Login to add items to your list, keep track of your progress, and rate series!
Description
What do you do when the MMO you’ve run for 15 years comes to an end? Akira Ono didn’t get much of a choice — he woke up trapped inside the world of his own game in the body of his in-game character: the Demon Lord. With an outcast child as his sidekick, he tries his best to survive the cruel fantasy world of his own creation, prosecution from the good guys, and of course, the final boss. 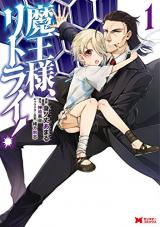 Isekai with op protag and a bunch of lolis...
by PageD
November 29th, 2021, 6:15pm
Rating: N/A
i couldve turned off my brain and just read it, but its like every 4 chapters we get introduced to a new loli..
in the first 2 chapters theres 2 loli thats introduced, one of them wants to sleep with the protag plus there's a panel where its an ass shot of the first loli and the other loli got a spanking.( bunch of suggestive content that's pretty weird and disgusting to me but if you like lolis you would like this ).
art : 3.5 out of 10
Was this comment useful?  Yes

Too Many Lolis and Isekai Tropes
by BrotherRoy
March 8th, 2019, 5:12am
Rating: N/A
While I'll agree with Laclongquan and Sederva that ohkimch's review seems to be spawned from over the top outrage, there are indeed too many lolis in this manga. Looking at the source material, a Web novel and Light novel's information and reviews, more lolis are to be expected. At least, the artwork for the Light Novel has the Luna character appearing a bit order on the cover than she does in the manga. However, in the reviews there are talks of time skips, so there's that.

As far as the story goes, it's your basic "another world" set up with some changes. Instead of the MC being the usual average person or high level gamer transferred to a fantasy world or game-like world, the MC is a game creator transferred to another world in the body of one of his characters with the nickname Demon Lord with the ability to use his game creations so long as he has enough skill points to purchase them with a creation skill. He also has his character's game skills. While the MC's Demon Lord character seemed to be the villain of the game he created, he is not the Demon Lord.

One of the trope it suffers from when it comes to isekais is the plot forced or MC's desire to stay under the rader while not staying under the radar. In this story, whenever the MC decides he wants to hide his usual face, he switches to a character he seems to not be able to control for some reason. Like most isekais this is done when the MC suddenly wants to be icognito at some particular point in the story despite having just performed an action that would make him well known.

The other problem with this is when an older woman is introduced, she falls for his alternate persona rather than the usual persona of the MC. Oh, the WN and LN both have harem in their genre tags as well, so it's obvious the lolis are included in that along with an assistant the MC summons that he created in his original game world. So far she is an Evil Science Genius who for some odd reason MC made into a shotacon, but it's played up for laughs so far since only one shotacon boy has shown up and she hasn't met him. Still, she has shown emotion in response to MC's praises and has internally monologued how that feeling was new. So it's possible she would be one of the few older females attracted to him.

Still, so far whenever he switches to his alternate character, who has his own personality again, it's always done in front of the people who think MC is evil. Thus, they see his alternate persona as a hero and still see MC as a villain. It makes no sense. MC rationalizes this as somehow reducing his exposure so he wont have to answer questions (again that isekai trope of being icognito while not being incognito) but given MC wants to clear up the misunderstanding that he's not a Demon Lord, you'd think he'd swoop in and do the deed without switching character personas? Again, when he does it, it's in front of many of the adult women who then favor his alternate persona rather than him.

Then when he speaks with them, especially the rational saint female, he comes off as the Demon Lord like he's playing a part rather than simply say his intention is not to do evil, instead to investigate the angels and simply do things that benefit himself and those around him? Yet, his intention up to this point was to clear up the misconception that he was the new Demon Lord of their world.

Another issue with this story is it lacks direction like many isekais. So far there are only 11ish chapters at the time I write this review and the MC has started a plan to start a business while investigating who brought him to this world. He knows the small fry who did it, but is looking for a stronger power, a deity who backed the small fry. However, the small fry, called Satanist, for some odd reason in this manga, have been constantly getting in the way with their rivalry against the supposedly good religious group in the story that worships three mysteriou angelic beings.

Is the story horrible? No. Well depends on your feelings about lolis, I can't justify them as I said, but their insertion so far is tolerable. It's not like another isekai manga where the lolis were throwing themselves at the MC sexually. So far there seems to be one-sided romantic feelings coming from the lolis whereas the MC sees them as a father would a daughter, well at least one loli. The other he antagonizes because of her attitude.

Dandy demonlord
by Laclongquan
June 3rd, 2018, 3:40am
Rating: 9.0  / 10.0
A game designer get transfered to otherworld as his creation, dandy overlord, by the way of some satanist's summon.

As a manga it's quite different from other isekai tittles due to the dandy approach. So it's a recommended.

As for the pedo approach: non-existent other than something implied for the obsessed. Bad news, I know, but this is dandy manga, not lolicon.
Was this comment useful?  Yes

There is no sexual, or even romantic content whatsoever in this manga as the previous review implies, especially with the male/female leads where one is an older male and the second a female child. The dynamic is closer to a new adoptive father and child using an isekai as a base

I would not suggest paying any attention to any reviews whatsoever on manga, by somebody who doesn't even understand the concept of corporal punishment.

Pedophile's fantasy my ass. Please remove yourself from the internet, and if not, at least from sites that might 'trigger' you.


*Actual review*
That being said, the manga's art style is solid, there's no visual noise and we're not loaded down with loads of exposition we've all seen a million times in these isekai. The child Aku is more of a plot device at the moment, but I'm hopeful that an interesting relationship could be formed between a man the world has labeled evil and his adoptive daughter. I do have some issues with how some of the information has been glossed over, I.E. our Yakuza-esk protagonist seems to not use magic because he was an administrator in his game before being transported, but still has skills that may-or-may-not use magic... This will likely become clearer with time.

The manga seems to be on a monthly release schedule so unfortunately it will be a while before we really get any answers.
Was this comment useful?  Yes

Gross
by ohkimch
April 12th, 2018, 1:33pm
Rating: 2.0  / 10.0
Another shounen transmigration with questionable "romance" and an overpowered but charismatic male lead.

The whole being-treated-as-a-pariah/as-a-demon(lord) has been done before. The only unique part of the MC was his being placed in a middle-aged AND unattractive body. If not a bishounen, usually the lead is either young and "average" or plain-looking, or older and handsome.

The portrayal of females is, as always, gross and degrading. I've been unwillingly acclimated to this distasteful constant in shounen fantasy, but. It was particularly disagreeable because the MC looks like someone's greasy father or uncle.

As a result, the series reads as a middle-aged pedophile's fantasy.

Sure, he may be a NEET in his 20s on the inside, but he's physically an old fart, and he's still a grown man either way.

His blushing when the little girl wants to sleep in the bed with him, and her blushing with a "dokkun" when he carries her... and the spanking scene with the other little girl...Ew?? Gross. Disgusting,

I give it a 2/10 for what could have been, and the hard work of the scanlators (who did a great job).
The pedophilia and misogyny on their own would get a negative score.
Was this comment useful?  Yes