Login to add items to your list, keep track of your progress, and rate series!
Description
Tsuna comes home one day, only to be greeted by a little baby mafioso who apparently is his new home tutor. His job is to guide Tsuna into his role as the 10th Boss of the Vongola mafia family. With the help of all his new friends and an array of special items such as the "Dying Will Bullet", he might just be able to do it. 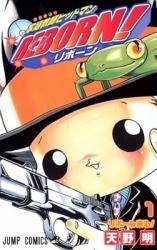 Very good but...
by MemeYakuza2019
January 19th, 2022, 6:59am
Rating: 8.9  / 10.0
the final arc was a little lackluster because I think there are areas that could use more exploration, plus other plotholes that were left unanswered in previous arcs
Was this comment useful?  Yes

Great Manga
by chad3lee
September 22nd, 2021, 10:51pm
Rating: N/A
This is a great Manga that is ruined by the fact that it has no resolution. You can see the MC grow through the manga, you see his progress, his change, his growth. He is no longer a child but a person with agency, only for them to turn around in the last chapter and say "JK we are back to square one". Also the second to last ark was a little on the nose.
Was this comment useful?  Yes

MASTERPIECE CUTSHORT
by LOW RETARDED Below
April 20th, 2021, 8:33pm
Rating: 9.0  / 10.0
Dont know what the other reviewers below me are talking about this manga is a MASTERPIECE, You cant really fault the first 60 chapters as it initially was only gonna be a gag manga similar to dragonball or kinnikuman but switch genres to action. Its approach to storytelling is much more consistent than most battle shonen specifically of the era like naruto.

The characters are anything but bland specifically the main characters tsuna,gokudera,hibari etc. They all grow as people and overcome obstacles they wouldnt have without the strife the mafia life put them through. Gokudera goes from a coldhearted asshole who only respects reborn,tsuna and his sister to a dependable ally and a real homie recognizing those he's shuned as worthy allies and adversaries to the family, Yamamto who clearly thought the mafia stuff was just a joke starts to re-contextualize his situation and adapt to it becoming a real swordsman and learning from his enemies among other developments to help his friend tsuna as one of the guardians.Reborn the poster character of the series is not only one of the best teachers in comics/manga but one of the best characters ever made he really lives up the title of the series in how he operates and teachers the crew. Every main cast gets there main share of development event if it isnt so subtle. People often rag on Tsuna for being the exact same way near the end of the story but he isnt, people often think"character development" means "radical shift in personality" which is clearly dosent if a character acquires more knowledge and utilizes it in a meaningful to better/change himself in a way that is the very definition of development not radically changing
a characters personality. Tsuna like everyone else DOES develop. Its the same thing with OnePiece.
Personality wise all the strawhats are the same even 900 chapters later but they have been through many hurdles and adapt to the ever changing narrative growing as people with new convictions and resolve to achieve there ambitious same thing happens in REBORN! as I mentioned prior.

Theres alot of cool characters moments and developments thats done far more consistently than must manga i've read and i've read alot just named a few but theres alot more, aside from few side characters but they all serve there purpose in the narrative. The villains,(most arent even real villains just antagonist to the main characters in certain arcs like Xanus or Mukuro) are great and all of them have logical ambitious for wanting to oppose the main cast that serve as proper foils to the main characters. And have there reasons for aiding Tsuna not because there "good people" or the "good guys" no ones an assassin the others a borderline sociopath and they make that clear even when there aiding the main cast later in the story ESPECIALLY Xanus.The second powersystem the ring and box system that is created is the most innovate in unique system in battle shonen even more prolific that hunter x hunter's nen. It was created and fined tuned specifically to avoid asspulls and deus ex machimas. Every fight is logical in unique due to how the system works. The art is absolute amazing and blows most manga out of the water i dont care how detailed something like beserk or vagabond is the artSTYLE of REBORN! far surpasses anything most manga could dish out in terms of atheistic and character design. Reborn is a very misunderstood series that often has complaints regarding illogical things false narratives such as "deus ex or bland characters" but you be the judge of that because i can assure you they are 100% wrong and definitely didnt pay attention theres a difference between something being objectively bad and someone clearly not logically understanding a narrative.

The only true negative to this is the final arc and the ending which is hit or miss but thats mainly attributed to the fact the manga either got rushed near the end or AMANO Akira got bored and just said screw it. Regardless of the reasoning keep in mind this manga sold over 30 million copies you dont captivate that many people making a work that isnt anything short of great but reborn is much better than great its neigh a masterpiece.

Interesting ideas, boring characters
by b-factor
December 16th, 2019, 9:24am
Rating: N/A
Reborn had a successful reinvention from a gag series to a supernatural action shonen. The manga has some interesting ideas, but the characters are very one-dimensional, and the plot is too formulaic that you felt you have read the same thing somewhere else. It's still enjoyable with battles happening quite often.
Was this comment useful?  Yes

A Classic of Shounen's Golden Era
by ChaoticOrder
October 16th, 2019, 3:03am
Rating: 7.0  / 10.0
A fun story, but like many shounens of this era they fall victim to what I like to call "The DBZ effect" Powercrep and repetitive formula. The power creep and repetitive nature kinda made it loose its overall enjoyment for me.
Was this comment useful?  Yes

Then it embarks on a standard shounen-fare with at least one arc that is pretty innovative and surprising (though the logic of it goes topsyturvy at times). Excluding the first 7-8 boring volumes and the last 70-80 chapters, it was an enjoyable read.

But with characters that are generic, a stupid level-up system that is all about "if X has to beat Y at time Z, then it will happen through a powerup, regardless of how incredulous it is." and an interesting overarching plot that eventually just... "meh". It's a very generous sixer.
Was this comment useful?  Yes

Nostalgic Memories
by Dioshurleyel94
October 20th, 2014, 5:58pm
Rating: 7.0  / 10.0
This will be a very personal review. First of all, I believe that I if had read this manga in these present days, my rating will be different. Is a story of a boy whose destiny is to become the next leader of a mafia family. Pretty typical nowadays. The only twist given to this was that it was played for laughs: the protagonist, due to his usefulness, couldn’t accept it.

Overall, all the characters are bland. They all could be described in a sentence. Still they were pretty enjoyable to watch. And it was easy to care for them. I personally found myself being very empathic with the main character. Likewise, the plot is something easily improvised by the author but worked fine…sometimes. Also, the fights were actually good. But that’s the least part I remember.

The thing that I found it to be the most outstanding is the art. It wasn’t so captivating at first, at least for me, but it gradually became its own thing. I believe Amano’s style is kinda charming. Her art has a personal touch that avoids a generic style.

Now my biggest problem: the last arc was terrible. When I mean terrible I mean it so. It felt so purposely anti-climactic: wasted potential, sudden plot elements that weren’t even showed before, bad structure itself. The ending also killed it for me. I remember feeling hope that at least the conclusion will be great. But at the end every sign of character development of the main character is thrown to the trash can. It was obviously a rushed ending, but I still don’t get why it happened like that.

In summary: Reborn! isn’t something new nor is a masterpiece (is far away from that). But it had potential to be an enjoyable story until the end. And I really want to share it as such, but I can't.

I will only recommend this to those who are in an urge to read something. Or to somebody with a lot of spare time and who doesn’t care about reading something that may leave some mixed feelings.

Different Kind of Shounen
by yduran7
June 11th, 2014, 8:46am
Rating: 10.0  / 10.0
If you're looking for shounen where the character's emotions somehow turn the tide of the battle through no logical manner whatsoever this is not the manga for you. I love this story. The battles are well thought out and every character is so memorable. Are they one dimensional? yes. But most shonen that have as many characters as this one does tends to have the same issue with characters. Although the 'comedy' chapters are just awful and maybe after coming back from the future it should've ended like in the anime, I am a fan of KHR always.
Was this comment useful?  Yes

Read it as whole!
by Lovey-Dovey
November 23rd, 2013, 4:32am
Rating: 9.5  / 10.0
I remember that I finished this series last year and it left me with no amazing impression, the plot was average, the main character was weak etc.....well, just the art was astonishing...but few days ago I came across this series again and because I missed the art (I totally remember how I was in love with Mukuro, Yamamoto and basically with all black-haired characters

) I decided to re-read it again and it was worth my time. Even thought the first 70 chapters were fucking slow in development and sometimes it got boring, I got through it and it became better as story progresses. On plus side there were some noticeable characters development, and I loved future arc...The art could not became better. Everyone is so hot. I remembered Tsuna as good-for-nothing guy, but now that I have re-read the series all over again in few days I changed my opinion about him. I think that you should read this whole at once, as I started reading this series few years ago and so waiting for new releases disturbed the pace, but now when it's complete it's whole different matter. Try it!!