Login to add items to your list, keep track of your progress, and rate series!
Description
1) Ill Natured Lip
Salaryman Takafumi has fallen deeply for his childhood friend, and neighbor Ryu, who is still in high school! But Ryu always gives him the cold shoulder, which worsens as time goes on. What is happening?

3) Neighbor Love
Ikuo and Hyuuga are neighbors that are friends, and maybe something more?

4) The Key of Bonds
Nara and Hirao are college students who just sort of fell into a relationship. But Nara is getting more serious about the light-hearted Hirao.

5) A Kiss Sweeter Than Honey
Takumi's o... More...
1) Ill Natured Lip
Salaryman Takafumi has fallen deeply for his childhood friend, and neighbor Ryu, who is still in high school! But Ryu always gives him the cold shoulder, which worsens as time goes on. What is happening?

3) Neighbor Love
Ikuo and Hyuuga are neighbors that are friends, and maybe something more?

4) The Key of Bonds
Nara and Hirao are college students who just sort of fell into a relationship. But Nara is getting more serious about the light-hearted Hirao.

5) A Kiss Sweeter Than Honey
Takumi's older sister is often brought home drunk by her coworker, Sasaki. But whenever Sasaki comes over he brings Takumi delicious desserts.

6) Innocent Smile
Ryou's going off the college and Takafumi's freaking out! Less...

Latest Release(s)
v.1 c.1-5+Extra (end) by Dangerous Pleasure over 15 years ago
Search for all releases of this series 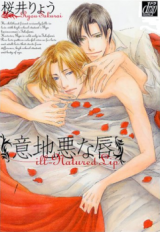 Quite mediocre
by OmNom
April 20th, 2014, 4:35am
Rating: N/A
I don't know what people have been reading, but this collection of one-shots is way below the tolerable level for me. The stories are all too ordinary and the story-telling didn't do one bit to help, meanwhile the characters are honestly too dull and uninteresting, mostly because the author never tried to dig deeper than the surface to explore and develop them further. Why are all these characters in love with their partners in the first place? And aren't all the 'confessions' and development so out of the blue? I felt really dissatisfied with so many questions springing in my head. The smut is also not sexy enough to turn me on, even if the mangaka intended to portray love making between 'lovers'. All in all I'm not too impressed, tbh.
Was this comment useful?  Yes

The uke totally wears the pants in the relationship, which is always fun!

The other stories didn't really make an impression though :/
Was this comment useful?  Yes

Cute One-Shots
by brid
October 18th, 2008, 2:45am
Rating: 8.0  / 10.0
I totally agree with angelkurisutin: the one-shots in this volume were all very cute and light-hearted, which made them a pleasure to read, but they were also noticably short and seemed to end very quickly.

There were a lot of positives to the stories in this book: pretty art, hot sex scenes, no over-the-top angst, no rape, and no overly girly ukes (thankfully, the mangaka allows men to look like men)! However, despite the positives, what makes me hesitant to fully recommend this series is the general lack of plot and character development in the stories. Given the length of the stories (each was around 25 pages), and the fact that as angelkurisutin mentioned, there HAD to be a sex scene in each oneshot (thereby taking up even more valuable pages), there was just no way any of these oneshots were going to develop into anything truly memorable. Which is too bad because it feels like there's a lot of potential here. The schoolteacher/movie director chapter, for instance, easily could've been a full-volume series as the director seemed like an interesting guy, what with the subtle way he was wooing his neighbor. And I would've liked to have read more about the couple in "dessert man" chapter; I think this really could've been a fun story if it had been expanded.

All in all, I'd say that if you enjoy comedy, romance, and don't mind very short oneshots, then give this book a try. On the other hand, if you tend to dislike oneshots, then I wouldn't recommend this one as it won't do anything to change your mind in favor of short stories.
Was this comment useful?  Yes

1. ILL Natured Lip- This story made me giggled. I wasn't expecting a cry-baby seme...oh well, I liked it.
2. Unspeakable Innocence- Cute. Funny....makes me wonder if I have a fetish for guys who have glasses LOL.
3. Neighbor Love- Nice story. Liked the ending.
4. The Key of Bonds- Awwww...literally. A sentimental kinda story (a deeper-ish plot than the others)
5. A Kiss Sweeter than Honey- Drama-ish but *smiles*. Yummy!
6. Innocent Smile (Extra)- Silly. Hot. Funny.

P.S. I just realized how hot and sexy the guys are while they're doing it in every chapter. *drools* over Takumi's body in the afterword sections, he looks so yummy!

A light read with smexy & pretty shinies
by cut
March 30th, 2008, 8:53am
Rating: N/A
I think this manga concentrates more on well illustrated smexy scenes because every story had a creative approach lol. Sensei draws faces & hair so well- they are all pretty! The clothes & fashion styles too! xD I only wish the characters bodies were less bony O_o.
Was this comment useful?  Yes

Ijiwaru na Kuchibiru
by angelkurisutin
August 24th, 2007, 7:00pm
Rating: 8.0  / 10.0
The artwork was nice and the stories were cute, though they had the usual type of storylines. It seemed as if it was made a point to have a sex scene in each story, but I think some could have done fine without; however, that's just my opinion. -_-;; I kind of wanted to see more character development, but this is a collection of short stories after all. ^_^ Overall it was a nice read, but nothing out of the ordinary.

Average
by pinklotus89
April 13th, 2007, 3:08pm
Rating: 8.0  / 10.0
The art work is nice. The stories are enjoyable, though a bit typical. I did not like the cover story because the seme was just so whiny and annoying. However, I really like the couple in the 2nd story. That one was funny.