Login to add items to your list, keep track of your progress, and rate series!
Description
Akino is a successful advertising executive and leads one of his company’s creative teams. Sparks fly when the young hotshot Kurata is assigned to work under Akino on an important campaign. Kurata seems determined to challenge Akino at every turn. Is there more than professional rivalry behind Kurata’s actions? 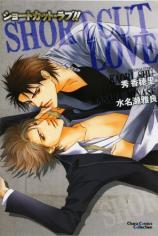 it gets better~
by Maria-Ayako
September 20th, 2015, 2:29am
Rating: 8.0  / 10.0
At first it wasnt so awesome, with the rape and all, but later it became better and the end was sweet and lovely~ kinda would be better if it was a bit longer, but well it was good anyway.
So i didnt like the art much, coz the women dont look much different from men. There was much about the work there, kinda more than needed, i wasnt so interested in the work stuff of it. The characters were likable. The h scenes were okay. And i was glad the uke didnt cry much x)
If u are in the mood for a serious work stuff without much comedy or cuteness, then u should try this.

Bland plot
by Rika-pjong
June 21st, 2015, 10:59am
Rating: 6.0  / 10.0
I rated this 9 when I first read it a few years ago ... which I simply can't wrap my head around now as to why! My taste must have changed these past years, because now I find this manga to have a bland plot and lacking drama and depth. The characters were quite shallow and could have been more complex, since I found the couple's relationship a bit lacking and unrealistic. The main reason being that I'm way past thinking that rape equals love. That didn't go home with me this time!

Heh
by blueseeker
November 22nd, 2011, 7:40pm
Rating: 8.0  / 10.0
It's not often that i read something by sensei after finishing another of her stories, and like it. Because too much sugar/junk food is just not good for the stomach. Surprisingly though, i really enjoyed this one, after finishing a longer series. Could it be because the plot was written by someone else? I would love to see what else the author will write in future.
Was this comment useful?  Yes

I love an uke with snap, crackle and pop. None of this crying damsel nonsense, so I liked this.

But I don't know if it's just that they're horrible ad men, but their ideas pretty much SUCKED (the last idea was a bit better, tho). Or maybe it's just a personal or cultural or translation issue... I couldn't even read them after a while.

I love the combination of this author and artist. I usually love Minase's art, but her stories can get...weepy. Shu seems to have more edge to her stuff, which I love!

different author
by jellaaay
May 15th, 2011, 3:04pm
Rating: 8.0  / 10.0
It was nice but something felt different. Then I noticed that the author's different. Minase-sensei's stories are usually more dramatic. Not that there I like a lot of drama. But the extra left me wanting more... compared to Minase-sensei's works which always leave me satisfied. Anyway, I like the fact that it centered on the two lovers. There were no former lovers or third parties involved, etc etc. It usually gets annoying when other people come in, uke or seme wavers, starts to feel insecure, the usual.

better than average
by pleochroic
April 13th, 2011, 2:50am
Rating: 7.5  / 10.0
this actually had a better plot than the last few i read by minase, which might well be because she didn't write it herself; though it fits her style like a glove -- that's some inspired collaboration. i'm gonna give extra points to shu thinking up an advertising campaign that could actually work in the real world; it doesn't happen often in BL that a mangaka depicts a business workplace in a reasonably realistic manner. i probably also filled in some of the holes -- the reason akino is so intent on keeping kurata on the project is that the account is immensely important; that didn't really come across in the plot. i also enjoyed the secondary characters; the bickering was fun. i'd love to see sakikabara in his own story.

where the manga falls short is in the relationship development. it starts, as usual for a minase plot, *snrk*, with the raping. also as usual, i am not fond of that device, and especially not if the rapee gets so turned on by the rough sex (without lube, i might add, *shudder*) that he just wants more of it. i'd have liked to see more happen between the rape and the consensual sex; it completely trivialises rape to treat it this way, and that just doesn't sit right with me. i don't really see here how akino moves from being raped to being in love. and as so often with minase, i don't really connect with the characters; they're hot, ok, but where is their soul, for lack of a better term?

the art is pretty as always, but the characters are still interchangeable (between manga) ; they don't have a unique look to them, and if i read several minase works in a row, they all blend together. so yeah. better than some, not as good as her earliest work, which IMO remains her best.
Was this comment useful?  Yes

Yeah, it's okay
by kurosu_yuuki
November 15th, 2010, 10:00pm
Rating: 7.5  / 10.0
Cute. Not a suuuper developed plot, but enough to get my attention all through it.
Akino's nice and isn't annoying, Kurata's gentle and sexy...yup, they're fine.
Not as special as to be one of my favorites, good for killing time and even got me crying a little.
The art is really good, as expected from Minase Masara-sensei.
Worth reading, in general.
Was this comment useful?  Yes

Lovely
by Sakura_Hikizaki
October 3rd, 2009, 8:50pm
Rating: 10.0  / 10.0
Such a lovely read! I really enjoyed. MInase art was beautiful in this one. The story line was so interesting, I was drawn into the story to the final page. An over all lovely read

Mixed bag.
by yblees
January 29th, 2009, 7:03pm
Rating: 6.5  / 10.0
I agree with ZeroNine that the plot is so Minase Masara it's hard to believe she didn't write it. No complaints about the art at all. I felt the story was technically brilliant (in particular some of the details of the advertising proposals are so realistically clever, for a while I developed a false memory that I had actually seen the ad on TV!), but the plot and characters somehow lacked depth.
Was this comment useful?  Yes

Full points for a plot that isn't self absorbed
by lozzenator
November 14th, 2008, 3:51am
Rating: 9.0  / 10.0
Surprised to hear that this is Shu Kaori's writing and Masara Minase's art- but it made for a really good read. I think this is Masara Minase's best manga. Gokujou is getting tedious because the plot sometimes leads nowhere and goes in circles.
Was this comment useful?  Yes