Login to add items to your list, keep track of your progress, and rate series!
Description
Senou Natsuru is a normal high school boy. One day he wakes up to find himself turned into a girl. A stuffed tiger "Harakiri Tora" comes to life and tells him to fight as a female psychic fighter "Kämpfer". Having no idea about what's going on, Natsuru is involved in the battles against other "Kämpfer".

Kämpfer is German for fighter. 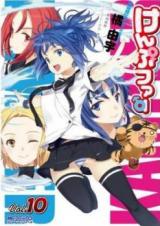 Note: You must be logged in to update information on this page.
Forum Posts Click to view the forum
Kämpfer to End in 10th Volume
over 9 years ago
Kämpfer's New Anime to Air Next March
over 9 years ago
New Project?
over 11 years ago

Bog standard LN story, adapted okay
by zbo14
June 3rd, 2018, 4:15pm
Rating: 6.0  / 10.0
My review is more of the adaptation of the LN rather than an overall comment on the story, which as far as stories go, is pretty bland. The entire Kampfer concept feels like an afterthought, and that's no different in the adaptation. All that said, the art style is decent, and the retelling of the story in the manga format is good.

Spoiler (mouse over to view)
I thought the ending swap was rather ham-handed and wasn't terribly impressed. It feels more like a couple pages in the end could have been changed to give it either of the three endings.

Best Manga Ever!!
by Killachris97
March 30th, 2013, 1:21am
Rating: N/A
This is well maybe not the best manga ever made but it ranks in my top 5 for sure!!! 1. Dragonball 2.Naruto vs. Kampfer 3. One Piece 4. To love ru 5. Death Note. Seriously watch at least 3 episodes to get the plot of the story! Natsuru is a freaking ladies man but he is like so clueless is hilarious. Everyone is going after him yet he keeps his eye only on one girl and that is deep! The author is trying to get his point across through natsuru!! Watch the anime!!!!
Was this comment useful?  Yes

Not great, but not awful either, its just ok
by MangaGhost
March 12th, 2011, 7:16pm
Rating: 8.0  / 10.0
I like it but to be honest story starts off a bit weak and the action scenes aren't that great. But the girls are drawn very nicely. Some of the jokes aren't too bad and some are your standard recycled ones. The whole idea with the strange and twisted stuffed animals works for me.

Story gets a bit better with group of characters trying to figure out what's going on. Its still a bit too early to tell if it will get better or worse, as there has been only about 23 chapters translated so far. If the author tries to keep it at only the harem and gag level it will probably be just total fluff. If the author instead explores some of the serious elements that are already in place, it could turn out interesting. But its totally up to the author at this point to make the plot more interesting or not.

I will give it an 8 for now because I am entertained, and its not grossly terrible like some other manga I've read. But my score is subject to change...
Was this comment useful?  Yes

Underrated
by Scormio
September 15th, 2010, 2:54pm
Rating: 10.0  / 10.0
I think this series deserves more attention then it gets. Yeah, it might seem like it has a lot of cliches at first, but it definitely has a lot more depth than people give it credit for. Plus, the characters are all likable and well developed.

Lame or not.
by Helzagore
March 10th, 2010, 11:16pm
Rating: 9.0  / 10.0
Story is building itself. From the start there is no way to predict what happens next, and manga is like walking in thick fog. I kinda like this kind of mangas because after storys ending is predicted, it tends to turn less and less fun after each chapter. So far there has been no reason to worry about that in this.
Telling the base of story works in the most series, but its kinda refreshing to read these "irregular" ones too.

Lame
by splight
March 8th, 2010, 6:28am
Rating: 6.0  / 10.0
From the very beginning it was clear to me that author had no plot for the series whatsoever. Weird girlies with weird bracelets keep fighting one another for no apparent catch or reason. Main hero/ine (your standard good for nothing) accepts all that without much of a fuss. In school girl form of that hero attracts most attentions not from guys but from girls, giving impression he was studying in some weird coed timid boys / raging lesbian’s school. As author's supply of plot ideas getting thinner and manga drowns in yuri, it was picked by anime producers. Lets say, anime have mostly the same plot and standard lame ending for situations, when peoples don't know how to end it (and even why it had begun).
Was this comment useful?  Yes

I don't know why there are bad reviews for this. The ecchi isn't even that prevalent in this series. It's a lot more toned down than most other manga with the ecchi tag.

Don't listen to the bad reviews. If you are looking for a really fun manga give this one a try! I assure you you won't be disappointed!
Was this comment useful?  Yes

Decent manga but LOUSY anime
by drunkguy
November 13th, 2009, 3:18pm
Rating: 7.0  / 10.0
It's amazing how many bad reviews came out for this series right after the really crappy anime came out. Word of advice to anyone who feels like following this series, the manga is not the anime. The anime cut corners and rewrote the plot from the light novel for the worse.

The manga is actually pretty good for what it is; a genderbender with magical girl elements. The art isn't bad, the humor is present and the story actually has potential. There is fanservice but it isn't as if every chapter has a pair of naked breasts flying in your face every panel. It is worth a read if you like genderbenders.
Was this comment useful?  Yes

Can I say it's crap?
by godgiven
November 12th, 2009, 5:57am
Rating: N/A
Is this supposed to be seinen? I'm not in to same gender relationships but this is the worst. The protagonist is different in this kind of genre, well not the typical weak willed loser but it's worst. I can't believe this has a better reception than Chrome Shelled Regios

Terrible terrible manga
by CrimsonRuby
October 31st, 2009, 2:15pm
Rating: 1.0  / 10.0
The main character is a pushover one-dimensonal idiot that is totally hopeless, naive and unprepared for his Kampfer battles. I mean, after turning into a girl and gaining magical powers, you would think he would take it more seriously. But he doesn't. People are shooting at you and trying to slice you with a sword, and you still think your life is any normal!? And while all of this happens, you're worrying about girl problems (which he is a total pussy about). And then you get pushed around to do whatever the hell the other party wants (why would you want to go to school in girl form and stay in it longer than you wanted to). How the hell is he a guy? Really. He pisses me off so much.

Anyways, if you can get over all of these problems and overlook the main character's outlandish flaws, then you might enjoy this manga.

PS. I don't see how it's a seinen manga.
Was this comment useful?  Yes