Login to add items to your list, keep track of your progress, and rate series!
Description
After his tragic death, Minato was reborn in a world where Offensive Magic has not been banned. He was thrilled to see that Offensive Magic for the first time, however he couldn't help but wonder why all the magic circles are so inefficient?! After witnessing how ineffective the magic in this new world is, he decides to use knowledge from his previous, far more advanced world to improve it. Come along on Minato's quest to improve the magic of his new home! 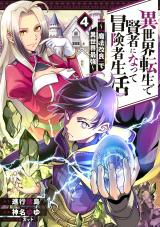 Decent but the Numbers Don't Add Up
by LazyReviewer
September 5th, 2022, 4:10pm
Rating: 6.0  / 10.0
The art is pleasant enough and the main supporting characters have a personality that's more than one dimension, but the MC is yet another victim of Isekai authors selectively making characters lose their common sense and act like an imbecile for no reason other than artificial plot drama.

But when I say the numbers don't add up, I mean that literally. The MC was reduced to 20% of his mana, then cast a huge spell and is still at 20%, which just happens to be the perfect amount of time needed to deal with the problem at hand.

This was after spending 80% on a single spell... which was preceeded by slinging expensive spells en masse. He had to have started with 140% at least, but that's just what the numbers add up to, not what the manga claims.

The manga makes a big deal about the amount of mana that's available, but then completely disregards it whenever the plot needs an extension. Like, when there's 6 hours to rest and regain mana and become more useful—and remember, he's the smart colleague who knows how to keep his magic research colleagues on track as is pointed out a few times already—he decides to do everything in his power to stay up and spend that 20%. And now we have a plot where the 20% (which has been unnecessarily powering a big spell at seemingly no cost despite the story telling us it's a big cost) must hold up for 2 days.

Oh, and only now does it occur to the magic researcher that the spell might disappear once he falls asleep despite not sleeping for 2 days already.

Are you flipping (a table) serious?

Just a little bit of planning and logic would prevent silly, stupid stuff like this.

Spoiler (mouse over to view)
There was a golem that the MC, who has used magic all his life and studied it as a career, one-shots. But the author chooses to make the MC suddenly deaf and cast 20 more... but this is done without the goofy/exaggerated faces that should accompany a comedic scene, and there's an emphasis on amount of mana used overall, so the scene becomes completely tone deaf and breaks my immersion.

With that said, the world is interesting, there is some care taken to prevent total break of suspension of disbelief, and there's a potential here that will keep me coming back for at least a few more chapters (I've read Ch. 12) to see whether the author gets it together or loses the rest of it.