Login to add items to your list, keep track of your progress, and rate series!
Description
From Fujoshi Bitches:

A shriek was heard as a sailor uniform skirt fluttered, and Meguru thought himself a lucky perv till he caught a glimpse of... a guy's boxer shorts?

By chance, he ended up inviting the high school boy in girl's uniform, Keiichi, to his place with the mystery of why he wears that uniform still unsolved.
Unwittingly, however, Meguru discovered the reason behind Keiichi's uniform...

Two hearts entwined and a tale of first love,
to reach out to get closer to your heart.

"That uniform, are you wearing it 'cause you really want to?"... More...
From Fujoshi Bitches:

A shriek was heard as a sailor uniform skirt fluttered, and Meguru thought himself a lucky perv till he caught a glimpse of... a guy's boxer shorts?

By chance, he ended up inviting the high school boy in girl's uniform, Keiichi, to his place with the mystery of why he wears that uniform still unsolved.
Unwittingly, however, Meguru discovered the reason behind Keiichi's uniform...

Two hearts entwined and a tale of first love,
to reach out to get closer to your heart.

"That uniform, are you wearing it 'cause you really want to?" Less...

Latest Release(s)
c.1-5 + Extra (end) by Fujoshi Bitches over 6 years ago
Search for all releases of this series 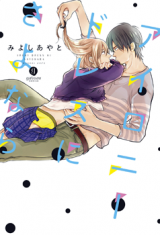 I like this.
by hinori92
June 6th, 2019, 9:48am
Rating: 9.0  / 10.0
I like how they relate to real society, like the actions and behaviour the try so hard to show that they accept you, but rejecting you at the same time. I get so mad when things become like this. If they cant accept, just say it out straight rather than faking them. It hurts more when you pretend to accept.
Was this comment useful?  Yes

simple and unambitious, which is good
by gwkimmy
January 12th, 2019, 4:13pm
Rating: N/A
I actually enjoyed this manga quite a bit. The premise is simple and executed in a straightforward manner. I don't understand some comments about weird humor and awkward drama...I didn't see any of that at all. The only humor I saw was everyone drawing attention to the fact that Meguru is almost 30 and basically preying on a high schooler (which in of itself is like HAHAHAHAHAHA *sweatdrop* humor, but at least Meguru had the decency to play along and admit he was a fucking pervert, can't win all the battles) and the drama is played out lightly. We really only saw one scene of overt bullying and one scene of the mother being an insufferable bitch, and both times Kei handled it like a pro, which serves to display the strong character that he is and that he's ready to handle the challenges of adulthood, as well as to contrast him to the adult Meguru who couldn't even come out to his more accepting mother and succumbing to teenage feelings of infatuation with Kei.

I normally dislike mangas that have adults trying to have serious relationships with young teens, and I know that this story requires a certain context to work, but it drives its narrative pretty effectively and without too much sexual titillation. We didn't even get a real sex scene for crying out loud, which I almost wished they left out entirely if they weren't building up to it, haha.

It's just a sweet story of an adult gay supporting a baby gay with a cute love story thrown in, scarier contexts of predation and all that be damned xD I can't really complain, lol.
Was this comment useful?  Yes

Very Relatable
by peachyney
October 2nd, 2016, 3:09pm
Rating: 8.0  / 10.0
I really enjoyed reading this one. It dealt with two actual gay characters and the different problems they face. The mangaka kept it light in such a way that it dealt with serious issues without being upsetting. Giving the main character a safe space to be openly gay doesn't happen too often in yaoi so I was pleasantly surprised. The flow was a little awkward but with the amount of space to tell the story, and the way the character were portrays, I think it worked out fine. The art is, of course, fantastic as well.
Was this comment useful?  Yes

wooooa so good!!!
by Maria-Ayako
October 2nd, 2016, 2:04am
Rating: 10.0  / 10.0
tho i wanted to see more of them and it felt short,, i cant help but really love this story!!~ i like slice of life manga's and here it was really feeling REAL and i liked how the reason for his cross dressing was unusual. i like cross dressers in manga and i find it interesting, as for their reasons and how they think of themselfs etc. this manga was interesting in the cross dressing part, as in the BL part and in the slice of life part. the art was nice and i loved both the seme and uke.

good, but could be much better
by im_uni
September 29th, 2016, 3:30pm
Rating: N/A
I like the artwork, but I caught myself thinking all the time, 'Oh, this face's off' (e.g. the 'cover' of the 4th chapter; the 14th page of the same chapter - 'his eye, his EYE!'), and 'Oh, he broke his neck' (e.g. ch2, 8th page and many many more)... and, well, when these things happen so often, they are really distracting. Concerning the story, I think it's really good, but I'd like to see more about the boy's mother... I think that for her importance in his life, not enough attention was given to her, and it's a shame, because the focus on her could make this manga really psychological and so much better. Also I think that this one is worth another read after some time, so that you could trace all the moments when a certain object is shown and how the protagonist's attitude changes towards that object, and what it signifies for him. That's an interesting clue, and you can't understand it fully after only one reading.
Was this comment useful?  Yes

Enjoyed this
by 801crazed
September 29th, 2016, 12:31pm
Rating: 7.5  / 10.0
I enjoyed this volume, though the flow could have been more seamless. I do think that the sensitive issues in this were better handled than the other manga I read by this mangaka. I wish the past relationship between Meguru and his late mother was expanded on a bit more.

Considering what mainstream Japanese society thinks of Okama, Keiichi's mom's reaction doesn't seem so far fetched. The resolution to this bit is pretty quick so you might miss it if you skipped a panel.

The art was very pretty. But the story left me somewhat wanting more closure.

Awkward flow
by xono
September 29th, 2016, 8:33am
Rating: 4.0  / 10.0
The chara art might be good but it got buried by awkward flow of the story. The scenes or charas conversations and/or actions don't flow naturally. I got the feeling of reading an amateur work.

Good!
by Tentacle
September 28th, 2016, 4:03am
Rating: 8.0  / 10.0
I like how lighthearted this is although the subject is serious. The mother who tries and fails, the older man trying to guide someone younger and the high schooler who is trying his best in the only way he knows how.
It's not a masterpiece but I'm really glad I read this!
Was this comment useful?  Yes