Login to add items to your list, keep track of your progress, and rate series!
Description
A story based on the concept of Frankenstein. The late scientist Victor Frankenstein's papers on the creation of a "frankenstein" are being put to use, and Fury Flatliner, motivated by revenge, sets out to kill them and their creator.

Note: Volume 10 of Busou Renkin includes the pilot story Embalming —Corpse and Bride— along with liner notes for both it and Busou Renkin. 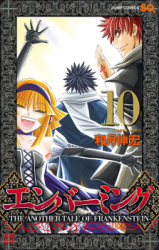 Note: You must be logged in to update information on this page.
Forum Posts Click to view the forum
Rurouni Kenshin's Watsuki Ends Embalming Frankenstein Manga
over 7 years ago
Romance?
over 9 years ago

Reply to the "lack of research on" Frankenstein comment
by chronicsleeper
June 21st, 2013, 12:39pm
Rating: N/A
I believe Nobuhiro Watsuki knows about Frankenstein being the name of the doctor. Partly because if you read his previous work, Buso Renkin, there's a reference to doctor Victor Frankenstein in the creation of the Kurogane, and the Books of Dr. Frankenstein which are used as a reference in the development of Frankenstein is based off of Dr. Frankenstein's work. It's actually quite obvious, especially in the oneshot of John Doe and his search for his perfect bride.

So yeah, this series is actually a pretty well researched thing based on the Frankenstein stuff. Not to mention, media named the reanimated bodies Frankenstein to begin with, so it's just logical to name them after the doctor that created them. And it's a manga, it doesn't really need to follow everything directly.
Was this comment useful?  Yes

...
by That3rdGuy
September 6th, 2012, 7:53am
Rating: N/A
Frankenstein is the doctor. The monster is... well the monster. It's not called Frankenstein. Why would a mad scientist call some hideous creature the same thing as people call him? Common misconception, but it ruins the story before even reading the first page as it show a lack of research on the author's part, even though it's as easy as googling "Dr. Frankenstein"

i like
by robbit
June 13th, 2009, 10:53am
Rating: 9.0  / 10.0
well. where to begin. this is certainly an original take on the frankenstein story. and its good
although it would be nice to see this in more regular serialization (maybe switched to 19 page chapters and moved to some weekly publication), it dont really matter. give it a read and pray for more regular releases. this has stayed quiet for far too long

Impressive
by emperor26
December 8th, 2008, 4:32pm
Rating: 10.0  / 10.0
Embalming is a far cry from what Watsuki-san normally does, but he has great success with Rurouni Kenshin and Busou Renkin.

His art, as always, are just awesome, the characters are nice, and the way he uses a concept about the dead and recreating it as the main basis for the manga gives me a good impression on it.
Was this comment useful?  Yes

just look at the author.
by Hetien
August 21st, 2008, 12:51pm
Rating: 8.0  / 10.0
Nobuhiro Watsuki. the guy that made Rurouni Kenshin. i mean, come on, if thats not a good enough reason, i dont know what is. darker than RK, as it deals with undead, but is drawn very stylishly and isnt overly gorey/scary as some undead manga.
Was this comment useful?  Yes

original
by konan45
August 2nd, 2008, 1:55pm
Rating: N/A
this is a interesting manga with powerful plot twists and several good main characters the art is really good and makes you wanting to read more
the only bad thing is that it is only 31 pages a month.
Was this comment useful?  Yes

Awesome, as expected from Watsuki
by SmileToCrisis
January 23rd, 2008, 6:38pm
Rating: 10.0  / 10.0
Love original references that haven't been used? Patient for it's chapter? Want something fresh and new? This manga is for you! From the same creator of Buso Renkin and Rurouni Kenshin
Was this comment useful?  Yes