Login to add items to your list, keep track of your progress, and rate series!
Description
A young wealthy businessman was suddenly kidnapped by a dark organization that he refused to work with. He was used as an experimental subject of developing new chip-based technology that gives the subject extra-ordinary abilities. Would he be able to escape and take revenge? 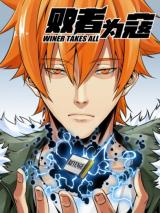 Quite good so far
by PZcolo
September 2nd, 2019, 4:27am
Rating: 7.0  / 10.0
Description is almost not existent so to put it shortly, it's the story of a guy that's CEO of a powerful medical company, he refuses to deal with the Brazilian narcos and his life goes to hell from there. I won't spoil anything but basically, he swears revenge on the guys who screwed him. Also, at some point, he's able to gain skills through chips which have some interesting side-effects.
So, it's interesting to see how his personality degrades, from the guy that would not resort to violence to further his position to a different mindset all-together. I don't necessarily like the changes but still, interesting.
Spoiler (mouse over to view)
The fu**er let's loose some scary people!, since implanted with killer you can see how he becomes a sociopath.
Also, the scientists are way too oblivious, suddenly all the subjects seam to be able to retain abilities of the chips used and the scientists didn't know? and how come all the subjects are so damn powerful? each and everyone got implanted with a killer chip at some point? Considering that the MC is supposedly the only resistant guy and that the previous subject had "broken down" after a few days, it seems unlikely.
There are a few liberties taken so it has some fantasy and sci-fi mixed in, like guys with super strength and as other series with a similar premise, that of inserting skills into a person (ej. transmigration), the author fails to account for the body, you can insert a violinist's skill into a person, but if his fingers haven't been trained he will not be able to play a well as the original. Same thing applies to almost any skill, and much more to fighting ones.
In any case, story is the classic revenge type with some mafia setting, it's pretty decent so far. Chars are all kinda bad-ass if that's your thing, I find the intelligent and cool headed MC interesting as are his changes, other than him the other chars have had little play so far so can't tell. World-building is not that necessary since it's the present, though the players have been well presented. Last, the art-style and flow of the action is quite good.