Login to add items to your list, keep track of your progress, and rate series!
Description
Shin Takamizawa has his own reasons to hate the Tachibana and is aiming for revenge. By coincidence, he finds out that the head of the Tachibana corporation is holding a boy imprisoned, Akito Toba, who seems to be very important to them. How far will Takamizawa go, and what are his plans for Akito Toba?

Latest Release(s)
v.1 c.1-5 + Extra by Forever More over 18 years ago
Search for all releases of this series 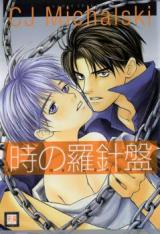 A Word of Warning
by Bunny-chan
October 17th, 2020, 1:21pm
Rating: N/A
Spoiler: Seme saves the Uke from an Ugly Bastard raping him.
Was this comment useful?  Yes

Terrible
by varianthart
July 29th, 2011, 2:09am
Rating: 4.0  / 10.0
This was so godawful. First off, it's insanely rushed. They fall "in love" after meeting for about thirty seconds and everything which follows is just as contrived. Second, the whole story was just stupid and not a second of it was unpredictable. It was beyond just cliche yaoi bad. The characters are one dimensional, but I'm not sure it would have saved them had they not been as most of them are thoroughly unlikable anyway. The art was ok, which was it's only redeemable quality for me. It's kind of a shame because I think the overall idea for the story had potential. This was the worst I've read recently though, and I've read some pretty tepid drivel.
Was this comment useful?  Yes

yes, dumb
by pleochroic
April 20th, 2011, 4:01am
Rating: 6.0  / 10.0
that started out promising, but quickly went downhill with too damn much raping. poor akito gets it from all comers -- and really, being raped by a butt-ugly old geezer is so totally not hot. and what the heck was wrong with shin? how in the world was rape the best choice at that point in time? and why not tell akito the truth right away? he has good reason for the things he does (minus the rape), and akito is smart. shin, on the other hand, that man is dumber than dirt.

the showdown at the OK corral... wait; at the villain's mansion is spiffy -- great action scenes. in general the art is trademark CJ michalski, plus extra ugly villains -- she's so good at those. the art is what lifts this above average.

dumb?
by emeraldglass
July 12th, 2009, 6:12am
Rating: 7.0  / 10.0
Spoiler (highlight to view)
minimal plot but relatively entertaining nevertheless. i thing i was really annoyed with was Tachibanna's hencemen are on their way to Shin's 'hideout' and instead of making a getaway-as anyone with a little bit of common sense would have done-instead Shin decides that he'll use the time to rape akito.
Was this comment useful?  Yes

In fact, although this manga mimics a lot of characteristics of the setting sun country, I like this BY FAR better than a western comic. The characters were all much more 'real' and they didn't wear tights. HO!

The supernatural talent was a good throw in too, what with Akhito wanting to be loved for himself, not what he could be USED for in a malevolent way. . .Awwww