Login to add items to your list, keep track of your progress, and rate series!
Description
From ShoujoMagic:

This tale of forbidden fruit is ripe with angst and taboo. Nineteen-year-old college girl Kasumi is traveling in Italy after a painful breakup. In Rome, she meets a handsome Japanese man and, knowing nothing about him, not even his name, she has a one-night stand with him. There should have been no chance of them meeting again, but when Kasumi gets back to Japan, she learns that fate has played a cruel trick! The man she slept with was Yoshiki...her younger brother!! And that's only the start of it... 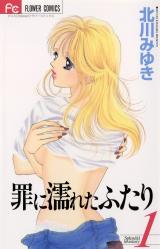 Note: You must be logged in to update information on this page.
Forum Posts Click to view the forum
Can anyone tell me the ending of Tsumi ni nureta futari?
over 10 years ago

Surprisingly Average
by IMKATE
April 30th, 2020, 3:55pm
Rating: N/A
I remember how I avoided this manga before because I've seen reviews how this one has the NTR feels and such. Surprisingly, I handled it well.. because it didn't affect me at all. Prolly because of the characters. You know how there are some people whose actions contradict their words and there are some who don't. You'd see both. The conflicts in the story are kinda repetitive though but what kept me going is how the two would end up.

If you're the sensitive type, who'd feel too much emotions for the first few volumes, then this is for you. If you aren't, well, still have a read.
Was this comment useful?  Yes

Forbidden Love
by jeffreymgibson
September 15th, 2019, 6:58pm
Rating: N/A
I liked the beginning. I also think forbidden love is hot. However, These cause of most of the problems is due to the main female being a complete and total whore. I started to dislike her so much that I didn't even want to read any more. After her behavior, you just can't root for her at all anymore. This story is certainly not about a couple of loved each other and stuck with each other until the end trying to overcome the issue together. It was more about just how much pain the she cause him before he has enough.
Was this comment useful?  Yes

Tsumi ni Nureta Futari Thank You Portrait
by Zeldon Starflight
February 24th, 2019, 11:34pm
Rating: N/A
This is overdue but for the fans of Tsumi Ni Nureta Futari, we made a thank you portrait ss celebration for our achievement of finishing the chapters (and it’s 20th anniversary), we made a portrait of me, avalanche (anonymous), the author Miyuki Kitagawa, and the cast of characters for our one wild ride! We can not be any prouder! Thank you.

the best!
by alexlim23
October 8th, 2018, 4:59am
Rating: 10.0  / 10.0
the only downside on this one is that kasumi has this type of character who's indecisiveness is on top level! like if you get rape you can tell the police or have a taser gun, taze his balls! wtf!
Was this comment useful?  Yes

Could have been great
by tyrantnyx
August 7th, 2016, 11:03pm
Rating: 8.0  / 10.0
This is a very good story and honestly most of the characters aren't that bad, however it suffers greatly because of the moronic main protagonist. I liked her at first but it didn't take long for her to reveal that she loves nothing more than being the cause of all the trouble around her. A lot of problems would have been solved if she'd just been honest with her feelings, but nope, gotta sleep with her friend for absolutely no reason. I still love this, but I feel so bad for her brother who was actually the only decent person around. The male lead is really the main reason to read this, everything else is meh

Not into it at all
by tipz
November 16th, 2014, 12:24pm
Rating: 1.0  / 10.0
I'm not into sibling love at all.. It just seems like it has better drama when it has to do with siblings.. I don't know what's with manga this way but it happens.. On that note this story is very annoying to read.. I was hard pressed to even read it up till this point. Everyone is so annoying besides the brother to me.. He seems to be the only one that is in control of himself. Art is okay.
Spoiler (mouse over to view)
a girl is on a seperation vacation and ends up having a one night stand with a guy she just met.. She goes back to japan to discover that the guy is really her brother.. My hey have very awkward moments until they end up hooking up together.. The friend that the sister has ends up sleeping with her and he still has a gf that wants him very much.. From there the brother continues to give up things in his life to be with her.. This is where the story turns out very very annoying.. The sister is such a loose, stupid, idiot woman that she is run over by everyone and keeps running over her brother. She keeps sleeping around. She keeps getting bullied by their mother. She keeps getting taken advantage of.. She has not strong bone in her body. The last chapter so far her brother is stuck in the states cause his ex gf burned his passport and she is about to get raped by the guy that loves her mom.. They all are psychotic.
Was this comment useful?  Yes

Good manga in the incest genre
by Omlil
February 5th, 2014, 12:31am
Rating: 9.0  / 10.0
I suddenly remembered it, though I've finished reading it long ago. what wasn't scanlated can be found in raw... unfortunately my Japanese is... nonexistent, so me and google translate became BFFs, but it is totally recommended for reading. True, it has lots of smut in it. Way too much in my opinion (hey, I love smut!) but the main male character was so worth it. The woman - meh.
Was this comment useful?  Yes

My fav :)
by homemadekazoku
September 29th, 2013, 7:10am
Rating: N/A
This is the first time I read incest...honestly, incest is my fetish, especially older sister and younger brother thing

That's why this is my fav incest manga all the time. Sadly it's not completely scanlated.
The story is cliche, lot of smut, and sometimes the female lead is annoying and indescisive. But I though it was pretty normal considering that she was confused in her love affair.
When sibling get separated when child and met again after they both were adult, it's harder to see the other party as sibling.
the story is a ill bit dragged to me but still worth to read

Kasumi is annoying
by WShin
June 23rd, 2013, 6:26pm
Rating: N/A
I like stories like this, but unfortunately the protaganist's indeciveness and insecurity has been taken to an extreme in this story (to highlight the melodrama aspect, I guess) and it is irritating. 90% of the troubles they face is probably because she couldn't decide what she wanted, who she wanted, and what she was going to do about it. The story would have been a lot better with an emotionally strong and mentally strong female lead. Just because it's melodrama doesn't mean the female lead has to be weak.

And a lot of "No, I can't tell him!" had me screaming "YES YOU OBVIOUSLY CAN" at the page. She's usually not at fault, but she feels like it and it screws with the mood. Oh, and one last thing:
Kasumi should stop being an ass and cheating on Yoshiki with rapey Kazuki.

thats just sick unless im missing something please fill me in other wise im not reading this crap of a joke this is just to gross! please tell me are they real siblings or not i haven't even read 1 page yet if i get the answer that im looking for it'll help me make the choice to read or not to read!

even if i love the art of this Author and work but this story is just too much. i so wish they weren't real blood related siblings but i guess thats just not it.
Was this comment useful?  Yes