Login to add items to your list, keep track of your progress, and rate series!
Description
From Exiled Rebels Scans:
Toujou Aki lives with his younger step-brother, Saku who is a university student. Instead of going home to sleep though, Saku will stay out with as many women as possible, to the point of being a man-whore. Aki, on the other hand, has a deep hatred for women, enough to make him nauseous being around them. Aki’s one secret is that he would do anything for his brother. No matter what it is. However, everything can change in an instant during the silence of three minutes. 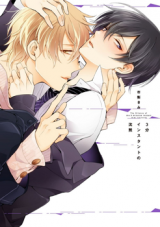 this was good i liked it
by iloveanime445
July 14th, 2019, 7:48am
Rating: N/A
this was a good manga, the sex scenes are pretty good and it's just a pretty good manga other then a few things but loved it

I Love It!
by fisukisuki
January 18th, 2019, 7:20am
Rating: 9.0  / 10.0
It's not Perfect, but it's GREAT! I LOVE Saku! I Love Saku who both Sweet and Scary. He's Possessive without being Possessive. No matter what people said, Saku's characteristic is Entertaining. He deserve to get angry, to did what he did, because it was mostly Aki's fault he did all that. Aki want Saku to Pretend to forget, he did. Aki want Saku to embrace him, Saku did it. Aki want them to stop, Saku DID IT!!! I don't Hate Aki AT ALL But GOSH all Saku did is for Aki! and Aki thought what he did is for Saku too! It was just Miscommunication and Misunderstanding and not being honest until Aki finally understand Saku's feeling and finally confess.But even after everything Saku still going to protect Aki, and damn if that's not make me love him even more.
Was this comment useful?  Yes

Naffs
by Tentacle
May 18th, 2017, 1:19pm
Rating: 6.0  / 10.0
I really love Ichinachi-sensei, but this was a really weak one for me. As always the art and sex is amazing, but the characters are just too stupid for this plot to work for me. I mean stupid as in "no I won't tell him" and ending up going around in circles although it's clear as a day. And also, the change in Saku's character was just too much. Sometimes he acted one way and other times another.
Was this comment useful?  Yes

imperfect eye-candy
by noelle777
May 13th, 2017, 11:56pm
Rating: 7.0  / 10.0
I like this artist. Her art is sweet as a candy, expressive and dramatic at the some time. Some facial expressions look like taken straight from thriller/horror story, really nice. I don't usually enjoy stepsiblings love stories (same with adoptive siblings; they put emphasis on incest while in fact there is no incest at all, much fuss about nothing) but since it's her, I let it pass. Story-telling skills needs to be polished yet, plot doesn't flow smoothly

Good enough I guess
by Dagorkitty
May 12th, 2017, 7:13pm
Rating: 6.0  / 10.0
I liked the concept of the manga and the characters, I like anguish when well executed, but I felt it focused too much on it. I wanted to see more about the characters background and what happened after the last chapter. I feel like the manga was overly centered on the climax and there wasn't much of anything else. OmNom says in a previous comment that the author used to do dj's before this manga, I guess that would explain why it feels like a stretched out oneshot.
Was this comment useful?  Yes

A very amateur attempt
by OmNom
May 12th, 2017, 11:44am
Rating: 1.0  / 10.0
Honestly speaking, I'm so disappointed right now. I was so looking forward to this author's debut following her days as a Shingeki no Kyojin doujinka, which I guess put her too much on a pedestal and raised too unreasonable amounts of expectation for her from me. This manga is frankly just bad. It's got terrible pacing, very sloppy writing and an almost embarrassing lack of finesse and skills in terms of artistic expressions for a manga artist (the excessive use of lines/toner to cast shadows on characters' faces to express every single emotion drives me up the wall). There's seriously nothing I enjoy about it.
Was this comment useful?  Yes