Login to add items to your list, keep track of your progress, and rate series!
Description
Raising Your Pet
Hidaka Chikara, 17, goes onto the tv show "Fight Money" and swindles 5 million yen out of Kunimi Tomokazu, who is president of Keinou Productions. Chikara actually gives the money to his friend for his sick sister. But, how will he repay his debt?

My Prince
Hayato's family volunteered to host a foreign exchange student, Edward Farring. A family emergency means Hayato is home alone and It's up to him to meet the guest at the airport and make him comfortable. However, it seems like the handsome Edward is not who he says he is. Who is this princely guy? 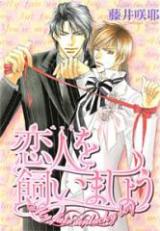 I disliked the way Chikara was forced into it all and ended up being fine with it.
by Zandra
July 13th, 2008, 2:14pm
Rating: N/A
I liked the art, and I loved Chikara's rebellious and stubborn attitude in the beginning, but I really disliked how he was "trained." Tomokazu was too cocky and it annoyed me when Chikara came begging to him. I don't like stuff like that, so I didn't even bother to read the second story. I just wish that Chikara had kept his edge.

I agree...
by astroasis
February 26th, 2008, 10:45am
Rating: 6.0  / 10.0
I definitely agree with everything said in the previous review. These two stories both felt stunted, as if they each could've benefited from being expanded and made the only story in this volume. Also, the lack of any real sexual energy in the "indentured pet" routine was really a let down. And I found the Prince story rather uninspired... and as the previous reviewer said, it's a shame that there were such lovely side characters made that got all but ignored!
Was this comment useful?  Yes

a lot of potential but suffers from serious flaws
by grumble_cakes
May 5th, 2007, 5:26am
Rating: 6.0  / 10.0
the first "main" story is actually only 3 chapters which really isn't enough to tell the story of Chikara's transformation/training. this means the storytelling is disjointed and omits a lot of information. The ending in particular seems rushed- there is a plot twist that should make a spirited guy like Chikara absolutely furious but instead he sort of accepts things as is and the story continues to the usual happy end. I don't get it.

Also, you would think a story about an indentured pet would be very sexual but there is very little sexual tension or sexual moments. The plot belongs in yaoi-land but take away about 2 pages and what you get is shounen ai, not yaoi. I just thought it was a little odd.

The second story also seems to suffer from that rushed feeling. One moment the couple meets and on the next page they already have serious feeling for each other, even though the readers never got to see how and why that happened. The second chapter introduces a bunch of people but you never hear from most of them again. Why waste ink drawing Eddie's younger twin brothers or older brother if you're not going to use them as characters later? It feels like a 1 volume story chopped and stuffed into 3 chapters.