Login to add items to your list, keep track of your progress, and rate series!
Description
From Deka Scanlation Group:

The scarlet dog detective invites us to a labyrinth full of exciting cases!! Inaba Hiroshi is a red-haired detective with a hair fetish, and together with his efficient young male assistants, they fight off the attacks of an ambitious Italian mafia (which is a goat though). This is a gag story of a detective who thwarts off the mafia's every design (and getting quite sick of it)!! 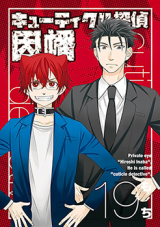 Hilarious but too long and repetitive which drags down the score
by Seregosa
November 15th, 2018, 5:29am
Rating: 6.5  / 10.0
It's a pretty funny manga with lots of jokes all the time, filled to the brim with sarcasm, stupidity, weirdness and whatever else. It's just absurd on many levels.

The first few volumes were great, undoubtedly I would've given it a 9/10 if it ended after just several volumes. The issue here is that it went on for too long. The author's jokes became dry and tepid. The author had the same style of comedy all the way through and pretty much the same gags were recycled over and over again in different situations, barely anything new happened whatsoever. Especially the last several volumes where you could feel the author losing more and more motivation/steam, barely anything creative or new was added. It sadly got to the point where, after the middle, I started to just speed-read everything because it became quite boring and I just wanted to get it over with and get some closure. You can only use the same joke materials so many times before it gets old, pure comedy manga written like this one shouldn't have so many volumes. It should've ended at around midpoint at the latest, but it went with more than double the amount of volumes of the ideal value.

Oh, and ending was unsatisfying in various ways, but far from the worst I've seen. I would've liked it to go differently. I especially couldn't stand the personality of inaba towards the end, he's too much of a goody-two-shoes for my taste. Passively taking beatings and gun wounds and not doing anything because he's a "guard dog of the law". Sigh. Seems that these police hounds/half werewolf half human hybrids didn't even get any human rights in the end, so stupid.

By the way, I recommend watching the anime instead. It was better, the voice acting and animations made this much more lively and funny. The first time I watched it, I couldn't stop laughing, though that was several years ago now(I'm sadly not as quick to laugh as I was back then).

Good one
by TuckingFypo
October 11th, 2009, 11:47pm
Rating: 10.0  / 10.0
The 1st chapter may be boring at first but on the 2nd to the latest chapters, it's funny and enjoying. Actually, it's HILARIOUS! I recommend reading it in its original Japanese version to further understand the inside jokes, sarcasm and stupid gags! A must-read! And it was announced on August 2012 that there will be an anime! Looking forward to it!