Status
in Country of Origin
84 Chapters + 16 Side Stories (Ongoing) 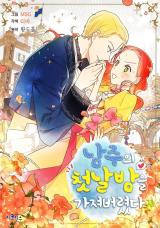 LOVE IT!
by inhaleblake
April 27th, 2022, 8:43am
Rating: N/A
such a great story with lovable characters
Was this comment useful?  Yes

eh
by gloriousmangalover
February 19th, 2022, 10:17am
Rating: 4.0  / 10.0
- dropped after chapter 60ish, skimmed a bit, first manga i read to kickstart my oi binge
- honestly it was really fun. very entertaining and lighthearted. reincarnated ripley (the fl) is cute and funny and so is her maid. her past was a weird and unexplored trauma dump though lmao and though my biggest criticism w oi is that there isn’t enough connection/mention w past lives in the reincarnation, this manhwa did it just kinda clumsily ?
- scene w the real ripley and the reincarnated one was adorable. also the real ripley is fucking hilarious
- i really liked the supposed to be heroine if the og story. this oi isn’t anything special don’t get me wrong but it was one of the first i’d read where the reincarnation actually befriends the heroine. i like well portrayed female friendships :>
- not a fan of the duke (ml). i kept reading in the hopes he gets better (barely). he’s still toxic and obsessive which is acknowledged by the fl but why don’t they work to change that? why does she just let it go omg. i don’t like it when he says shit like “you can’t leave” or “i’ll trap you” NOT to mention he took advantage of a clearly drunk girl? fucked up shit i’m saur
- plot kinda drags idk. it’s a money grab but i just kept noticing repetitive and episodic things. i’m p sure the translations ending soon though ? also why doesn’t fl employ her insider knowledge more !

overall: 4/10 it’s a lot of mindless entertainment, very addictive and easy to read. but god the mls insufferable and set me off “cold duke of the north” tropes forever

Didn't like it
by WhipNaeNae
July 4th, 2021, 2:46pm
Rating: 5.0  / 10.0
Maybe it gets better later, but this webtoon had a pretty terrible start. It might not be so bad if it's your very first shoujo isekai, but after reading a lot, you really notice the annoying cliches in this one. Cliches aren't even necessarily a bad thing, it's their execution that made this trash.
The male lead is obsessed with her after 1 night for some reason (there is nothing that could have happened in one day that'd justify falling that hard in love in one day, tf?), the female lead is obsessed with getting the story on track as always (why?? Who gives a shit??). It's just tiresome.
Was this comment useful?  Yes

Refreshment
by Cycymarv
May 10th, 2021, 9:25am
Rating: 10.0  / 10.0
After reading bunch of villainess isekai woth heavy politics, this is great to refresh your mind😉
Was this comment useful?  Yes

I mean, i laughed...
by Glaciz
March 11th, 2021, 6:58pm
Rating: 5.5  / 10.0
I started reading this a long, long time ago and marathoned the last 20 chapters when I saw that the first season was over, and my first impression was the same as my last one. A light and funny story that shouldn't be taken seriously. And because I didn't take it seriously, I was able to really enjoy the journey, plus the art is really charming and keeps me chained XD.

I like the Duke, even though his actions in relation to FL were and are sometimes still toxic and problematic, but, as I was reading this thinking as a comedy, it didn't affect me much and I laughed a lot ... The story doesn't try to be fantastic or new, it is in truth, very cliché, almost like a rom-com.

Still, I think they dragged on the drama. And after the first 20 chapters, FL's countless plans to get rid of ML can become repetitive and a little tiring.

Ripley can also be a little annoying.
And look..I'm a person who rarely gets irritated with characters in general, but that can vary from person to person.

At the end of the day, it's just an average story with a cute art style and funny moments ... there are better things to read, like a comedy and like a romance / isekai story, but, you may like it? I can say that it was a good read to spend time. The score is 5 but it is only because the story is nothing special.

Well, I got won over at the end.

Duke is a funny and sweet guy when it really matters lol.
Was this comment useful?  Yes

This One is a Real Charmer
by BiggusDickus2
August 19th, 2020, 7:49pm
Rating: 1.0  / 10.0
This story attempts to have the chemistry and humor as My next life as a villainess etc, and the MC is comparable to Caterina; both are a bit clumsy considering their social position, and of course “unique.”
However, the humor in Caterina’s humorous situation is replaced with the Duke aggressively pursuing the MC (when the mc is reluctant) and using his power/status to lovingly persuade the MC that she doesn’t have a choice; moreover, the Duke falls for the MC on the heartfelt basis that she was his first. It’s splendid that he acts like male virginity is treated as a holy treasure in this isekai world. I must commend the Duke for not being besotted with the MC’s beguiling personality and intrinsic values.

The MC takes it very well, trying her best to reconcile herself after realizing her dreams of a hedonistic lifestyle was replaced with drama. The theme of this? In the end, it’s all ok as long as you’re rich, powerful, and handsome like the Duke. Your love WILL fancy you back...eventually.