Login to add items to your list, keep track of your progress, and rate series!
Description
From Forever More:

After his parents were killed in an accident, Yayoi assumed their hundred-million yen debt. He was being pursued by collectors when a mysterious man, Kazu, appeared before him and offered to take on the debt for him if he would become Kazu's... 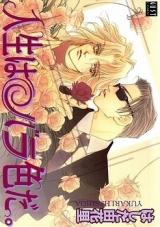 baka comedy, not that bad
by kidoraku
December 21st, 2015, 3:07pm
Rating: 6.5  / 10.0
It's a stupid comedy, quite long and with many characters. It's filled with a silly sense of humour, but it's not annoying also the art isn't half bad. As for me it was funny. It won't make you drop off of the chair but you'll constantly smile while reading.
It's good to read sth like that once in a while to relax and rest a bit from serious stuff, blood, gore and dark ambience if you know what I mean. Although I didn't like the side story, I kind of liked the main, I don't feel like I wasted my time. It's up to you if you want to read this sort of thing.
Was this comment useful?  Yes

Conflicted
by Cassandra08
July 29th, 2013, 6:59pm
Rating: N/A
I enjoyed the main story, not the best, not the best art, plot, etc, but a decent read nonetheless and relatively enjoyable. However, I intensely disliked the second to last side story, which seemed really wrong to me (although, like other reviewers I normally 'like' rape and shota), and that kinda ruined it. So I'm not going to rate this, as I'm kind of conflicted about my final opinion...
Was this comment useful?  Yes

Quite boring.
by Kinky-Chan
December 30th, 2012, 7:53pm
Rating: 5.0  / 10.0
No offence, but the story is really boring. Not to mention that some parts are very rushy, and I don't even know what on earth is going on. I've got no idea what the characters are trying to convey and all I know is, that Yayoi is some stubborn freak that gets freak out with "fags" and yet he can still give Kazu some kisses just because of the cash. Ugh. Come on. I think at least Toshiya shows more affection and expression although I don't like the old man part. (I'm totally not a fan of uke falling for old man. It's gross and just plain ugly. Seriously)

However, I do find Kazu a funny lad. He always say those embarrassing stuff with a straight face. I kinda like that! And the art...well, I'll just say that I'm not a fan of pointy faced guys.
Was this comment useful?  Yes

good main story, totally puke-able side story
by whitespade
April 10th, 2012, 3:27am
Rating: 8.0  / 10.0
i really like the main story, it is funny and have a good flow. the love at the end does feel a bit abrupt, but it dont come out of nowhere. the conclusion is good. i actually like the sketchy art, the guys look alive and their chibi form is especially funny. i hate the cool mysterious type of guys they always such boring characters but the art make it work for kazu, in his chibi form he is the funniest of them all.

however the last chapter with the side story throw me off. it is dark, gloomy, and creepily disgusting. now, i have to admit rape and shotacon is my kink. however this chapter just throw the balance of the main story out of whack. it especially make me hate kazu when i like him perfectly in the main story! sure this chapter give more depth and dimension to their personality but knowing their ugly side does not make me enjoy the main story at all. in addition i always feel slimy with love declaration from rape victims. they always sound forced from the mangaka.

my rating will be from the main story. it is recommended for people that like carefree comedy, but dont expect heavy smut, even until the end.
Was this comment useful?  Yes

Funny and unusual
by raketsuban
February 22nd, 2012, 1:45am
Rating: N/A
Usually I don’t like manga where one of the protagonists is initially straight and either winds up in a “gay for you” scenario, or is kind of forced into the relationship against their will (Arashi no Ato, I’m looking at you). But Jinsei wa Barairo da somehow pulls it off, probably because by the end of the volume Yayoi is as bratty and unwilling to give Kazu a break as he was in the beginning — there’s an aborted sex scene, but otherwise the action between Yayoi and Kazu is limited to a whole lot of (largely unromantic) french kissing. But what the manga lacks in the traditional BL romance/sex department, it makes up for in the comedic antics of its characters. Yayoi and Kazu’s relationship develops more in the second volume, though I have to say I enjoyed the first volume more if only because the second contains a side story about Kazu’s secretary that involves a disturbing portrayal of abuse that’s never quite condemned.

nearly over averange though nice humour until last chapter
by ceren
November 24th, 2011, 12:01pm
Rating: N/A
I agree with pleochroic. the artwork was just above avarage however story had a nice humour. although the story was developed slowly, it came to conclusion very hastly.

I tottally missed the podephile category and unfortunately read it.even though i read before similar pieces involving sexual abuse and such, i have no recollection of any with such forced feelings. I simply like to remind mangakas sometimes that abused one does not have to love the abuser. in fact, in reality it would be called pathologic.also i was not convienced at all that fukushima sincerly had nice feelings for his abuser. it was written but there was no sensation of it.
Was this comment useful?  Yes

Pretty good
by KittyTeea
August 20th, 2011, 3:11pm
Rating: 9.0  / 10.0
From my point of view the art isn't half bad, maybe it's also because this is not my first manga by this manga-ka, but even from the first time I didn't mind it. Apart from this I liked the story, which was pretty funny. About the characters, I have to say that the uke was pretty annoying, he didn't have many qualities, though I couldn't make myself to hate him since he was so silly. The seme, except for his poker-face, turned out to be a really nice guy. Well I have to admit that I liked the pace because it wasn't rushed, since it wasn't natural for a straight guy to fall immediatly for another guy and there were even women in this one, wow.
It actually turned out to be a fairly entertaining piece, which is worth a try.
Was this comment useful?  Yes

not my thing
by pleochroic
April 6th, 2011, 7:51am
Rating: 5.0  / 10.0
and that's primarily because of the art, which, i am sorry to say, i find butt-ugly. the story itself wasn't as bad, even though i couldn't at all get what kazu saw in yayoi, and i didn't care whether they ever got together kazu, on the other hand, was quite a nice seme, and the story was mildly humourous. i don't want my time back, but i am unlikely to read it again; the art makes my eyes hurt.

the side story at the end is creepy and doesn't fit with the mood of the main story. it also made me like kazu a little less.
Was this comment useful?  Yes

Well,
by boycrazy92393
December 13th, 2009, 12:07am
Rating: N/A
I liked it ^-^ it was cute, funny, and sweet. And the seme was really hot, so even though there wasn't much smex, it was nice on the eyes ;D Also, even though it's old, somehow her drawings had a "timeless" feel, so I didn't know it was actually old until after I had read it. Weird. Well anyways, nothing too deep here, just an enjoyable, comical read

Brilliant
by daniyagami
October 20th, 2009, 6:14pm
Rating: 10.0  / 10.0
I simply loved the story, it's hysterical and plays with all clichés from yaoi and shoujo. You can't take it serious or you will miss the point of this manga. Relax and enjoy and you will probably find yourself laughing loud.