Login to add items to your list, keep track of your progress, and rate series!
Description
Hana has made every effort to avoid an inevitable family curse... of turning into a dog after her first kiss. Worst of all, the only way for her to break the curse is to get a second kiss. How will that work when Hana's first kiss is with a guy who is deathly afraid of dogs?! 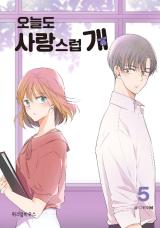 
Category Recommendations
The Heart of Red Cloak
A Chance to Cherish
Yi zhi chong hun: Shenmi laogong re bude
County Princess Will Not Marry Four Times
The Villainess Is Retiring

“But”
by ekushay
April 16th, 2021, 8:52pm
Rating: 7.0  / 10.0
I enjoyed it... But there’s a “but”. There was something that bothered me about the story: it was way too simple. Based on the storyline, there is so much potential for exciting and interesting events. But. The storyline was made out to be “easy” to digest and that wasn’t to my liking.

For sure I liked the art and overall narrative. It’s just that I’d hoped for more. I definitely agree with the comments from AstralRabbit and Shellshock, but as you see from the ratings distribution, there are more people who think of this as a 10 than a 6-7, so there’s a high chance you’ll love this story too.

If I had to have a final say on this webtoon, it’s that it was good. It was cute. But... That’s all.

A very much lack of ompf
by Shellshock
October 22nd, 2020, 5:48am
Rating: 6.0  / 10.0
The series is about the FMC who has been cursed due to her ancestor's crime. The curse being that if she kisses a man she will turn into a dog at midnight. The problem lies that the heroine ends up kissing a man who not are only uncomfortable around each other, but who also hates dogs. Now you have two people with various issues in a way connected.

I enjoyed Bogum. I liked his so much i even remembered his name. He was definitely the best character in the series. I loved the contrast in his personalities. It was obvious something was up but i really think author nailed the *reveal* for the character. It was dramatic and interesting.

The rest of characters i mean.... they were ok. As expected the FMC and MMC stood out (albeit were still out shined by Bogum). They weren't spectacular but i enjoyed their interactions. They had very romantic chemistry and i liked pretty much all the cute parts about it. Their romance was nice to see blossom.

The rest of the characters were fine. They didn't do much anyway. I didn't really like any of the characters backstory either. Like the main male lead back story felt incredibly sappy and not really well done. Most pity party stories don't really work and its not like this did anything all that different.

I guess what im trying to say is that i liked some parts of it. I really liked Bogum and the rest were medicore. None of it was really all that bad or even kinda bad. But it wasn't anything special either. I also wished the whole turning to dog thing was done better. The entire curse was poorly done. Like it didn't need to be there. I understand its meant to be this opposites attract type romance. But honestly it just didn't work. Granted i did still enjoy their romantic interactions but personally lovely complex just did it better. I also didn't like how everything was resolved in the end. Too annoying.

TLDR: Its fine. Its got some nice moments though. 6/10
Was this comment useful?  Yes

Funny, cute, cheesy
by smallspark
May 16th, 2020, 7:59pm
Rating: 7.7  / 10.0
Funny, cute, and cheesy. The art style is lovely and the characters are likable. However, some parts are pretty predictable and forgettable. But it's a light easy read so it was overall enjoyable.
Was this comment useful?  Yes

Woof
by AstralRabbit
April 7th, 2020, 5:53pm
Rating: 6.0  / 10.0
"A good day to be a dog" is fundamentally a tried and true formula for romance stories, but infused with enough novelty to pique interest and win affection. It certainly crams quite a number of story arcs into its run. It's a shame none of them end up being truly exemplary.

So while my good will was quite high for this story in it's formative stage, I did find myself depleted by the end. I wanted to like it more than I actually did. The romance didn't pop enough when it got off the ground. When it was inevitably threatened in a rather half-hearted way, the logical side of my brain won out. I could see, and agree with the putative culling of their romance. I want to be taken on that emotional roller-coaster with the characters and fall in love with them, not be able to deliberate the cost/benefit analysis of them remaining together...

SO AMAZING OMG AOIDSNSFUIEA
by webtoonmaniac
November 26th, 2018, 5:10pm
Rating: 10.0  / 10.0
I LOVE THIS WEBTOON SO MUCH THE SUMMARY DOESN'T DO THIS WEBTOON JUSTICE!! when i first began reading it, i was like "this looks so boring" but after 7 episodes, i was HOOKED! the plot is very interesting, the art is amazing, and the characters are JUST SO ADORKABLE ACKKKKKkkk!!! I STRONGLY SUGGEST READING THIS AND I ASSURE YOU, IT WILL BE THE BEST THING YOU'VE EVER DONE !!!!!!!!!!!11 uwu
Was this comment useful?  Yes