And so begins the "Classics Club Series". Less... 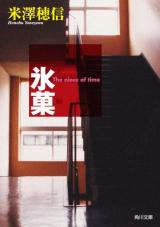 Note: You must be logged in to update information on this page.
Forum Posts Click to view the forum
Hyouka Manga Comes to an End with 12th Volume
over 3 years ago

Don't Miss the Point
by cecropiamoth
July 22nd, 2015, 8:19pm
Rating: 10.0  / 10.0
I'm basing this review on the anime, but I'm very eager to read the light novel when I have time, and enough chapters have built up sufficiently to give a full reading experience.

This is a story about personal growth disguised as a mystery story. Therefore don't expect a laser-like focus on the mysteries, even though the first, longest and greatest mystery is truly a very mysterious one. While it unrolls, we get the opportunity to meet an ensemble of very interesting, complex people, whose characters are built up deliberately before us. Most striking of all is the the MC, a high school boy who has one of the several things it takes to be a success in many activities—he's very, VERY smart. What he lacks is the all-important factor of motivation, and, not surprisingly, he has a very well articulated reason for not having it.

After the big first mystery is solved, what takes over as the center of interest is the characters, who by this time have developed enough to be really interesting and very likable. Above all, we begin to see the MC starting to move off of his stance of passivity. The reason why he starts to change is not surprising (It's a girl), but the possible romance had not become well developed when the anime ended. I'm looking forward eagerly to reading the story of its development in this novel. It's not going to be easy. The two are very different in many ways. I can hardly wait to see if it works out.
Was this comment useful?  Yes

Good
by dezin19
August 29th, 2013, 6:33pm
Rating: N/A
I've watched the anime only so I'm basing this on that. I like the characters, especially the main character because I can empathize with his attitude. I'm tired of the energetic, go-get-'em protagonists that are in almost every single manga/anime. To a calm person like me it comes across as annoying half (if not, most) of the time. So that part is refreshing. Another thing I liked is that this is a slice-of-life, in which you get to see the characters acting like normal people. They have real personalities and little habits that make it all seem real and immerse you into the moment and make you care about them.
Some things I don't particularly care for are: 1) The fact that there is no real plot. This might come with the slice-of-life territory, but I would have like to see some sort of 'main mystery' or a recurring antagonist, whether that be a person, a personal struggle in the protagonist or with another character, or something else altogether to act as a driving force and add a bit of conflict. (Oreki does have a bit of an inner dilema, but it's hardly a driving force). Because of this, after a while I found myself growing a bit bored. If this series was an on-going one (it doesn't seem to be the case, if I understand correctly) then the slow pacing would be understandable. 2) The underlying romance between Oreki and Chitanda. Maybe this is a bit of the old mystery/detective fiction having an influence on me, but giving the 'detective' in mystery/detective fiction a romantic interest is usually a big NO. Dems da rules, and for a reason; it detracts from the plot. But, again, there is no real over-lying plot so perhaps the author felt that it wouldn't be a problem. Still, I personally find it unnecessary and feel that it would have been a better show/book if they were strictly friends. Of course, if you look forward to romance in any situation, then this will probably add to your reading/watching experience.
All in all, it's a good anime/manga/book and worth giving a try. The anime is really well done and enjoyable, so if you're not sure if reading the books is for you you can always watch an episode or two of the anime to get a taste for it.

Nice, but not enough
by foobar
January 2nd, 2013, 9:31am
Rating: N/A
Nice. At least it is mysteries and not supernatural stuff.
But, the mysteries, or the solutions sometimes have big gaping holes.
And, I can't bring myself to care about the protagonist.
Was this comment useful?  Yes

So and So
by nowhereman
October 4th, 2012, 7:40am
Rating: 8.0  / 10.0
I watched the anime, read the novel and came to the conclusion that the main character is pretty awesome and the curios part is well done and better done in the anime very visual and good, but back to the novel... It's nice and energy saving isnt all in life and he gets it. xD
Was this comment useful?  Yes

Hyouka is basically a story in which the protagonist solves riddles.

It's kind of refreshing to see that not every good mystery manga(or novel) revolves around a detective and how he solves murder cases.

Though in book one some of these smaller cases might give a wtf? (what the fuck?) feeling at the beginning becouse of their insignificance, they all build up to one case which is brilliantly solved at the end of book one.

In contrast to mangas like Conan the plot actually progresses, and unlike Q.M.C. it has a more realistic feeling to it, which is why I see this story overall better than these two.
In the Moment it is only hinted, but people seem to evolve as well, a nice bonus.

Though I'm not absolutely sure at this point, one can already deduce that the cases are getting bigger/harder, though I think they will (luckily) never evolve in real murder cases.
While in book one the club solidifys, in book two the "fame" starts spreading.

I can recommend this book for people who like to solve puzzles before the protagonis does. It is possible, but sometimes very hard. (Talking about the conclusion of book one)
It is not recommended for people who don't use their brains, only like murder mysteries or have the expectations of great archievements. Up to now, this all is possibill in reality and not exagerated.
Was this comment useful?  Yes

Based on the summary, I thought maybe this could be an interesting series; unfortunately, the characters and story are bland and boring. The story might get better later on, but I don't care enough to find out.

Also, the level of "mystery" for this series is:
Spoiler (mouse over to view)
Q. Why was I locked in a room?
A. The Janitor was finished doing shit on that level.
Was this comment useful?  Yes