Login to add items to your list, keep track of your progress, and rate series!
Description
From Nakama:

A change in the stakeout team throws Onoe, reporter for a weekly magazine, together with his contemporary, Kaburagi, a photographer. Onoe secretly considers Kaburagi his rival, and Kaburagi's haphazard way of doing things goes against Onoe's strong sense of ethics--there's nothing but conflict between them.

But, in joint pursuit of a scandal, the two of them begin to care about each other...? 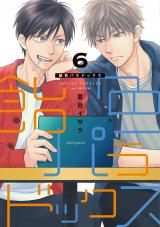 Note: You must be logged in to update information on this page.
Forum Posts Click to view the forum
Ameiro Paradox?
over 8 years ago

A Series That You'll Read Over and Over Again
by Rukia_123
January 29th, 2015, 8:16am
Rating: 10.0  / 10.0
This is one of the best yaoi manga I've ever read. Cute, light, and sexy. I just loved how things turned out in their relationship like how Onoe never showed his love with words so far (well, it's because he's tsundere though) but by being himself he made Kaburagi fall hard for him. Loved that Natsume-sensei made Onoe a blushing-easily character which is adorable. And Kaburagi is so sweet and pervented at the same time

Overall, it's a nice manga. Totally recommended.
Was this comment useful?  Yes

Sweet
by Airendy
August 17th, 2014, 5:06pm
Rating: 9.0  / 10.0
I loved this manga, the protagonists and the art. I liked the way the uke, him being tsundere and hatest first the seme and after falling in love with him. Already the seme i liked and didn't like it at the same time, he was very ciumente and did not want to leave the uke to do his job ... It was a great manga.
Was this comment useful?  Yes

I loved it
by Gattaca88
December 1st, 2013, 1:46pm
Rating: 10.0  / 10.0
Really cute relationship between the two main characters and I highly disagree with the person below me....there was nothing "shallow" about their relationship. They fell for each other after spending hours and hours of time together and started developing feelings after getting to really know each other.....so how the heck does that make it "shallow".

The progress is believable and actually really good. The art is perfect. I highly recommend this yaoi manga.

....
by MirayAllen
September 27th, 2013, 3:52pm
Rating: 7.0  / 10.0
I'm not usually in for Comedy BL because, quite frankly, I find the "humour" really not that funny or original or natural to being with. With this one though, I totally open an exception. For the laughs and the art style I totally recommend it. As far as plot goes, however, it's pretty predictable, basically from page one, but one should really ask herself if there's anything new and fresh (at all) concerning the Tsundere-Uke/Cool-Seme variety. Guess not, ahah.

Even though Onoe and Kabu had clear-cut personalities and could easily pull me in, I found their relationship rather shallow to be honest. Sure they had their heart-warming moments, mostly because I could more or less relate to them (especially to Onoe) in one way or other even more than once, but that alone - to me - doesn't make the relationship believable as a whole. Plus, I can't ignore the fact Kabu was always the one to take the initiative when it came to sex, and even worse: he always ignored Onoe's complains.

I really don't know which kind of sake these artists have been drinking but seriously: someone please remind them that "Stop, stop!" and "slow down" should equal "I don't want to have sex right now" and not "please give it to me harder!"

Overall it was still a great journey, and quite decent a reading too. The art was just awesome though. I'll be checking more of this author's works because of that alone. Ahahah.

:D
by Peppermint
January 10th, 2013, 11:11am
Rating: 9.0  / 10.0
It's very cute and definitely worth a read! The art is absolutely great. Typical tsundere uke x seme stuff, but the reporter profession helps ground their relationship and give them a plot. There's also a chapter from the seme POV, which is something worth looking at. The manga's somewhat lacking though, as the tsundere's characterization doesn't have as many layers. He stops insisting on moral integrity and starts obsessing about denying his relationship. Eh, the manga isn't fully scanlated yet, so it could improve. It's a minor issue that makes this manga just shy of being special.
Was this comment useful?  Yes

The usual high standard!
by Namiya
January 5th, 2013, 4:57am
Rating: 10.0  / 10.0
It's been a long time since I read a manga with a couple such as this and I love it!
They are so great together, bickering, complaining and insulting each other in the funniest ways but they will just go on loving each other!
I can't wait for volume two and am already curious to see whether or not Onoe can finally accept his own feelings and show them a bit more.
Either way, as expected from Nastume Isaku sensei, a great romantic comedy!
Was this comment useful?  Yes

FREAKING ADORABLE
by gwkimmy
October 2nd, 2012, 2:04pm
Rating: N/A
normally i don't care for tsundere uke's at all. i think these two get a pass since they're both tsundere for each other and not in the annoying abusive way. onoe is BEYOND CUTE. his conviction and sense of justice combined with kabu's questionable ethics make for excellent chemistry. also i love how we get kabu's POV sometimes, he's also flipping adorable. it's rare that you get more than one pov in a manga like this, otherwise kabu might come off as just a cold jerk lol.

CANT WAIT FOR MORE
Was this comment useful?  Yes

One of my favorites!
by moeanao
September 29th, 2012, 6:23pm
Rating: N/A
I really loved this manga, before I knew it became one of my favorites. Actually, I don't really know why.
Anyway, the art is really good, Kaburagi is really hot, I must say. And Onoe is cute. They're both really good-looking.
The plot is not the best I've seen, but it's still good. The pace isn't to fast, like many other yaoi mangas. I usually prefer them to get together in like the third chapter. That's why I don't like one shots ^-^
Oh well, overall, a really good manga. Totally recommended! :]
Was this comment useful?  Yes

Amber Paradox
by Trix_Michiyo
August 19th, 2012, 3:31pm
Rating: 10.0  / 10.0
I'm quite enjoying the manga. I wouldn't usually go for the type of couple that bickers and fights a lot. But these two really make a great pair. They're more endearing because of their personality traits and the way they behave around each other.
Spoiler (mouse over to view)
Onoe is the type to blush easily and wear his feelings on his sleeve, throwing a temper tantrum if being teased or not getting his way while Kaburagi is the silent type, cool and composed, who usually remains calm in stressful situations but who is undone by Onoe.

The details of their profession took a while to understand and put into context but other than that, I've enjoyed reading the progress the characters made to be together.
Was this comment useful?  Yes

Sappy, but cute. Nothing new, but I'll still keep track of how this story progresses.
Was this comment useful?  Yes