Login to add items to your list, keep track of your progress, and rate series!
Description
When playing a virtual reality game called Cang Lan, Xiao Wan gets pushed off a cliff. She ends up in another game world. What will happen to Xiao Wan?
Links 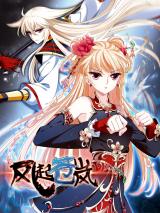 Entertaining
by DarthSiha
January 31st, 2021, 12:47am
Rating: 6.0  / 10.0
There are Cultivation-Isekai-Shoujo's like there is sand on a beach, and this one falls into a lot of the same cliché
-holes as most of them do: A Mary-Sue(ish) Protagonist that every male character has at least some degree of feelings for, repetitive arcs, a generic art style, "this isn't even my final form"-battles, internal monologue/back-ground character dialogue exposition to explain away poor world-building but it's been 200+ chapters and I am still hooked.

It plays into it's strengths like a true pro: Due to its reliance on the genre tropes, diversions from it come as an actual surprise. There is an abundance of characters that drop in and out of the main focus, making it fun to guess who will be making a comeback next. I really like the protagonist - who is a little too cheeky to count as a full-fledged Mary-Sue. Lastly, the ML is simp-worthy and d.a.y.u.m did I not see him being the ML coming despite the story setting him up splendidly.
Was this comment useful?  Yes

What a twist!.. Seriously WHAT A TWIST?!
by weltall2
January 7th, 2021, 11:21am
Rating: N/A
I agree with ChaoticOrder. The twist here is one of those that a lot of point do not make sense. It is not even the betrayal that happens at that point but so many other negative incidents too. I honestly can't bring myself to dislike the story, but I was left dumbfound when that happened. It sort of reminded me of the Tale RP game series, where halfway through the story a huge twist always happens that makes you question what just happened and everything came upside down or reset to zero. Well, in this case, rather than zero, it is more like it was towards the negatives.

Quite an enjoyable and easy to read manhwa, which I am glad I decided to at least give a try.. but again.. what the "FrequentlyAskedQuestions" did just happen?

Spoiler (mouse over to view)
The school arc with betrayal was sh1t cause Fluffy and Luobo's death.. :cc

BUT NO WORRIES! SHE WILL PREVAIL! Fall down 6 times, get up the 7th time. She will stay strong!

Spoiler (mouse over to view)
Demon land arc is great, she gets more strong and finds a brick and then Yan Moge
Was this comment useful?  Yes

It was ok.
by ChaoticOrder
October 21st, 2019, 5:24pm
Rating: 5.5  / 10.0
This series started ok. The plot was shallow but continuing nicely. Then shit hits the fan. There is the most BS sudden betrayal that I have ever read.
Spoiler (mouse over to view)
Everything was going ok, then the school training mission begins. The writing quality takes a sharp nosedive, and a bad murder mystery plot gets added in. There's literally an entire chapter dedicated to a talking pagoda. It turns out the person that betrayed our MC is Haidai the ghost spirit lady and Sangrang. It's the most jarring and out of nowhere reveal and they give the most BS explanation for why and how. In like 2 chapters the MC loses EVERYTHING. Her teacher is dead, her all her powers are gone, her friends are all gone or crippled, and like the first 90+ chapters (200+ chapters if you are reading it on another website that isn't the translators) may as well have never existed. It is literally a hard reset back to square negative 1.
.
After that, the very boring and bad Training arc begins. I almost dropped this series because of it. The series is picking back up in quality again with the demon world arc, but I am now very hesitant to recommend it to anyone.

Also, the author forgets the fact that the MC is literally the ruler of an entire city. Like when stuff happens and she is in trouble I often think "Shouldn't she just get her city to help her?" but no. It's a big plot device just thrown away and never brought up again.

Decent => Somewhat good
by PZcolo
January 2nd, 2019, 12:06pm
Rating: 6.0  / 10.0
A pretty cliché isekai manhua so can only recommend it to those who like that setting. It's your classic MC gets transported into a game, she's has access to all the gamelike features so it's pretty much a cheat, people bully her, she shuts everybody's mouth, several bishounen appear and so on and so on. It all goes smoothly till it doesn't so this is where it might get interesting.
So story pretty shallow so far, art-style is kinda childish and chars and dialogues have a very... teenager feeling about them (not particularly good imo).

Edit: It keeps getting better and then worse and then better again, but overall the good over-weights the bad imo, it's a fun read, a good MC for the most part and one that has to struggle through some things, there are just too many MCs that have everything go their way in manhua, this is a nice change.