Login to add items to your list, keep track of your progress, and rate series!
Description
Itsuki is the number one host at the club 'The Rose Garden'. Somehow, he has fallen in love with Ryou, the shy, innocent newcomer. Itsuki is unsure how to confess his feelings, but then, for the club's 5th anniversary, he is asked to wear a very special costume... Will Itsuki's beauty catch Ryou's eye? 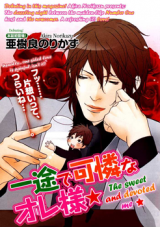 It’s so so
by WhiteIsBlack
October 22nd, 2019, 7:01pm
Rating: 6.0  / 10.0
This is my least favorite of Akira-san’s manga, but that doesn’t mean I dislike or hate it. I love reading her mangas, but this one lacks conflicts and arguments between the main characters.
Was this comment useful?  Yes

Just Right! I'm constantly laughing
by ngerd
April 23rd, 2016, 9:29pm
Rating: N/A
Most of the other comments mention a lack of plot and length but somehow, I think that's a strength for this particular story. I'm not a fan of rushed stories that jump from the confession to the sex scene faster than you can say 'enema', but this story captures the wackiness and whimsy that's reminiscent of yaoi classics. After all, the very ESSENCE of yaoi is "No peak, no fall, no meaning".

What's different in this yaoi is that rather than a lengthy build that climaxes with over the top sex scenes, this oneshot is the antithesis of that concept and it's rather refreshing. It's not supposed to be realistic, it's not suppose to be though-provoking, it's just gratuitous romance and I love it!!
Was this comment useful?  Yes

Not so great.
by Namiya
December 27th, 2012, 9:52am
Rating: 6.0  / 10.0
Any fans of Norikazu Akira's should definitely read this but other than that it's not a must read at all.
This is a typical victim of the oneshot type of mangas... having to put enough story and events into just a few pages while giving it a decent start and an end.
I won't blame Norikazu-sensei or anything, the biggest part of oneshots out there lack story or end up having poor story flow or rushed endings. What do you expect to get from only 10-30 pages?
You can't expect detailed characters, character growth and incredible stories in oneshots!
If you can accept that, or you can even enjoy oneshots over regular mangas, then go for it!
The art is typical for sensei, very beautiful but manly guys, crossdressing, cute faces....
Was this comment useful?  Yes

Short, but Sweet
by astroasis
December 24th, 2010, 12:51am
Rating: 8.0  / 10.0
This one-shot is VERY short, but it's also a sweet little read. What it lacks in length and plot depth, it makes up for in pretty art and cute characters. I did notice the same thing the other reviewers noticed - a jump at the end that almost makes it seem like part of the story is missing. However, most of what seemed to be "missing" would've been gratuitous sex, so I don't mind its exclusion (the sex scenes are my least favorite part in yaoi - I know, it's weird). It would've been nice to see more of them confessing their feelings to each other, but I just sort of assumed it was meant to be implied that they didn't waste much time on that. ^_^;;
Was this comment useful?  Yes

Shiny Art Falls to Poor Story Pacing
by MightyMaeve
October 20th, 2009, 11:35pm
Rating: 6.0  / 10.0
The story doesn't hold together well, not because it was short -some mangas of lesser pages have knocked me flat on my back- but because it is so involved at the beginning and then sudden explodes to the ending and misses the middle...>_<

The art was beautiful and the odd alignment of a top in drag was an interesting angle to explore artistically, but the story just made me covet the time I spent on the art.
Was this comment useful?  Yes

The art is stellar, the story? Not so much.
Was this comment useful?  Yes