Login to add items to your list, keep track of your progress, and rate series!
Description
It's about a guy named Yuuji, who loves to play rugby. One day he just up and dies, in the middle of a rugby match. His spirit is unable to rest, because his team has never gotten a try. So what does he do? Take over someone else's body to accomplish this goal. But... the body turns out to be a girl's! 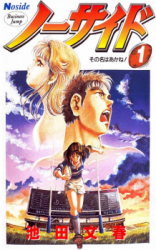 it's true
by Banarok
February 21st, 2012, 5:13pm
Rating: N/A
what other posters said below me is very true indeed. its old fashioned, it doesen't have too much of focus and have a bit of too high pacing.

BUT it does truely have its moments and it's a enjoyable but very quick read, it's by no means a masterwork and the rugby rules are seriously out dated.

To be honest at most part it does not matter, it seldom does the special effects (but it happens mind you) like Eye shield and other sport mangas and keep it to what it is, footwork toughness and strengh something that i like, also the high pacing makes it rarely feel tedious like many sport mangas sadly become.

It will most likely not leave much a impression, but atleast i enjoy it while i'm reading it.
Was this comment useful?  Yes

bang!
by Romashk
July 13th, 2011, 6:22am
Rating: 6.0  / 10.0
Maybe I read too much manga, but this one doesn't interest me. I feel like the whole thing is divided into equal portions. There is possession and it's troubles. The losing, but very spirited, sport club. And there is fan service. The whole thing is all over the place and nothing really stands out.
But most boring of all are the characters. They are introduced quickly, some change happens, but then that's it- the author moves on.
Maybe the length is what caused this manga to be so fast paced, but that's not really an excuse, to try and cram everything in.
It's not a bad manga there's a sport, likable main characters, bit of romance, but it's too shallow and not very eye catching to really grab your interest.
Was this comment useful?  Yes

old fashioned, but like it
by ahch84
January 1st, 2009, 10:33am
Rating: N/A
its kind of old fashioned manga. the arts looks good though. i kinda like it, except for the ecchi parts. i rarely found any rugby manga, so this is a must read for me.
Was this comment useful?  Yes

Outdated
by kasekimizu
February 18th, 2007, 9:43pm
Rating: 6.0  / 10.0
It has some funny moments and interesting plot points but overall there are too many stereotypes in it. It feels old fashioned.
Was this comment useful?  Yes

Good, but not great
by Sosseres
February 15th, 2007, 1:44pm
Rating: 7.0  / 10.0
This series has a few interesting characters and a nicely laid foundation. The sports backdrop with rugby is also something it has going for it. Why it then isn't great is a mystery to me, nice I am not trying to write a review since I would have to know that then.