Login to add items to your list, keep track of your progress, and rate series!
Description
From Storm in Heaven:

Tamiya, a student whose honesty tends to be so blunt that it gets him in trouble, has fallen in love with Shirasaka, a teacher from his school. He's an excellent teacher, very caring and popular among students, but because of his dark past, there seems no hope for Tamiya to win over his heart. In the past, Shirasaka had a relationship with Iogi, his senior on the track team, and they were both in an accident which was Shirasaka's fault. Iogi became seriously injured and was forced to give up his athletic dreams. Since then Iogi has used Shirasaka's guilt to keep him clo... More...
From Storm in Heaven:

Tamiya, a student whose honesty tends to be so blunt that it gets him in trouble, has fallen in love with Shirasaka, a teacher from his school. He's an excellent teacher, very caring and popular among students, but because of his dark past, there seems no hope for Tamiya to win over his heart. In the past, Shirasaka had a relationship with Iogi, his senior on the track team, and they were both in an accident which was Shirasaka's fault. Iogi became seriously injured and was forced to give up his athletic dreams. Since then Iogi has used Shirasaka's guilt to keep him close. Is there any chance for Shirasaka and Tamiya to be together? Less... 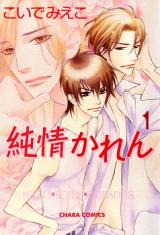 Hate it!
by aiish
June 3rd, 2016, 6:11am
Rating: 4.0  / 10.0
I was into it for a bit until the uke totally annoyed the heck outta me and I just didn't believe in the love between him and his student and godddd I was totally fed up with the yoyo type relationship that I just skipped to the end. Honestly, even though unhealthy, the relationship between him and his Senpai was more interesting and real, but ughhh sensei just annoyed me! 4/10 for trying, bleh! I agree with mangafan321.

The plot might be too dramatic, but the angst works out.
by kute_changmin
April 23rd, 2014, 2:03pm
Rating: 9.0  / 10.0
There is nothing really deep or new in this manga, just the same old love triangle, jealousy, and unrequited love, but the execution is good enough to give me butterflies at the important moments.

Iogi steals the spotlight here
Spoiler (mouse over to view)
sadly, he ends up being forever alone
.
His character is the most dynamic and interesting (which explains why both the sequel and prequel of this manga are all about him). You can also read Koi no Tsumeato (written by the same mangaka), where the character who resembles him gets a better ending.

Good manga!
by Namiya
February 18th, 2013, 9:30pm
Rating: 9.0  / 10.0
I love the art and I love the love triangles this mangaka draws!
She manages to make all 3 people likable so that I never can make up my mind who I want the protagonist to end up with!! And for me, that's a great thing.
I liked the complicated story of Iogi and Shirasaka, the fact that both guys love him and I also enjoyed the way it ended.
If you want a more complex love triangle that the usual yaoi stories and 3 actually likable people then give this a read!
Was this comment useful?  Yes

I like it, but it totally doesn't seem...
by nowyat
August 14th, 2011, 11:01pm
Rating: 10.0  / 10.0
like it's written by this author. At first, I thought it was written by Umetarou, who I really like, and had to double-check a few times before I believed it. The pretty art and angsty plot line are so similar. But I love the story. I'll go read everything by this author again, in a new light now. Sorry for the weird opinion, I just had to vent.

P.S. I don't understand why everyone wants him to be with the actor. That guy didn't care about his happiness at all, blackmailed him repeatedly and damaged his psyche.

It was good!
by LovelyMocochang
March 21st, 2011, 3:33am
Rating: N/A
I liked it(: This manga gave me that 'pang' feeling in my chest. I love that feeling!
It's definetly a must if you like to see a good love triangle. Or unrequited love.

Possible Spoler:
Spoiler (highlight to view)
But I wonder if sensei came out with a sequel regarding Logi.
Was this comment useful?  Yes

I feel bad for Logi
by asiancrackerfolife
August 1st, 2009, 12:25pm
Rating: 2.0  / 10.0
The Shirasaka and Tamiya pairing was kind of boring to me, it was okay to me cuz I didn't like them that much. I wanted Logi to fall for someone else in the manga and fall out of love with Shirasaka. I didn't like Shirasaka's character that much so I was hoping him and Logi wouldn't get together,but at the ned when Logi expressed his feelings I wanted them to be together. I feel bad for Logi even though he was wrong in what he did I liked his character more and he was truly in love with Shirasaka. Someone said it was a satisfying ending, for me yes and no. I wish Logi would of got someone too I want to see his happiness. I liked Logi the bed has really deep feelings, even if he can't show it. Logi was so he's hot, rich, has attitude, and has deep feelings, even if he didn;t show them in the right way. Anyways it was okay I hope they make a series about Logi. Does anyone know if they are. I doubt it, but I hope so.
Was this comment useful?  Yes

great story!
by huggybear1218
October 13th, 2008, 1:25am
Rating: 10.0  / 10.0
at first i felt more pity for his sempai than masami but i really love how the series progresses. how even though there are some serious rough patches...it has a satisfying ending!
Was this comment useful?  Yes

i like it...
by ese
September 13th, 2008, 8:32am
Rating: 8.5  / 10.0
Yep, some of the readers may not like this plot but i liked it. I like Tamiya's characteristic and furthermore, his character strengthen the plot. I'm kinda dissapointed with Shirasaka that is indecisive in making decision whom he want to be with.
Was this comment useful?  Yes

ehh
by mangafan321
July 29th, 2008, 9:00pm
Rating: 1.0  / 10.0
I really couldnt stand Shirasaka, i felt bad for the other two characters (Spoilers) this guy is one minute sleeping with one guy, and then all of the sudden for some stupid reason he is sleeping with the other guy, and yet these two guys seem to find it okay to sleep with the same guy, its so disgusting. Sadly, i felt like the two other guys actually did love Shirasaka, i dont know what it was that Shirasaka but i dont think think he truly cared about either one of the two guys, he just seemed like a confused and weak man.
Was this comment useful?  Yes