Login to add items to your list, keep track of your progress, and rate series!
Description
Kentarou's former shogi teacher taught him to (metaphorically) dive into the 81 squares of the shogi board. Thus, his nickname is "81 Diver". He has failed to enter the professional league of shogi competition. However, he continues to play the game for a living by gambling at amateur shogi clubs. 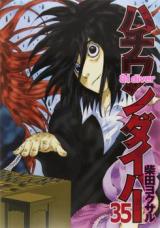 Note: You must be logged in to update information on this page.
Forum Posts Click to view the forum
81 Diver spoilers
over 6 years ago

A soulful tale about how shogi is awesome and a powerful way of communicating among individuals
by Nintakun
May 11th, 2022, 5:55am
Rating: 10.0  / 10.0
First things first, I started reading this manga barely knowing shogi's basic rules and having a slight idea of how it works. Trust me, this isn't really that much serious of an issue when reading this manga. It's obviously better if you know how shogi works, but it's not really that necessary.

And now I really want to say how much I ABSOLUTELY LOVED THIS MANGA, and I need to say it with BIG ASS LETTERS AS THESE because this manga does that all the time, and very few were the times I was so positively surprised by something I've experienced like this. I just gobbled a 35-volume shogi manga in less than a week, and I've never really been that interested in shogi before that, so I guess that's a testament to how special 81 Diver is.

81 Diver is ultimately a story about people connecting with each other through shogi, with a zero in his journey to be a hero and getting to the heart of the thicc beauty of his dreams in the process, while literally saving the world doing so. Yeah, it's one of those "the power of love can save the day" stories and it's totally unapologetic about that, not afraid of being super extra cheesy in the slightest, and I love shit like that. It has SOUL like very few things out there, and with its great cast of characters it'll make you probably at least think shogi is cooler than you thought before, and if you doubt it, this manga will literally be loud as hell about it from beginning to end.

Yeah, the character art can look very crude at first, but the more you read it, the more you get used to it and probably wouldn't want it any other way, because it has a lot of personality. It was my first time reading any of Shibata's works and now I'm highly interested in checking out the rest, because I think I really dig his style of doing manga. It flows so smoothly it's comfortable and engaging to read.

It may not be everyone's cup of tea but it was totally my kind of shit and I loved it and I think a lot of people out there would like too if they gave it a chance, not letting the shogi barrier stop them.

And yeah, I think I've just discovered one of my new favorites.
Was this comment useful?  Yes

It only has shogi to its name, and it you don't know how to play then it has nothing substantial on it.

Everything else is subpar, the art, the jokes, the plot is nonsensical and full of bullshit, the characters are dramatically emotional, but also a bunch of idiots to the point that it gets annoying (something that somehow the author turns into an important plot point).

So if there's nothing really worth the read why would anyone go through the hard work of scanlating it, and then someone else waste their time reading it?

Well the premise is kind of unique, yet pretty damn cliche, this is like the prequel to a manga in which the world becomes a place in which a game can be used to solve everything, except that instead of trading cards, you battle it out with shogi this of course leads to some over the top analogies, as it is tradition with sport manga, and then later on he mixes some nonsense action here and there making crossovers with some of his previous works.

So 81 driver tells the story of how the world became stupidly obsessed with shogi.

Oh and there are big tits too, i love me some chubby bit titi girls, but then again the author's art is not his selling point, matter of fact, the tits he draws are kind of appalling, his characters all end looking like they had a bad silicon boobjob from the early 90's, like a really bad silicon boobjob, i don't think anyone will bust a nut to his art.

I guess the only reason i don't rate it lower, is because i know that somehow i have read worse things, but man do i regret this.

Don't waste your time!
by bigmcn
July 21st, 2018, 3:51am
Rating: 6.0  / 10.0
This was flawed in so many ways, it was a cute idea that shouldn't of been more than a very short manga. I read all the way to chapter 162, but decided to stop reading further as everything seemed far too pathetic. I loved Hikaru no Go, best board game anime/manga ever. Same Artist as Death Note. Compared to that, this was crap!

shinkenshi
by HuhWhat
September 20th, 2011, 9:42pm
Rating: 7.0  / 10.0
Shogi's not really a game you can make a manga series around unless the main character has big breasts. Unfortunately, our protagonist is male. Boo.

Art's as atrocious as ever, but that was never the guy's selling point.

I really need to stop sounding so negative in these comments. Hachiwan Diver is a solid manga about warriors dueling it out through shogi. The complicated rules of shogi made for an easy decision on my part to never pick up the game, but my brief stint as a competitive Chess player during the 5th grade allows me partial familiarity with the concept. A majority of the manga deals with amateur "money matches" but delving further into the story reveals that these players hold very little interest in monetary gains.