Login to add items to your list, keep track of your progress, and rate series!
Description
1) Rumble Rush
New worker at the train station, in a desperate situation being played with by a groper. A groper, who targets only young men during rush hours, appears! And… the new staff at the train station Akiyama, who by orders to become the bait for the groper, gets to experience the attack of the pervert finger…!!

4) Roar of the Sea (Shiosai)
Hirofumi returns home when his father dies. Will he meet his high school friend Jin who confessed to him when they were teenagers and was part of the reason Hirofumi hasn't returned home for 15 years?

6) After ... More...
1) Rumble Rush
New worker at the train station, in a desperate situation being played with by a groper. A groper, who targets only young men during rush hours, appears! And… the new staff at the train station Akiyama, who by orders to become the bait for the groper, gets to experience the attack of the pervert finger…!!

4) Roar of the Sea (Shiosai)
Hirofumi returns home when his father dies. Will he meet his high school friend Jin who confessed to him when they were teenagers and was part of the reason Hirofumi hasn't returned home for 15 years? 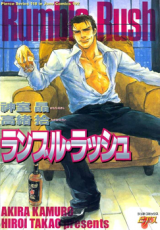 Lol
by OmNom
December 2nd, 2019, 12:22am
Rating: N/A
So at first I thought the first story was too questionably bizarre and the second too PWP (even if it is hot), but then the fourth and fifth stories rolled around and they're even less to my liking, meaning the first two stories actually turned out to be most tolerable to me in this tankoubon after all lmao. At least they're deliberately silly and far-fetched by nature so I can laugh at them and not take them seriously; meanwhile the way the authors handled drama and angst in the last two stories just isn't my cup of tea at all and made them very unappealing and unenjoyable to read for me, even if the plots themselves aren't necessarily the worst. The continuation of foot fetish guy's story is so-so at best and not very memorable. The extra at the end is cute though, and the cameo of Ijima's thirsty arse is quite funny lol.
Was this comment useful?  Yes

Graphical & intense.
by Yankee-chan
October 15th, 2013, 12:27pm
Rating: 9.0  / 10.0
Yes, this collection is very graphical and might not be to everyone's liking. It's more mature and not focused on the cute part of the characters, like lot's of other Yaoi Mangas are these days. The characters are man and therefore manly, like having edgy personalites or scruffy styles. In my eyes, this is a nice change of pace and the variety of characters has been pretty refreshing. Although the newer works of the artist show some improvement.

The storylines vary, too. Some are rather blunt and directly, putting weight on the physical part of the relationship between the protagonists. Some may call it PWP, but others may at least see some story build up around the smut scenes.

However, other storylines are actually pretty intense and have depth. Especially Shiosai picked my interest, because of the tragic elements and facial expressions of the characters involved. Stay was also a good read, but can't be taken lightly and left me with some questions. Well, but I guess, this might be a good thing for a story? Haha. All in all, the stories are intense and this because of many aspects.

Very good
by Sasageru
May 19th, 2011, 2:25pm
Rating: 9.0  / 10.0
Art blew me away (again), this artist always manages to draw so exquisitely without over crowding or confusion. Secondly, the stories are erm, for lack of a better word - sexy xD the first story cracked me up a bit, but i enjoyed it. The following stories were also amusing. I really enjoyed this. What i also really appreciate with this manga is the fact that men looks like men, right down to their hairy legs

I don't mind bishies, but realism in character designs is better in my opinion.
Was this comment useful?  Yes

some good some so-so
by pleochroic
March 26th, 2011, 2:57pm
Rating: 7.0  / 10.0
no, it's not about "gay men doing sex" -- it drives me nuts when people claim such things (the ones who claim it are never gay men themselves, of course). BL is not about gay men in general, and fujoshi would be well-advised to remember that BL is pure fantasy rather than to imagine that they're learning anything about how actual gay men feel and act. with a very few exceptions, and condom use notwithstanding, BL mangaka do not portray truths about gays, even if some of the characters look more like real men these days.

as to the stories, they're a mixed bag for me. the train gropage was funny and hot, though there's dubcon (iijima is really into 3P, isn't he). dr H could massage me any day (erections in underwear are hot). i like that foot-fetish-kun fights back in high school maze. shiosai is thoughtful and sad. non-con BDSM is not one of my kinks, and while i would have liked stay without the ending it had (as a hot but cautionary tale sort of thing); the standard BL ending turned me off. the last bit is mostly forgettable; i don't like how the characters act at the start.

the art was not yet as good as kamuro does today, but it's got plenty of good things about it -- bodies are manly with good muscle tone, some have body hair, some are older. i like it a lot.
Was this comment useful?  Yes

Manly Men and A Variety of Story Types
by MightyMaeve
January 17th, 2009, 5:37pm
Rating: 9.5  / 10.0
There are 6 stories in this unique collection of stories and art. The men are all muscular and attractive and. . . MANLY. *gasp* Not heavily bara, mind you, but definitely not girls with manly bits. The art that is disproportionate and therefore awkward appearing, is completely forgiven and overlooked because I was blinded to it by the overpowering redemption of the other parts!
The first story mentioned in the description above. Threesome! Done hot. Against a train door.
Another story tells about a mysterious Chinese medicine master who is visited by our unsuspecting uke for aid in his inability to sleep. Yup. You can see where that one is going. Hot rating is only medium. The doctor was kinda creepy.
Next, we have a man who's umbrella is left behind on a train. He is worried, wants to turn around and go back for it, but his partner makes fun of him because it's only a silly, cheap umbrella. They fight. He pouts and sleeps on the couch. What is this 'more' to the umbrella? (Guest appearance by the pervy boss from the subway story! Funny.)
Finally, we have an established couple, wherein one of the partners is feeling insecure at the thought of the other doing a bit of substitute teaching at the local high school. (Those high school boys are wild, gay-sex craved maniacs, you know.) What will happen when there is a confrontation in the gym late in the evening?
Now, for my 2 favs:
Sound of the Sea: is like a pensive, beautiful love poem. Jin's heart-wrenching guilt and Hiro's de-abilitating fear tumble this semi-tragedy into angsty seas of passionate story weaving and beautifully drawn night scenes at the ocean. The art is realistic and ethereal: It rips into you and doesn't let go. Powerful.
Stay: Gah! The hottest of the hot! Non con, kink, escapism sweet resolution, uncontrollable violence, terror, angst, BDSM-ish, pretty -and rape inducing- Japanese rope art, mysterious disappearances? What is there NOT to like?! If that is your kink, no squick-age, then do. it. up.
If you wanna try a new art style, this series has a story for everyone's tastes.

Funny, Pretty art
by eccentrrick
January 12th, 2009, 7:23pm
Rating: 8.0  / 10.0
I like the art in this one. Very beautiful muscular and hairy men. o_o
The thing I like about this particular manga is that, they wear condoms.
Go Protection! That's realistic stuff there!

I like how they threw in some comedy and supernatural stuff.
Although I'm not a giant super-smutty-yaoi lover, I liked this series. It's was a fun read!
Was this comment useful?  Yes

great art
by Ameonna
December 18th, 2008, 8:35pm
Rating: 8.0  / 10.0
I totally liked it. although the story was kind of simple and not very developed or deep but the art was just awesome. it was so real. two men were making love not a girly guy and bigger guy. it was totally manly and very real, of course it is not bara (guys are very handsome and hot) but it is about gay men doing sex, nothing like usual Yaoi prince like boys.
Was this comment useful?  Yes