Login to add items to your list, keep track of your progress, and rate series!
Description
From Phoenix Serenade Scans:
A story set in the Taisho Era. Meet Miyabi Neko, a girl with bad luck from a small place called Izumo, who aspires to become an actress by joining the capital's most popular acting group Hanagumi! And after some hard work, she was finally accepted into Hanagumi! But, when she reaches the capital, there is some disturbing news. Apparently, she is not to join HANAgumi, but the capital's music group KANADEgumi! And she meets some strange but handsome young men on the way? What is Neko's life going to be like in the capital?! 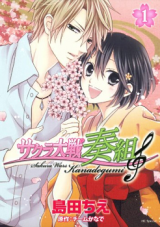