Login to add items to your list, keep track of your progress, and rate series!
Description
In the near future: A world renowned mathematician / physicist Francis Dullam loses his left brain hemisphere and retires from hard science to study dolphins. Several years later he comes up with the new thesis which is essentially a collection of dolphin footage. As the "thesis" is being severely criticized by the media, Ishii Mitsunari (a student living in America) discovers the idea hidden there, that will help to create the true Artificial Intelligence.
Motivated to create the AI first Mitsunari leaves for Okinawa to follow the footsteps of Dullam. 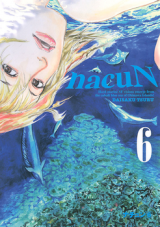 .
by kari+
October 19th, 2017, 1:09pm
Rating: 6.0  / 10.0
strange story. thought it be interesting with science and dolphin. i wish the story was about mute girl or so,ething and focus on science and philosophy work or something and a boy studing dolphin to link how theropy would work or so something. imstead we get this crazy story that sometime dont make sens. the sart was interesting but getting out of hand. im reading because i want to see what happen but yeahd....

Tries hard to be interesting
by Mytskine
January 28th, 2017, 5:19am
Rating: N/A
The story takes place in a near future where humanity can easily live in deep sea, thanks to suits and artificial gill/lungs. Almost everything else is the same, except that industry and robots seem to have disappeared, so fishing requires many boats and a throng of workers. The starting point is that studying the behavior of dolphins gives the ability to build a perfect artificial intelligence.

For two volumes, the manga is mostly about the social life in a small island of Okinawa, with extra drama. The main character is a greenhorn puffed up with pride and dreams of greatness. He has to adapt to the harsh life of fisherman and swallow his pride, though his inner self-conceit is hardly changed.

Some characters are really interesting. I'm quite fond of the blended family where the young wife fools around and fights with her stepson (not physically, just sour words). Some scenes of fishing or rural life are also very good. I'd never seen a realistic slaughter of a pig in a manga (though I would have expected a more formal slaughter, as still do small farms where I witnessed it).

Unfortunately, as chapters go by the mangaka tries hard to add as much spice as he can to the story. After the genius scientist and the secret of the dolphins, he adds youkai and spirits, triads and the camora, magic rituals, secret society of the islanders, the corrupt power of the Vatican... And of course, a load of ecchi. By the end of volume 3, the taste was far too heavy for me.

I believe there's a scene that shows how the mangaka sees his readers. When the main character at last manages to observe dolphins, a young woman is swimming with them. She wears fins and an artificial gill, and a wetsuit open down to the pelvis, so that her big breasts are fully visible. As a male reader, I felt insulted. Swimming fast with a half open wetsuit is impossible, and it hurts the globally realistic tone of the manga. Am I supposed to switch off my brain each time a naked girl is drawn?

MC is not an asshole
by Laclongquan
November 13th, 2016, 12:52am
Rating: N/A
Not more than a normal late-start chuunibyou Uni student. I am sure you know such character.

FOR WORLD DOMINATION! So he move to a fisherman island, try to work part time on board to have boat time to research dolphin. In order to develop AI base on what he interpret from a dolphin movie a mathematician made. Assuming the Uni student interpret it right.

So yeah, just think of it as a painful antics of a young man.

A bleak art-house manga about dolphins and assholes
by residentgrigo
November 10th, 2015, 6:36am
Rating: 5.0  / 10.0
This psychological tale is pretty hard to describe so i will call it "avant garde". The mood and main theme are very intriguing and the protagonist is a proper asshole for once. Interesting and i don´t know how mainstream readers will respond as this seems like a think piece first and foremost but the antisocial romance is quite intriguing too.
The manga then goes of the rails during Vol.2 and quickly becomes an ultra bleak art-house porno, with one "controversial" theme after the other. I am not quite sure if the overall narrative can be called "good" or focused.
It is still somewhat worth reading due to the strange nature of it all and few manga exist with zero likable characters.