Login to add items to your list, keep track of your progress, and rate series!
Description
Ralph, the Tyrannosaurus, is the king of the dinosaurs. However, because of a meteorite's impact, Ralph is sent 60 million years into the future only to possess the body of a honours student, Mikobayashi Kana.

Latest Release(s)
c.Oneshot by Taruby over 16 years ago
Search for all releases of this series 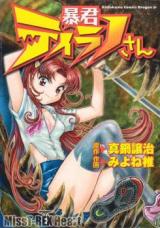 hahahahaha!
by shoujo22
October 21st, 2009, 1:07pm
Rating: 7.5  / 10.0
Someone recommended that I read this oneshot, so I did. This freaking story is one of the weirdest things that I've ever read. For the first time in my life, I have no idea what else to say. Read it for a good laugh, or (like many others before me have said) for the sheer "wtf?" factor.

okay wow
by Shuu-chan
December 7th, 2008, 8:42pm
Rating: 8.0  / 10.0
I thought this was an incredible oneshot! It was weird and just flat crazy, but it had some really interesting characters. I HIGHLY recommend reading this at least once. The whole last third is AWESOME!
Was this comment useful?  Yes

Nice oneshot
by Jhono1
July 8th, 2008, 5:29am
Rating: 7.0  / 10.0
Nice little oneshot here about Ralp the T-Rex who gets thrown in the future and into a teenage girls body. Where hillarity ensures, due to going from RALPH SMASH, to beeing a week teenage girl. Wierd ass plot though.

It did feel a bit rushed, and Is this really from 2005? The art feels like it's from the 80's, and the art gets messy sometimes. Still it's not bad, I liked it. Well worth reading imo.

Just try not to think about it too much!

Its shortcomings came from its jerkiness of plotlines, scenes and lack of details. It was an old manga after all. With its kinds of ideas, if it's done nowaday they can draw it out to at least 3 vols. As it is, one is just too short. Hence the 8.
Was this comment useful?  Yes

Overall Impressions
by holy`bell
June 20th, 2007, 1:43am
Rating: 8.0  / 10.0
Yes. This manga does give you that "wtf" look on your face as you read though it. Lol. ^^ Like akurashy said, the story did make sense, despite the weirdness here and there. Still, I enjoyed it and it made me laugh all the way though.

fucking insain
by Anonymous
March 11th, 2006, 4:51pm
Rating: N/A
this manga has got to be one of the strangest things i have ev er read. worht reading shearly for the wtf factor
Was this comment useful?  Yes