Login to add items to your list, keep track of your progress, and rate series!
Description
From MangaHelpers:
This volume is a collection of short stories. The title story "Aka no Sekai" features a boys' summer camp out in the country. The main character, Regulus, is reluctantly attending the summer camp, where he shares a room with a cheerful boy named Milan. Soon after arrival, though, some of the other boys begin acting strange, while claiming they want to see the color red. Will Regulus and Milan be able to figure out what is happening before it is too late? 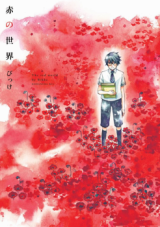 Sad
by Ah_Cat
June 8th, 2017, 9:19am
Rating: 10.0  / 10.0
It's my first time reading this type of manga. First story was a bit off, I couldn't really get into it but the second one made me cry. Cry a lot actually. Third story was a very good war fantasy, while the last one made a very nice ending and got together all of the loose ends.
Maybe it's because I never encourted this type before but for me it made a great impact. The art is amazing, the devastation of war showed very well. Stories were well thought and nicely connected between generations. Just make sure you understand it's tragedy before you start reading, and I think you will like it.
Was this comment useful?  Yes

So-so
by calstine
January 13th, 2015, 9:35am
Rating: 4.9  / 10.0
I've found this to be the case for many of the stories Bikke has written, with the exception of Shinkuu Yuusetsu. The art is nice and the characters are likeable enough, but the plots are so... mediocre. Which wouldn't typically merit a comment, but when even I can come up with several ways events could have transpired to make things more interesting whilst keeping the setting and the characters unchanged, well...

The first story was fairly dull despite its unusual premise, with no underlying message, no real suspense, and an uninspired ending. And yet it could have made for an excellent little horror story if the mood of a summer camp slowly succumbing to bloodlust had been played right. 4.0/10

The second was actually not bad: a realistic wartime romance. Still nothing special, been done before a hundred times, but nice enough for its length. 5.8/10

The third oneshot had some lovely characters in the form of the pigeons, and their owner was just the kind of guy I like, but the message - "birds want to be free to fly the skies" - could have been conveyed in a less contrived fashion, in a way that didn't make their right to be set free seem contingent on whether or not they used that ability to help humans. 4.8/10

The fourth was...bland. A cute romance, again, but unlike the one before it, it was neither realistic nor particularly engaging, since the relationship progressed too fast for my liking. I loved the female MC's (non-tragic) heroic sacrifice, though. This story owes its rating solely to its portrayal of girls as being just as capable of heroism as guys! 5.0/10

Overall: nothing special, though I thought the way the author interlinked all the seemingly random events was pretty clever, if completely pointless from a plot-based standpoint. If you don't have a lot of time to kill, I recommend skipping Aka no Sekai.