Login to add items to your list, keep track of your progress, and rate series!
Description
Suffering from unrequited love, Todou Tsukasa, also called "the moody pillar", walks into a barbershop. The cheerful barber not only gives him a sexy new haircut, but also advice on how to better carry himself. Tsukasa takes that advice to heart and goes on to fame and success. But he never forgets the barber who helped him when he needed it, and so, he keeps dropping by the barbershop. However, confidence didn't come along with the new haircut nor with the fame and success, and his feelings are neither conveyed nor understood well.

Includes a really cute series of short stories about an ecl... More...
Suffering from unrequited love, Todou Tsukasa, also called "the moody pillar", walks into a barbershop. The cheerful barber not only gives him a sexy new haircut, but also advice on how to better carry himself. Tsukasa takes that advice to heart and goes on to fame and success. But he never forgets the barber who helped him when he needed it, and so, he keeps dropping by the barbershop. However, confidence didn't come along with the new haircut nor with the fame and success, and his feelings are neither conveyed nor understood well.

Includes a really cute series of short stories about an eclectic band and their love interests: the flamboyant lead singer's long-time love for his kouhai, the reserved guitarist's secret crush on a convenience store clerk, and sex-addict drummer's one-night stand with an unwilling businessman. Less... 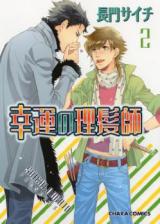 Dragging and so boring
by Fati1367
December 27th, 2021, 7:46am
Rating: N/A
Everything about this is boring and overrated
Same things repeating for f**king 2v 🙄
Was this comment useful?  Yes

Cute
by suzakufire
July 23rd, 2021, 5:22am
Rating: 7.0  / 10.0
Pretty cute story, I do like the characters, and the seme is a special kind of pure innocent sweetheart, very endearing. The romance felt a little forced, there wasn't a whole lot of chemistry between the characters, but I didn't mind it too much because their scenes were just too cute and pure.

It did get a little draggy after a while, there's only so many times you can repeat the whole blush-y innocent pure love types of plot. Could have been condensed into one volume.
Was this comment useful?  Yes

Just what I needed
by nausicaa70
February 26th, 2017, 5:44am
Rating: 8.0  / 10.0
I can't get enough of fluff but it's usually too over-the-top. It isn't the case here. Fluff as I love it !
And their interactions are so sweet I can't help but smile while reading it. They're so innocent xD
Was this comment useful?  Yes

Good, if you like this sort of yaoi
by luminousbrink
May 22nd, 2013, 10:34am
Rating: 8.0  / 10.0
I usually don't go for these kinds of yaoi stories, but this is nice. The art is beautiful, the characters are drawn very well, and the story is cute and heartwarming

Overall, I would personally put this at around a 7, but I'm rating it based off of it's type of yaoi, and I think it's good for it's area.
Was this comment useful?  Yes

<3
by Mochi__x
November 11th, 2012, 12:06pm
Rating: 10.0  / 10.0
So cute~! The main couple are totally adorable! There's so much love and light-hearted fluffiness to this manga that I'm always stupidly grinning at every page ^__^
The way the mangaka writes this story is so unique, it's written as though it's a fairytale and I really like that aspect of it. The plot is interesting and there's no angst or stupid misunderstandings. Yes the couple have some minor difficulties but it's not the same old nonsense that's found in most yaoi.
I also love the two old men that frequent the barbershop haha, they're so perceptive and they clearly support Tsukasa & Nachi's relationship XD
Chapter 6 seems a bit out of place to me really... it's quite entertaining, but too short for me to really like any of the characters. A follow-up chapter about them all would be nice.
A lot of people have mentioned that the main story didn't seem to have a proper ending, but don't worry, 2 more chapters have been released since the comment below mine was posted here (and it looks like it's still ongoing). I actually thought it was completed before too, but luckily that wasn't the case so hopefully we'll get a happy (and satisfying!) ending to this fairytale-style story.

The withdrawl
by Dizzy_O_Desi
April 12th, 2012, 10:13pm
Rating: 10.0  / 10.0
Okay I feel as though the first couple didn't really get an end but it was loads of fun to read and the last chapter was way to funny and the unwilling business man was the best part of the whole manga for me. XD
Was this comment useful?  Yes

Lovely
by Embracing Madness
March 10th, 2012, 12:02pm
Rating: 10.0  / 10.0
I absolutely, ABSOLUTELY, adore this manga. I don't know why - when thinking about it, it seems like the standard fluffy entertainment kind of manga, with no deep character analysis or creative twists to the plot. However, it's just somehow really adorable in a cheesy way. There's the beautiful looking protagonists, the oblivious personalities, the funny grandpa supporting characters, and a feel-good situation throughout the whole manga. It tugs at my heart and makes me want to squeal in horrible cutesy ways every time I re-read it - and yes, I re-read it a LOT while waiting for the next volume to come out. Seriously wonderful manga.
Was this comment useful?  Yes

Simple
by Serendipity_
October 15th, 2011, 6:55am
Rating: 9.0  / 10.0
I like this kind of manga, it´s simple, yet very good. Also, it has this really nice flow to it. The main story was cute, but I wanted a liiitttle bit more. Felt like something was missing to the ending ( Although it was good, it didn´t really feel like it was really ending ).

The one thing I really liked about the main story was how the mangaka choose to tell the story in a "fairy-tale" style. I haven´t seen that kind of thing before, so it was a total plus for me so see something new.

Fluff
by naomi
May 12th, 2010, 3:50pm
Rating: 10.0  / 10.0
Seems I'm not the only one here who thinks so: this series is just pure fluff <3 Just to reiterate everyone else's comments: lovely art, sweet characters, not too deep a plot, but I don't think that was the aim, which makes for a perfect read to light a smile on the face (I think I might've squealed more than once too haha!). Plus I'm desperately hoping for an expansion to the characters introduced in c6

cute!
by shouichi
April 1st, 2010, 5:33pm
Rating: N/A
Very very cute story!!! I love the seme while his appearance is soo manly but his personality is super cute!!! XDDD
Wel...the uke is more mature than him! XDDDDDDD
Was this comment useful?  Yes