Login to add items to your list, keep track of your progress, and rate series!
Description
A series of natural disasters has reduced the world to rubble, with the survivors doing whatever they must to survive in a world gone mad. But one young boy, Kakugo, gifted with amazing martial arts and a superpowerful suit of armor by his late father, has been charged with making the world (or at least his school) a safer place but his sister has a matching set of skills and equipment, and she`s on a mission to bring peace to the world. By wiping out humanity. 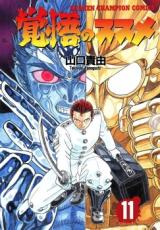 Note: You must be logged in to update information on this page.
Forum Posts Click to view the forum
Can't update release info.
about 1 year ago
Why is nobody translating this?
over 7 years ago
Apocalypse Zero, is it good?
over 12 years ago

Intentionally messed-up.
by likalaruku1
December 21st, 2020, 6:38am
Rating: 7.0  / 10.0
Art style can only be described as a 1980s twist on 1960s character designs. The weirdest blend of cartoony stylized & realistic anatomically correct characters co-existing like it's Cool World. Kakugo's head looks like realistic fanart of Nny from JTHM.

Comes off as unintentionally funny because I think the series is taking itself seriously while being so bombastic.

The main villain, the naked chick, is actually Kakugo's older brother (not a spoiler, it's revealed early). Still uses male pronouns after the sex change to female, which happened to his body after merging with the Kasumi armor.

There's a minor art shift for lesser characters that causes Haoka to look like a teenaged Zenigata from Lupin III (boosted by the fact that their teacher is naned Zenigata).

The monsters are basically horror versions of the creepy senior citizens in Studio Ghibli films, like Yubaba from Spirited Away, & The Witch of the Waste from Howl's Moving Castle.

On the Devilman thing, Harara is like a blend of Sirene & Ryo & Kakugo is like a stoic Amon.

The hero's love interest Horie is not exactly stock standard for a shounen series. She's on the doughy side with a body not unlike a Chibi. She develops an instant crush on Kakugo, but he shows no interest in her, & is eventually won over by her strong personality, caring nature, & defiant spirit.