Login to add items to your list, keep track of your progress, and rate series!
Description
1-2) Howl at the Moon
Miki is the bodyguard of the super-model, Ran. He's also the only person who knows that the golden-eyed Ran is in fact a werewolf. Not only does Ran have an animalistic sex-drive, he's also inhumanly strong. “Then, why does he need me as his bodyguard?” Miki wondered… And then, Ran was stabbed by a fan while protecting Miki...

3) Intoxicated by the Moon
Luke, the owner of the modeling agency where Ran works, is also a werewolf. Madoka, his assistant/secretary is always walking in on Luke seducing women in his office... but when the full moon appears, Luke is always ... More...
1-2) Howl at the Moon
Miki is the bodyguard of the super-model, Ran. He's also the only person who knows that the golden-eyed Ran is in fact a werewolf. Not only does Ran have an animalistic sex-drive, he's also inhumanly strong. “Then, why does he need me as his bodyguard?” Miki wondered… And then, Ran was stabbed by a fan while protecting Miki...

3) Intoxicated by the Moon
Luke, the owner of the modeling agency where Ran works, is also a werewolf. Madoka, his assistant/secretary is always walking in on Luke seducing women in his office... but when the full moon appears, Luke is always at Madoka's house... why!? The appearance of a young new model complicates things even further...

5) Secret
Alan is your typical playboy - money, women and more money. When he meets an inexperienced Japanese transfer student, Masaki, in the university cafe, he decides to try it with guys too. Masaki soon realizes that he is only a toy to Alan, and returns to Japan. Years later, Alan runs into Masaki again... but Masaki is engaged!? Blackmail is in order...

6-8) Start with a Kiss + 2 page extras (Kisu Series)
Super popular high school student Nishimura Jun has a beautiful face, a great body and women lining up to have sex with him! So why is Jun still a virgin? The romantic Jun wants nothing more that a sweet and pure love. Hiding his virginity is becoming tiring, especially since kouhai Machida seems to be onto his ruse... 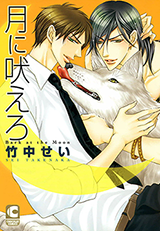 Torn
by OmNom
October 5th, 2013, 9:18am
Rating: N/A
Haha I'm just so torn right now. I adore this woman's artwork but her stories are so damn silly! Seriously, the drawings are almost heavenly while the plot developments are seemingly nonsensical, they're like polar opposites. If only one of those two could catch up with the other this would have been one perfect manga. I love, love the character designs and portrayals. Some chibis are also cute as hell. Too bad the stories couldn't be the same. I mean they all should have been very adorable or dramatic or heart-breaking etc. because the premises are all there! I don't mean that they're utterly terrible, it's just that while reading I found myself way too often questioning how on earth could the development be so silly. Such a shame really.
Was this comment useful?  Yes

Spoiler (mouse over to view)
First Story-- (Howl At The Moon) Ran is a famous hawt model, who is also apparently a werewolf, and takes Miki, a human, as a bodyguard. Stuff happens, Ran has a female stalker, stabbing, conflict resolved, Miki finds out Ran goes into heat during the full moon and is unable to control himself, cue dub-con sexy times. More sexy times.

Second Story-- (Intoxicated by The Moon) The seme is also a famous model who's also a werewolf, the uke is a manager of sorts for the company. The seme made him quit modeling in the past since he didn't like other people seeing 'his' uke/mate. Some conflict ensues in the form of a third party who wants to kill the seme for being a monster/not-human. It gets resolved, more sexy times ensue.

Third Story-- (Lost) FBI agents...yeah. Anyway, there's Ray, the uke, who's traumatized ever since he shot his partner who went dirty in self-defense, killing Steve. So Ray has a new partner named Brad who cares and stuff. Ray has suicidal thoughts but Brad has his back, confessions come up, really short sex scene, conflict resolution when they find out who the real cop-killer is. Oh, and the cat knows everything.

Fourth Story-- (Secret) Playboy Alan, the seme of course, gets bored with his usual fuck-buddies so he hits on Masaki, a foreign exchange student from Japan. Masaki leaves for Japan without a word. Few years later, Alan and Masaki meet again in a party, apparently Masaki's engaged to some airhead which annoys Alan, some maybe-dub-con sex, but, really, we find out Masaki's been in love with Alan since college. More smexy mansex.

Fifth Story-- (Start With A Kiss) Jun is a heartthrob who everybody assumes to have already done it with like, a lot of women, though he's actually a virgin who only wants to do it with someone he loves. Machida, a kouhei, is in love with him and persists with his feelings. Stolen kisses and stuff happens like falling in love and whatnot. Some sexy times ensue.

I read this mostly for the premise of a werewolf!seme but turns out that story is pretty short. I wish it had been fleshed out, but, oh well. Second story was also pretty lame and the third, I almost skipped but I decided to read it through anyway. It puts a new definition for one-shot. Seriously, super short stories.

The fourth, I liked better, I guess, again, if only it had been fleshed out and not confined to like a handful of pages. If drabbles could be put onto manga format, this collection would be it.

The fifth was the best out of the five, I guess, because it was a bit longer, but still super short. It was sweet and okay.

Give it a shot if you want a super short read and want to pass time. The characters aren't super fem or too bara and the sex can get pretty hot at some panels.
Was this comment useful?  Yes

Patchy
by MaZzAx
January 9th, 2011, 2:58pm
Rating: 5.0  / 10.0
I really like the first couple in this manga - the rest didn't really interest me. My problem was that the story was rushed, didn't explain much and left at a cliffhanger. It felt like one page didn't link properly to the next so despite liking the story I couldn't score it high. However I didn't read all of the stories so I haven't marked it low either.
Was this comment useful?  Yes

Nothing Spectacular...
by astroasis
December 24th, 2010, 1:50am
Rating: 7.0  / 10.0
The one-shots here were interesting, but not terribly exciting to read. Those who have an interest in werewolves will likely find it a lot more appealing than I did. However, I found the Kiss Series (also included in this volume, but listed separately on this site) to be very cute and sweet.
Was this comment useful?  Yes