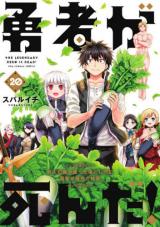 Note: You must be logged in to update information on this page.
Forum Posts Click to view the forum
Yuusha Ga Shinda Need For Update English Translation
about 1 year ago

Entertaining and fun story
by Theoneyedsnake
November 3rd, 2021, 8:53pm
Rating: 8.0  / 10.0
The manga was entertaining and had a light comedic tone with decent art and action scenes. It also did a good job of making a main character who isn’t a faultless being that always does the right thing or acts like a badass or saint all the time like many many other manga.

However, it did fall into the same trap as many other manga do; deaths are meaningless, people will have random changes of heart, etc. It also had too many ecchi scenes, which isn’t all bad but when you have a naked knee socks pic right after a serious chapter it really takes away from the atmosphere.
Was this comment useful?  Yes

what a ride
by Draggador
February 28th, 2021, 11:15pm
Rating: 10.0  / 10.0
back when i started reading it for the first time, i dropped it soon but then i went back to finish it years later & it turned out to be way more interesting than i had remembered — maybe it's because i've grown older & changed as an individual; it's a really unusual (unique?) mix of dumb jokes & serious storytelling; i hope that its mangaka creates more fun stories for us to enjoy

It's extremely funny
by Samken
December 27th, 2020, 1:45pm
Rating: 10.0  / 10.0
Touka is a very memorable MC, and the absurdity of the adventure he goes with his companions makes for some very laugh out loud moments where you can't help it but smile. The lengths he goes on about his fetishes will even begin to rub on you at some point, he's that convincible.

It's good for comedy lovers/ecchi/fanservice.

Man, MC's thigh fetish was so strong that it sort of rubbed off on me. Now, every time I see thicc thighs, I'm like, "the MC from that manga I read would surely put knee socks on that". THAT'S how strong his thigh fetish was.

Give it a chance, it gets really good later on.
by Rikoboi
December 28th, 2019, 2:56am
Rating: 9.0  / 10.0
I really like this Manga, the art is wonderful and the comedy is amazing, from the first moment its already great, but it even improves as the story advances, the characters are likeable too, you cant help but love them, even "Pieces of shit" like Kyle are amazing (If you're just starting to read it and dont understand this, just wait a little and you'll see an existence above the gods), the story gets really interesting as well, and it gets action scenes that while not being the main focus, steal the show, now, about the bad things... Yuna (The childhood friend), is the worst character by far, from beginning to end, it gets more bearable as the story progresses tho. The fanservice is also kinda exaggerated but welp, with Touka as MC it becomes entertaining.
Was this comment useful?  Yes

Decent laugh but becomes something else after a while
by Seregosa
August 18th, 2019, 6:27pm
Rating: 3.0  / 10.0
It was decent at the start but after several dozen chapters, you could feel it gradually turning more serious. A seriously stupid and ridiculous story with equally retarded characters doesn't have what it takes to pretend to be serious. It's an eyesore. While jokes keeps on being present even in later chapters, it's instead done in a way that is in no way smooth or well done, they're out of place because the became too serious in a stupid way to handle them.

While the scene is all serious and everyone is being all dramatic and tragedy is in the air, you can't just all of a sudden make the characters act like retards, pulling stupid shit and resolving things in ways that makes you remember the power of friendship and love and how they just inexplicably win because of... no reason whatsoever.

This manga is a trainwreck and not in a good way. I had hoped it would keep the initial comedic tone and justify its main characters(and everyone else for that matter) being retards and doing shit that makes no sense, but the author went somewhere he should've never gone, he ruined it completely and right now it's not worth reading at all.

This manga would be trash rated if not for the initial chapters being good and the majority of the ratings coming from people who loved those early chapters.

3/10 because the earlier chapters were quite funny.

when fan service is not just fan service
by somemango
March 27th, 2019, 5:31am
Rating: N/A
It's not everyday that fan service is used seriously by an author. Well, I'm not sure serious is the appropriate word but anyway. In 'The Hero is Dead' the fanservice is one of the plot key point and that's what make this title unique.
Of course if one is too serious to not see the derision in this subversion of the genre and don't want to see his hero fighting with kneesocks then this title is not for you. Otherwise you will certainly laugh a good amount of time.
Was this comment useful?  Yes