Back to Nanatsu no Taizai
You must be registered to post!
From User
Message Body
Otakuch
Post #775055

Nanatsu no Taizai manga sequel will be titled The Four Knights of Apocalypse. No more info for now.
Source

Quote
Kodansha USA Publishing confirmed on Tuesday that Nakaba Suzuki's The Seven Deadly Sins manga is getting a sequel tentatively titled Mokushiroku no Yon-kishi (The Four Knights of the Apocalypse). This year's 17th issue of Kodansha's Weekly Shōnen Magazine revealed the sequel on Wednesday. Kodansha released an announcement image for the sequel, as well as an illustration with the final chapter of the original manga.
Image too big for MU 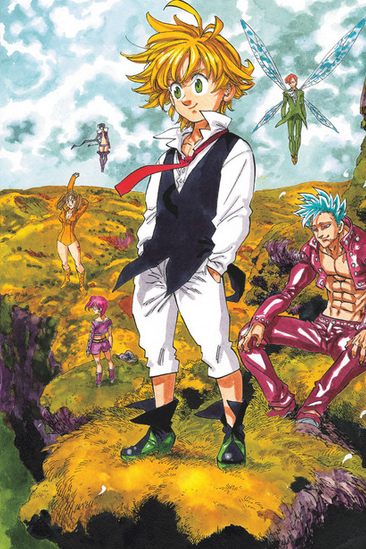 The story will center on Tristan, one of the four horsemen. Suzuki stated in February that side stories based on the "remaining characters" will come out "someday." However, he added that this will be after he "begins serializing a new work," confirming that he is working on a new series.
The manga ended in Weekly Shōnen Magazine on Wednesday. The manga's 40th compiled book volume confirmed on February 17 that the series will end in the 41st volume, which will ship on May 15.

Suzuki launched the manga in Kodansha's Weekly Shōnen Magazine in 2012. Kodansha Comics is publishing the manga in English digitally and in print. Crunchyroll is posting new chapters as they appear in Japan.

The manga also inspired the anime film The Seven Deadly Sins the Movie: Prisoners of the Sky that opened in Japan in August 2018.

The Seven Deadly Sins: Wrath of the Gods (Nanatsu no Taizai: Kamigami no Gekirin), a new television anime series by Studio DEEN, premiered on October 9, and is ongoing.
Source ANN

Back to Nanatsu no Taizai  Back to Top