Back to Boku no Hero Academia
You must be registered to post!
From User
Message Body
antid0te
Post #775603


Quote
The official website for the stage plays of Kōhei Horikoshi's My Hero Academia manga revealed on Monday that the My Hero Academia: The "Ultra" Stage: Honmono no Hero PLUS ULTRA ver. (A True Hero) stage play will run in Japan in July. The announcement also revealed that the "The 'Ultra' Live" event, which was scheduled to run in July, is postponed. 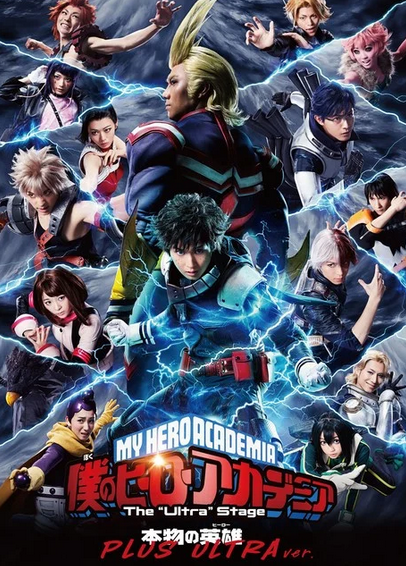 My Hero Academia: The "Ultra" Stage: Honmono no Hero PLUS ULTRA ver. will feature the villains Dabi, Himiko Toga, and Twice, who were slated to appear in "The 'Ultra' Live." The villains will have more power in the new "complete version" of the play.

The franchise's second stage play, My Hero Academia: The "Ultra" Stage: Honmono no Hero (A True Hero), was scheduled to run at the Shingawa Prince Hotel Stellar Ball in Tokyo from March 6 to 22, and at the Umeda Arts Theater Drama City in Osaka from March 27 to April 5. Most of the performances were canceled due to the spread of the new coronavirus disease (COVID-19).

The upcoming play will feature returning cast and staff. Returning staff members include Tsuneyasu Motoyoshi as director, Hideyuki Nishimori as scriptwriter, Shunsuke Wada as composer, and Umebō as choreographer.

My Hero Academia: The "Ultra" Stage, the first stage play of the manga, ran in Tokyo and Osaka in April 2019.

Horikoshi launched the superhero manga series in Shueisha's Weekly Shonen Jump magazine in July 2014. Viz Media is publishing the manga in English digitally and in print. The manga has inspired three television anime series, and a fourth season premiered on October 12. The series is getting a fifth season. The My Hero Academia: Two Heroes film opened in Japan in August 2018, and the second film titled Boku no Hero Academia the Movie -Heroes: Rising- opened on December 20.
Source: ANN

Back to Boku no Hero Academia  Back to Top