Quote
This year's 13th issue of Akita Shoten's Young Champion magazine revealed on Tuesday that Yasushi Hoshino will launch the Nihon o Tsukutta Otoko ~Shibusawa Eiichi Aoki HIbi~ (The Man Who Made Japan: Shibusawa Eiichi's Green Days) manga in the next issue on June 23. The 41-page first chapter will include color pages. 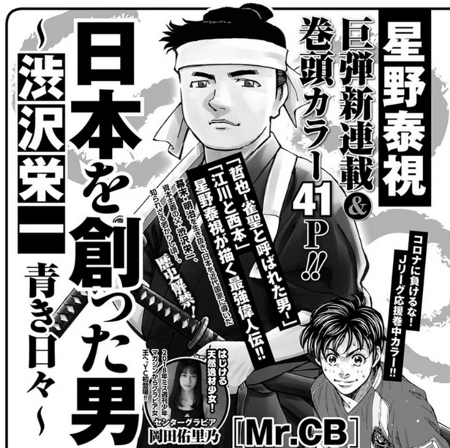 The manga will center on Shibusawa Eiichi, an industrialist known as the "father of Japanese capitalism," as a young man. Shibusawa lived through the Bakumatsu and Meiji periods and is credited with guiding Japan into its modern state.

Hoshino's original manga inspired the Gambler Densetsu Tetsuya television anime in 2000. His other manga include Egawa to Nishimoto (Egawa and Nishimoto) and an adaptation of Agatha Christie's The Pale Horse novel.
https://www.animenewsnetwork.com/news/2020-06-08/yasushi- hoshino-launches-manga-about-industrialist-shibusawa-eiic hi/.160396