Quote
Manga creator Hiro Mashima announced on Friday that his Edens Zero manga is getting a television anime adaptation. He asked fans to "Stay tuned for incoming updates!" 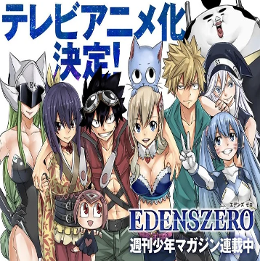 This year's 28th issue of Kodansha's Weekly Shōnen Magazine teased on Tuesday that the manga would have an "important announcement" in the magazine's next issue on June 17.

Kodansha Comics publishes the manga in English both digitally and in print, and it describes the story:
Quote
At Granbell Kingdom, an abandoned amusement park, Shiki has lived his entire life among machines. But one day, Rebecca and her cat companion Happy appear at the park's front gates. Little do these newcomers know that this is the first human contact Granbell has had in a hundred years! As Shiki stumbles his way into making new friends, his former neighbors stir at an opportunity for a robo-rebellion…And when his old homeland becomes too dangerous, Shiki must join Rebecca and Happy on their spaceship and escape into the boundless cosmos.

Back to Eden's Zero  Back to Top