Given Boys-Love Manga Gets Stage Play in August


Anime's Yuniko Ayana returns to write script
Quote
Natsuki Kizu's Given manga is getting a stage play adaptation that will run in Japan this summer. The play will run at Theatre 1010 in Tokyo from August 15 to 18, Kyoto Gekijo in Kyoto from August 22 to 23, Cool Japan Park Osaka WW Hall in Osaka from August 29 to 30, and Shinagawa Prince Hotel Stellar Ball in Tokyo from September 4 to 6. 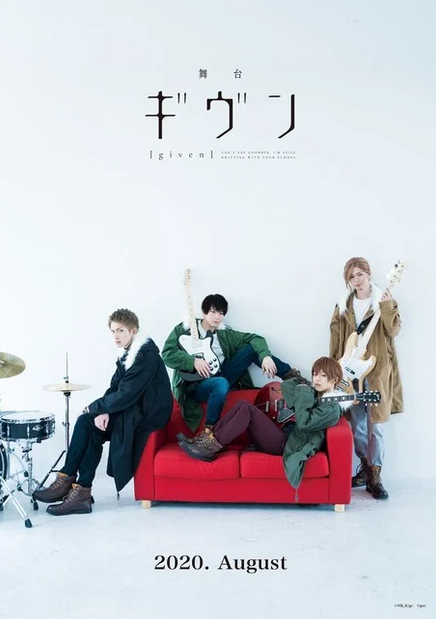 The cast will sing and perform the play's concert scenes live.

Fumiya Matsuzaki (A3!, Starry Sky stage plays) is directing the play, and the Given anime's scriptwriter Yuniko Ayana is handling the script. The manga's television anime adaptation premiered on Fuji TV's Noitamina programming block last July. The anime is the "first anime based on a boys-love manga" to air on Noitamina. Crunchyroll streamed the series as it aired, and it describes the story:

Somehow, the guitar that he used to love to play and the basketball games that he found so fun just lost their appeal...

That was until Ritsuka Uenoyama randomly met Mafuyu Sato. Ritsuka had started losing his passion for music in his everyday life, but then he hears Mafuyu sing for the first time. The song resonates with his heart and the distance between them starts to change.

The franchise's anime film (seen right) will open in Japan on May 16. Fuji TV's new Blue Lynx boys-love anime label is producing the Given film. The television anime focuses on high school students Ritsuka and Mafuyu, but the film focuses on the adult band members Haruki, Akihiko, and Ugetsu.

The manga runs in Shinshokan's Cheri+ magazine, and Shinshokan published the manga's fifth compiled volume in April 2019. Viz Media's SuBLime imprint for boys-love manga has licensed the series, and the first volume shipped in English on February 11.
Source: ANN

Back to Given  Back to Top