An ancient legend has it that if you manage to reach the top of Arashiyama at dusk on the fourth full moon day of the year, the gods will grant you a wish. That's why little Shin and Sumie run away from their grandmother's house to go to "the mountain of desires" and ask the gods to make their parents return from their "long journey through the sky". What they do not imagine is that in Arashiyama something more than gods awaits them. 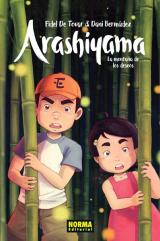