"There is a legend that tells Reynaud Manor is haunted by the apparition of a lady in a wedding gown, seen from time to time reflected in the mirrors. But as its inhabitants are found dead under strange circumstances, what appeared to be a common tale starts to become a fateful reality." Reflections is a one-shot comic book that includes two short stories: "Reflections", an horror story that takes place in victorian times, and "The Valley of Olives", a tragic medieval romance. 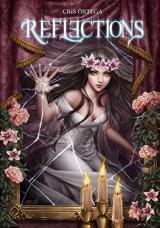