In a fairytale world where Queens rule and magic is power, a young princess is sent on the biggest quest of her life - to rescue a prince in need! But when she does, the prince is not so willing after all...
This epic gender-flipped adventure fantasy manga is created by the Swedish artist Natalia Batista. It is published in Sweden by Kolik Förlag since Fall 2013, and in the Italian online manga magazine Doraetos Manga. 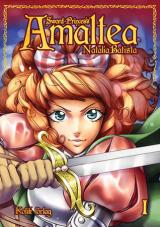