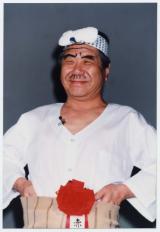 Comments
The "King of Gag Manga". He was born in Manchuria, China on September 14, 1935. After World War II, he left for Japan with his mother and grew up in Niigata Prefecture and Nara Prefecture. After graduation, Akatsuka got a job in a chemical factory, which he hated.

At the same time, he sent several manuscripts to various magazines until he made his debut in 1955 with the kashi-hon manga "Arashi o Koete". He gave up his day job and started to work under TEZUKA Osamu as a resident of the Tokiwa-so apartment building where he was roommates with ISHINOMORI Shotaro. In 1956, he formed a coterie group with Ishinomori, NAGASHIMA Shinji and SUZUKI Mitsuaki.

His humorous style and many anti-heroic comic characters transformed the field of manga and gave way to a new style of comedy. Taking his love of Japanese pun, wordplay and verbal sparring to its logical conclusion, Akatsuka had recently studied to become a rakugo, a theatrical storyteller of Edo-period humorous talks.

He had shunned orthodox medical treatment for cancer, and refuses to give up cigarettes and alcohol, instead supplementing his diet with traditionally prepared vegetable drinks. From April 2002 until his death, he was bedridden due to intra-axial hematoma. On August 2, 2008, he died of pneumonia at a hospital in Bunkyō, Tokyo.

He founded Fujio Pro where ADACHI Tsutomu, FURUYA Mitsutoshi, KITAMI Kenichi, SEINO Shuuichi and TORII Kazuyoshi were once his assistants.