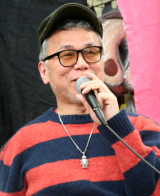 Comments
Maruo dropped out of senior high school in 1973 and worked in Tokyo for a bookbinder.

He is a self-taught artist whose works are characterized by a an extreme graphic violence and a mortifying vision of sex, many of his stories are permeated by a general surrealism.

Suehiro Maruo was born into a poor family on January 28, 1956, the youngest of seven brothers and sisters. An intensely private child, he claims not to have spoken more than a few words to his parents during the entire youth. He drew all the time as a boy and especially enjoyed tracing the popular action manga "Eightman." At age thirteen, Maruo began regularly skipping school in order to catch the daily showing of the popular soap opera, "Hyoten." He dropped out of school after junior high and was living on his own by the age of fifteen. His troubled ways proliferated, as he began shoplifting - at first, art books, and eventually almost anything. This behavior culminated in a two-week jail stay in the mid-seventies when he was caught stealing Pink Floyd and Santana albums from a local record shop. Maruo began drawing manga seriously at age nineteen. He brought his initial efforts to Garo, but was perfunctorily rejected. At twenty-four he debuted as a mangaka in the pages of a porn magazine, the title of which he has since forgotten. Maruo describes his mature manga as a "collection of thefts" (Kazuichi Hanawa was a major influence), and he admits to lifting the idea for "Planet of the Jap" from Philip K. Dick's sci-fi classic, The Man in the High Castle. Unlike many of the underground mangaka, Maruo is a supremely accomplished draftsman in the traditional mold, and he has gone out of his way to disassociate himself from the more self-consciously idiosyncratic aspects of Garo. He says that publishers think his works attracts the same audience as that of underground great, Yoshiharu Tsuge, but that in reality his biggest fans are high-school girls. He even progresses a deep hatred for all modern art.

Because of this his works didn't fit the mass-market magazines and he had to wait until the 1980 for making his official debut as manga artist.

He also has published short stories on the "alternative" magazine Garo.
The french critique Thierry Groensteen has defined him as "Marquis de Sade of the manga".

But Maruo is not just another "sex and violence" manga artist - he is one of the greatest retro-artists working in the manga field today. His drawings are elegant, and he uses innovative page designs. Today, Maruo's art and stories go far beyond the readers of Ero-manga; his work is sold in deluxe hardback book format, and limited editions of his lithographed prints sell for high prices.

He has realized that his work is most powerful and lyrical when he refrains from sex and violence, and so today he is working on a new series for the mainstream manga magazine Young Champion. Maruo's most famous works are 'Planet of the Jap' and 'Mr. Arachi's Amazing Freak Show'.