Login to add items to your list, keep track of your progress, and rate series!
Description
Asagiri Aya is a young girl who has fallen victim to bullies at her school. Looking for a way to escape her troubles, she looks to the internet for distraction, when a mysterious website called “Magical Girl Site” appears. Simply viewing the page is all it takes to hurtle Aya headlong into the deadly world of the Magical Girl Apocalypse. There, it’s fight or die, against a seemingly endless array of savagely adorable, frilly-skirted killing machines, each armed with magical powers and an unquenchable thirst for blood and chaos.


Anime Start/End Chapter
Starts at Vol 1, Chap 1
Ends at Chap 46 Where it Diverges 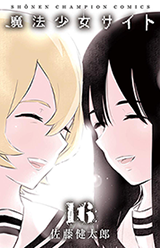 However, just like the prequel, the ending of the manga felt rushed and not fully fleshed out. The pacing and mood of the ending just felt like the author was rushing the story.

It’s either the author has no idea how write a good ending or they were forced to rush the story for whatever reason.
Was this comment useful?  Yes

Interesting start, unfortunately this manga is an exploitative piece of sh**
by PetiteTacos
October 22nd, 2018, 9:42am
Rating: 1.0  / 10.0
Like I said, this manga started off interesting and that is really what annoys me so much about it. It had some potential even if it was a bit extreme. Unfortunately all this manga really has going for it is being an exploitative piece of sh**. Almost every character are unlikable, they REALLY like the exploit any of the weaker characters, constantly show extreme bullying and has a strange obsession with men wearing the magical panties and showing them hugging the crotch area super tightly. Gross.
Words cannot describe how much I hate this manga. So if you are looking for a GOOD physiological horror story THIS IS NOT IT. This is more in the category of simply being shocking and exploitative. (Though if that's what your looking for look no further.)
Was this comment useful?  Yes

My advice is to ignore the self-professed manga gourmands who based their ratings and reviews on misunderstandings generated by speed-reading the first chapter. They may claim it's an opinion, but when they haven't actually read the source material and still decide to pontificate, then they're really just trolling.
Was this comment useful?  Yes

To the moron whom fails to grasp the concept of opinion.
by Commissariat
March 18th, 2016, 4:51am
Rating: 1.0  / 10.0
I liked Gantz, but I don't like this manga. It's because there's gore? No, it's because it's not a good series.
Everyone being mental gets tiresome after 30 chapters. There only being carnage, characters that can be interesting be killed left and right, getting motivations that are so unoriginal or stupid or just unexplained when they should (so your friend got killed... beccause??), or simply letting character whom are only there to be annoying disgusting (oh wow, such a use they have for the plot!). Is bad writing. This series is just a cash-grab, based solely on shock value.
Was this comment useful?  Yes

Insane
by hurafloyd
October 8th, 2015, 7:24am
Rating: 10.0  / 10.0
I've always wondered on what level of insane a mangaka has to be to concoct stories of this sort. Dont get me wrong, I have the feels of this sort of thing, even if they are wrong and messed up, I kinda enjoy them, there is always darkness in everyone and other kind of manga always hide them under some flowers, "normalcy" or "good vs. evil" crap, but this manga is backwards, everyone is completely mental except the heroine, that, after so much hardship she manages to keep her humanity (at least, as far as I've read).

A firehouse at your face of madness this one... and the level of insanity increases, the worst thing is, you cant avoid thinking there can be actual people thinking or behaving like the characters in this story, specially if you've been victim of bullying, reading the late news or history's atrocities.

The manga was like Madoka Magica but with more violent (I think so). And her and Yatsumura (I forgot her very first friend) just like Homura and Madoka... (Fujoshi is on now)...

Given a stick and became a magical girl. And then became a Magic Hunter kill every Mahou shoujo to get a stick to survive from the tempest. I didn't lnow what tempest in this manga mean...
But, it's like a calamity in the world...

Well, I give you a recommended to this manga. As well the mangaka other story Mahou Shoujo of the End.
Was this comment useful?  Yes

Such an interesting read.
by thekingofhorror
November 26th, 2014, 10:31pm
Rating: 8.0  / 10.0
May contain minor spoilers from the first chapter.
Spoiler (mouse over to view)
There's a lot of graphic images including bullying, abuse, and what seems like forced sex. I'm not sure I could continue reading if the story continued being that horrible to the main character.

Anyway, it's a dark magical girl story. Since the main character goes through so much in her life, she is welcomed to the "Mahou Shoujo Site" which grants her a stick to become a magical girl. The story revolves around her and this mysterious site along with other characters along the way.

Without giving too much away it's almost like Hell Girl meets Madoka Magica but, that's only because of some of the themes. The story for sure stands alone and is NOT a copycat like you might think. It also gets deeper into the characters and what they went through and why they do the things they do.
If you're a fan of horror, tragedy, and or magical girls I recommend this manga to you. Give it a shot.

Update: I'm still very much enjoying this series. The recent chapters have thickened the plot and it's getting more and more mysterious. As long as it continues on this route this could be a gem among other trash like it.