Login to add items to your list, keep track of your progress, and rate series!
Description
Meet Kazahaya and Rikuo. By day, they are two ordinary pharmacists at the Green Drug pharmacy; by night, their boss has them filling 'special prescriptions' for clients with ailments that can't be cured using ordinary elixirs. 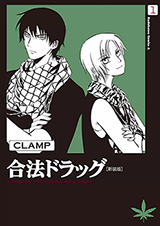 Reboot deterioration
by ayanora
February 21st, 2016, 10:54am
Rating: 7.5  / 10.0
Is it just me, or did the storyline and the art both seem to deteriorate after the reboot? The plot is now basically incoherent, WAY too rushed, while the relationships and ~mysterious reveals~ seem too forced to actually have an impact. Also, seriously, doesn't the art seem more banal than before? The lack of tone or shading is really apparent, and the whole thing just looks...really lazy, actually, with none of the style in the original before the hiatus.
I really think episodic stories worked best for the plot formula. While some of the...mysteries? stories? were slightly dumb before, but the characterizations and interactions were well-written.
Now, it just feels like the skewed pacing of the overreaching arc drama kind of killed the series.
Was this comment useful?  Yes

CLAMP is a group of mangakas who have lost their minds
by fluffypotato
November 8th, 2015, 1:16am
Rating: 6.0  / 10.0
Seriously, their writing gets progressively worse over the years. It's as though their storytelling skills have an inverse relationship with their artwork over time. As they got older, the art got prettier and the writing got more and more convoluted. I was happy when they decided to reboot this story but honestly the characters are so insufferable and this new line makes even less sense than the first one. Every character spouts off ambiguous nonsense that could mean literally anything and adds nothing to the story while they stare off into the distance. What these characters spend 10 whole pages talking about could easily be condensed into one sentence if all the bullsh*t was cut out of it. Why does everyone have to be this uber mysterious asshat who knows everything but won't say anything to the protagonist for NO GOOD REASON. And its not just this story either; these 'dark' and 'mysterious' tropes have extended to the rest of their universe too. But WHY though?? Honestly, if you're going to withold information then you have to at least give the reader some structure to follow along with while they shuffle through filler to get through the interesting bits. But noooooooo. That's not how the story works -_-

Honestly, if the art wasn't so pretty I don't think anyone would ever bother reading their stuff aside from yaoi/shounen ai fans because its just not good. The story overall is filled with too many holes to understand and then when you get to the end, there's always a ridiculous non-sensical twist or a whole bunch of loose ends in an ambiguous ending that's really not even an ending.
I'd only recommend this and other recent CLAMP works if you have nothing else to ready and if you want to look a pretty pictures.
Was this comment useful?  Yes

not worth it
by k.bell11
June 27th, 2012, 10:41am
Rating: N/A
i expected it to be alot better than it was, all the shounen-ai parts seem forced, the plot isn't nearly as interesting as i thought, and the characters are rather flat, find another manga
Was this comment useful?  Yes

They say they want to re-start it....
by catandmouse
October 23rd, 2010, 12:25am
Rating: N/A
....but when? or if ever? They stated in their Clamp no kiseki interview that they really want to finish this...but who knows? I think I'm looking forward to them picking up Legal Drug than even X....but i'd be nice if they picked up any of their dropped/on hiatus series, at least to give us some hope that they will be done...even though if Rumiko Takahashi took 20 years to complete her One-Pound Gospel Manga, then we may still have hope....
Was this comment useful?  Yes

potential
by tolly
February 20th, 2009, 6:40am
Rating: 10.0  / 10.0
It had potential so it's just sad that it's on hiatus.
There are so many interesting mysteries going on. And the relationship between the two main characters is so hilarious. And it makes you want to know how it'll develop on the future.
Anyway, read it...they will have to finish it someday.
Was this comment useful?  Yes

Needs to be completed!
by werehuntress
November 8th, 2008, 8:54am
Rating: 10.0  / 10.0
This manga is on hiatus, a fact that causes me great pain every time i think about it. Its such a good story. The characters are funny and engaging and get up to some of the most ridiculous shenanigans you could possibly think of. The artwork is lovely and Rikuo & Kazahaya have such great chemistry. Must read! As long as you can be patient enough for the possible continuation of the series.

Great
by luzzz
September 14th, 2008, 9:10pm
Rating: 8.0  / 10.0
Legal Drug is a fun and engaging story. Those who enjoy xxxHolic will also enjoy this. Actually, when I think about it Legal Drug and xxxHolic share a lot of similarities: Watanuki shares a similar personality with Kazayaha, as well as Doumeki and Rikuo, and both series deal with humans who have supernatural capabilities. I can't help but get the feeling that xxxHolic was based on Legal Drug. It's a shame though that Legal Drug has been on hiatus for a number of years. I wish CLAMP would devote some free time to completing the story - there are a lot of unresolved mysteries.
Was this comment useful?  Yes

Give me more
by Incantia
October 4th, 2007, 12:07pm
Rating: 10.0  / 10.0
Legal drug is hilarious, i love the way kazahaya acts like a disgruntled cat, and every other characters quirks. As said before the story plot is just unfolding and I'm eager for more. Plus for me it was th first time i laughed so hard at the extra pages at the end of the volume.
Was this comment useful?  Yes

Please - Volume 4 and up!!
by semyprecious
June 27th, 2007, 1:43am
Rating: 10.0  / 10.0
This is one of my favorites; Rikuo & Kazahaya both have such interesting characters , not to mention the fact that although the plot is really just developing, it's not your typical story. I've already read the first three volumes several times. And by-the-way, Clamp art is the BEST. Yes, I do think they have some characteristics of Watanuki & Domeki from xxxHolic. Maybe Watanuki is a little more over-excitable though.
Was this comment useful?  Yes

Awesome stuff!
by Hanjae
November 19th, 2006, 8:25pm
Rating: 10.0  / 10.0
Although it's only been 3 volumes, this manga shows a lot of promise in the way of how the plot is progressing. The main characters, Rikuo and Kazahaya, are both entertaining and attention-grabbing, as are the side characters. The yaoi hints (although CLAMP is denying any intentions of yaoi), are also a highlight, and it definitely helps that both characters are attractive. The mysteries surrounding the characters keep readers on the edge of their seats.

It's a shame this manga is currently on hiatus, but since CLAMP has recently said that it will be resumed in the near future, I'm quite excited to see what will come out next.
Was this comment useful?  Yes