Login to add items to your list, keep track of your progress, and rate series!
Description
Ichiko Usami is a fifteen-year-old runaway girl. One day, while she?s loitering around the riverbed with nowhere to go, a masked boy named Kohaku suddenly appears in front of her! Ichiko faints and Kohaku takes her to the mansion he shares with several others. Even while lost in wonderment at the individualistic residents, Ichiko gradually opens up to them. But why is she somehow frightened by the fallen children shoes? 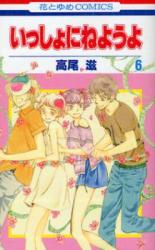 Note: You must be logged in to update information on this page.
Forum Posts Click to view the forum
Haruka and Naoya
over 7 years ago
Issho ni Neyouyo Ends
over 11 years ago

I Am In Love and I my Feelings Are Unstoppable
by Nemurenaiyo
May 14th, 2018, 6:08am
Rating: N/A
I've read her previous works: Dear Mine was fantastic although I did not came to like Teruteru x Shounen as much as I thought I would. Issho ni Neyou yo, though, completely has both my body and soul. I loved the pace (not rushed), loved the character development (from 'eh' to 'holy shit that is my spawn i raised her tooth and nail'), definitely love the art, not to mention the interesting characters. Everything. I am a FAN now. I am combusting because there's no new work from her yet. (Does not mean I won't wait!).

So if you ever have doubts whether or not you should start on this one, oh i'm telling you now, ya should.

(Just for the heck of it but I'm gonna say this here now: Takao Shigeru is a literal queen when it comes to male leads. Her male leads are so frigging cute. Wish I had one myself :') SOBS.)
Was this comment useful?  Yes

Read It You'll Love It
by Dalis
April 17th, 2017, 3:49pm
Rating: 9.0  / 10.0
I don't understand how most people say that they can't understand the story itself but for me it was a well pace story with each chapter flowing smoothly into the next. There are also no unresolved issues or concerns, which was also very refreshing. It has my full votes for also being a nice length, as stories like this are usually too short and anymore chapters would have been tedious. In conclusion, I LOVED IT!!!
Was this comment useful?  Yes

like flashes of dreams...?
by eyma
October 19th, 2015, 8:26am
Rating: 5.0  / 10.0
Besides the main point intended in the story, I can't understand most of the other interactions between characters and the flow of the story is quite messy. I felt like watching the drawings of someone's dreams or forgotten memories.... it's fleeting.. maybe its good? but it's a waste for a story when its not portrayed well enough.
Was this comment useful?  Yes

Quite confusing, but it's good.
by xadako
February 23rd, 2015, 6:29am
Rating: N/A
I don't know if it is the original script, or the scanlation itself, but is it kinda hard to understand the dialogue? Like, for chapter 1-2, I have to reread it to really understand that Ichiko cannot "see" children because of her guilt.I guess there are more confusing dialogues as the story goes on.

Nevertheless, the story is really interesting, and I really love all the characters and their relationship! I believe it isn't easy to draw a character who wears mask all of this time, hiding his eyes and can only show his expression through the mouth and body language.
I don't expect any romance for this manga. Which also means that, even IF there's no romance, the "fluffiness" in this manga is enough to get me to keep reading! Of course, I'd like the characters to be together, but seeing their "family-like" relationship is already good enough. That is why it is such a good manga <3

Ah, but now that I think about it, I kind of disappointed with the change of art style. I prefer the old art style of the artist :c Kohaku's and Haruka's hair got curly in the last volumes of the series. And then the story also changes into something more shoujo-typical plots. Kohaku had a slight (or maybe it is big?) change of personality too. If Ichiko has what people called "character growth", I don't see the same case with Kohaku. He becomes someone who does lots of stupid stuffs and freaking too much, and that is not the same with being a comic relief. Although I kinda like his first appearances when he appears mysterious.....

I really like this manga and decides to stay up until the end, although I feel less eager to read the story now.

A solid 7.
by flowinmyboat
September 13th, 2014, 7:38pm
Rating: 7.0  / 10.0
It started off well enough but as the story progressed it got more and more convoluted. The manga-ka starts sub-plots and hints at things that don't properly get addressed or clarified (the half-siblings, the divorcee's ex-wife, and Ichiko's grandma, especially). Most chapters are vague, to say the least. Also, because of this vagueness, the quasi-nonlinear story line ended up becoming a hinderance. It's not the scanlators fault that this manga was hard to understand.

That being said, I actually enjoyed the manga. The art was cute, the concept was interesting (although it's comical at times, in an incredulous way), and the characters were likeable and memorable. Maybe not in the best ways (looking at you, Kidou family), but memorable. The ending was a wreck though, gotta warn everyone. However, it's a short read so it's worth taking a look.

Is it just me, or..?
by bossmama
January 17th, 2014, 3:26am
Rating: N/A
It's hard to understand anything after vol 5 onward. Well, actually not really that bad, I still can understand the storyline, but I can only grasp half of what the characters were saying. It's... the translation, all right. It's confusing. I'm thankful for the scanlators, but I don't think it means any good if people can't understand your work when you worked it for other people.

It used to be good.
by Ariaofthesong
September 4th, 2013, 12:14am
Rating: N/A
In the beginning this manga was actually rather cool and pretty good. Somewhere around the last volume it just slipped and went down a steep incline. The last few chapters didn't make sense, there were alot of akward panels and actions, Kohaku acted like a freaking five year old. It just grated on my nerves and made me regret even looking at it.

There were alot of problems in the beginning too, but I was able to overlook it because it was interesting, but by the end I couldn't. Kohaku was awesome. Was... He went from being adorable and weird to being creepy as hell and super freaking out there. I just wanted to stab my eyes out. Like seriously... It was good... I can not stress that enough. By the end it was just a sad mess of un-intellilagable gurbage.
Was this comment useful?  Yes

Pretty good!
by zarakia
August 31st, 2013, 7:21pm
Rating: 10.0  / 10.0
Althought supernatural its so freaking realistic. Its the kind of manga that you wish pure happiness to every single one of the characters! It reminds me so much the feeling that i had when i was reading Fruits Basket. I wish for a sequel but that just a silly fungirls wish!!
Was this comment useful?  Yes

whoaaaaa
by dreamit.
August 29th, 2013, 1:23pm
Rating: 10.0  / 10.0
WOW this one definitely blew me away! Everthing about it is so different and refreshing to me! First of all the characters are so real and the mangaka did a great job showing their different sides, their weaknesses and strengths and hidden parts in them. The character development is so clear here that it makes you feel like you grew up with them. All thr struggles they faced and overcame is so precious and golden. The plot itself is so different that it hooks you right from the beginning and you find yourself thinking "what...the heck..... I definitely have never read a manga like this"
The romance is perfect just in case youre wondering if theres any romance at all, there definitely is. Its not cliche and its not "kya kya youre so hot I love you" kind of typical shoujo so brace yourself for this rare jem.
The art is good, no problems there!

All in all, if youre like me and are in desperate need to read something different, looking for a manga to fall in love with then this one would be the perfect choice. You wont regret it.

Love this sensei!!! ♥♥
by Snowflakee
January 13th, 2013, 6:03pm
Rating: N/A
I love the feeling this story gives off. The characters are soo loveable I can't get enough of it! I will totally buy this series as soon as it is available. It is a deff must read and I feel like it will one of the stories that I will reread countless of times ♥
Was this comment useful?  Yes