In New York, behind all the hustle and bustle of the big city, Kazuya and Keith execute "requests" in order to live. No one knows about them. But what happens to people who look directly into Kazuya's jet black eyes?! For some reason, they start to change, little by little. The much-awaited first volume of a romantic horror story between light and darkness. 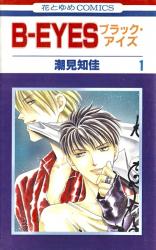 It's good, but not for me
by chaechaeboi
June 3rd, 2014, 8:47pm
Rating: N/A
I tried reading this one multiple times and it simply did not hold my interest. I made about half way through the series. It was boring to me because the fights were lack luster. You get into the head of the protagonist and see how his relationships and past effects his present actions which was cool. I didn't finish it and don't intend to, so I cannot rate this fairly.
Was this comment useful?  Yes

Great Climax and Ending... and Great Overall
by whistlebird
August 7th, 2013, 12:05pm
Rating: 9.0  / 10.0
This is another one of those mangas you don't judge just by the first couple chapters, although you realize that they're actually a pretty good start and connect well with the rest of it later. I almost dropped it at first, but hang on, the characters and the plot will grab you soon. I didn't like Keith at first for some reason, but he's definitely my favorite now because of how his goofy childish side and impossible strength and size and slight insanity coexist so well. His expressions are always priceless XD. Kazuya is a fascinating character too--ruthless, because he was trained that way, but caring because he secretly wants to be-- and his power, while scary (which is good, because it's meant to be), is really interesting. Practically squee worthy by the end!--I got goosebumps from the craziness of what happens. I don't want to spoil much about the plot and romance but just know it gets really good! And the ending was incredible. Kind of impossible, but that's why I love manga. I'll believe whatever the manga-ka wants be to believe so long as it's exciting, and the ending was thoroughly satisfying.
Was this comment useful?  Yes

Pretty decent manga
by poppyevil
January 8th, 2013, 10:19pm
Rating: N/A
Typical shoujo manga with handsome protagonists, althought most of the manga shows action but the main focus is still about how the protagonist change and develop his humanity, along side with romance and stuff . It's a good manga although too predictable and typical, the romance happens to fast so it's a bit cliche. Anyway, It would be better if the mangaka makes it a shounen ai lol, they were such a good couple.
Was this comment useful?  Yes

A splendid read
by Ladyspogmay
January 26th, 2012, 3:50pm
Rating: N/A
Just one word can describe my feelings for B-eyes: Wonderful!
And for those who haven't read the manga yet and are unsure on weather to do so or not, I'm now listing up the facts on why reading it is a MUST.

The Plot:
It's an interesting story which makes you intrigued and excited by only reading the first chapter.(I mean, what doesn't make you squeal when reading about a mysterious hot guy which also happens to have a crazy hot partner??) The plot and story setting is awesome and though some people might think that the manga seems boring and confusing at the beginning, I can assure you that it will become a lot more thrilling when you read deeper into the story. (For me, I wasn't completely caught until the heroine, Lulu, came into the story.) Some might disregard reading B-eyes because it is labled "tragedy", but really, it's not something to get concerned about and definitely nothing that will affect the story into being less awesome. (Maybe I didn't gave it much thought because it was a freaking great read!) The story always surprised me and the twists left me craving for more.

The characters:
The heroes are wonderful!!! Kazuya and Keith's relationship was what made me drool over the manga in the first place. Though their past may seem conflicted, they stay true to each other and have a strong bond throughout the manga.(Which I LOVE!) The struggles they go through leaves a mark in ones heart and as individual characters, they are prisoning. I love the fact that they are goofing around (especially Kieth

) and care for each other like real brother. It's really heart warming.
As a wrote above, Lulu and Kazuya's relationship was what saved the manga from getting uninteresting (his other "woman-relationships" was however agreeable, but really only sidekicks in my perspective...) You keep thinking that Kazuya is this horrible dark killer who hasn't any feelings at all, but Lulu shows you that you are wrong. Lulu is the one (expect for Keith) that drags Kazuya out of his darkness and makes him human. Even though he knows that he shouldn't care for her, he can't help letting her inside his blocking barrier.

The Romance:
The manga getting categorized as "Mature" really exaggerates it. I believe they are referring to the killing in the manga because SPOILERS there aren't really any adultish happening...though maybe some lovely scenes with kisses

The romance isn't the important thing in the plot, which might make it unsatisfying for most romance lovers. The plot is after all concentrating around Kazuya personally, and his story for a happy ending. The romance is just there to make the story more sweet in all the killing and has a underlying affect in the choices Kazyua make. It's brief at the beginning, (Kazuya really has no clue about the other party's feelings...sigh) but as the story develops, the firework's finally make KABOOMS! I was indeed screaming: "Finally!!!!!".
It was worth waiting for

The art:
Really beautiful. Not the typical "large-sparkily-eyes", but more masculine (though not shounen masculine). Cute boys, cute girls....what more can you ask for?? Oh, and the background details and environment are of course great!

All in all, the manga is great and really a worthy read (It's only 4 volumes too!). The ending can seem quite rushed at first, but after reading the whole manga 5 times, I realized it was the perfect ending with all the loose strings finally being tied together. (Though I wouldn't have minded a fifth volume)
If you love action with hot guy's in a "bromance" relationship, (haha no, this is not shounen ai) struggling with themselves, in finding their home and future purposes, then B-eyes is a fabulous choice to read. The manga stands out and isn't a typical read. And as I wrote before, the romance may not always be there, but when it is, it makes you melt with joy

Maybe it's because it's organized in an almost episodic manner. I thought an adorable character from the first few chapters was awesome, but then he was gone and never seen or talked about again.

Lastly,
Spoiler (mouse over to view)
So far, I'm not sure why this is labelled romance yet. Sure, there are...some forms of feelings occurring, but... no romance.
Was this comment useful?  Yes

worth reading
by shiro_13
June 24th, 2011, 11:43am
Rating: 9.0  / 10.0
i can't stop reading this manga.it's not long,but it isn't boring,either. great art style,but that kind of good ending wasn't something i was looking forward to...but,anyway,it's something i can recommend.
Was this comment useful?  Yes

captivated
by Rorii
December 27th, 2010, 6:20pm
Rating: 10.0  / 10.0
I truly liked the characters who were, as said before, really well developed, amazing battles, beautiful love stories, everything. If you look for bishies there are a lot and they are all strong guys with sad past. I was surprised so many times by the story. And what a story ! The only bad point is the end.

Another story which could have had more chapters. But it didn't ended too fast either. What I didn't liked about the end is what happens to the characters, but it's only my opinion. There is no random so it's ok.

It doesn't matter whether you are a guy or a girl, just read it ^^

Great
by KittyTeea
July 24th, 2009, 10:55am
Rating: 10.0  / 10.0
I loved the story, the characters and the art. The story doesn't fall in any of the usual cliches, and even though there are only 4 volumes the character development is amazing; this manga is seriously underrated so I'll give it a well deserved 10.