Login to add items to your list, keep track of your progress, and rate series!
Description
Pandora's Box led a cursed existence. Through the curiosity of a woman, evil was unleashed and very nearly covered the world in darkness. Miraculously, humanity managed to seal Maou Kestra back into the box, but only with immense sacrifices. Even without their lord, the demons are still a formidable force that has only grown stronger with time, locked in the abandoned capital of the North, Hameln. Fifteen years have passed since that fateful battle...

Enter Hamel, a travelling minstrel who is so self-centered that he'd sooner cook his guardian crow (and family friend), Oboe, than go hungry f... More...
Pandora's Box led a cursed existence. Through the curiosity of a woman, evil was unleashed and very nearly covered the world in darkness. Miraculously, humanity managed to seal Maou Kestra back into the box, but only with immense sacrifices. Even without their lord, the demons are still a formidable force that has only grown stronger with time, locked in the abandoned capital of the North, Hameln. Fifteen years have passed since that fateful battle...

Enter Hamel, a travelling minstrel who is so self-centered that he'd sooner cook his guardian crow (and family friend), Oboe, than go hungry for even a minute. Welcome to the world of music and hilarious insanity that is the Violinist of Hameln. Watch as Hamel takes cheap shots at his opponents and bashes pigeons with his giant violin and turns them into dinner.

How WILL the world be saved from Maou Kestra (it's a pun for orchestra, if you haven't noticed) with a hero such as this? Less... 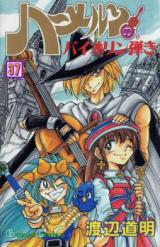 Note: You must be logged in to update information on this page.
Forum Posts Click to view the forum
Violinist of Hameln
over 13 years ago

Please don't ask me that. The art isn't that terrible in the beginning, so please go ahead and read it: Maybe you'll like it. (and don't forget rule 3....no eating/drinking with this manga....)
Was this comment useful?  Yes

but when the story continue... these is deep and touching story... so many ppl suffer... i love most charactor here... all charactor who aren't demon have pure heart but show their thinking in different aspect due to their raising and experience.

sizer is truely woman warrior... she is sharp and quick thinking... and with little shyness that make her charactor stand out....so she is both cute and reliable comrade.

flute also take a lot of part in the story... i hate the story where main heroine is useless and flute is rare breed type of heroine since.... she got dress up in many ugly way and being used as a comical stuff for the story.

trombone.. too, he become fine swordman from a cry baby and i feel like some boy whom i know now grown up and be happy with him.
may be because i follow this series since the first volume just out in my country.. it's been so many years till the last volume came up.
Was this comment useful?  Yes

Excellent
by quijote3000
September 25th, 2008, 7:24am
Rating: 10.0  / 10.0
I can't believe it doesn't have a higher rating. Sure, the first chapters are not so good, but then the development of the story, the rollercoaster the characters suffer, not only in actions but in feelings, the suffering...
This is a manga that in one page you are in the ground laughing your ass off, and the next moment the manga becomes so sad.
Truly, one of my favs manga.
Was this comment useful?  Yes

i hope it is 'cause it's one of the best mangas ever...please someone tell meeee!, and another thing, where can i find the manga complete zip?
Was this comment useful?  Yes

Outrageously awesome!
by takotan
April 4th, 2008, 3:20pm
Rating: 9.5  / 10.0
It's full of crack and angst and stuffed with references to classical music! What's not to like? Sure, it's long and episodic and the art is sketchy, but that just adds to the charm.
Was this comment useful?  Yes

It's really great, but....
by ruby717
March 29th, 2008, 4:53pm
Rating: 9.0  / 10.0
Because the story is so good, and the characters are so well developed, the art becomes a trivial thing. But my problem is, T_T, the ending is super super sad. It is one of the saddest ending that I've ever read. Until now, I still can't believe that such a hilarious manga has such an awful ending T_T

I can only say this is probably not THE best manga out there, but it sure is the second. Great characters (Sizer-best female character ever IMO, next to Erza in Fairy Tail), clear plotline that's easy to follow (and it's an extremely important thing for a manga of this length)...and did I mention full chapters of humor? Don't worry it doesn't drag and for someone like me who loves rambling nonsense it makes me feel at home

). Extra points for jokes right inside tragic moments that, by some unknown superpower of the mangaka, DON'T seem out of place.

The artwork. Yes. Major trouble here. But remember this series started around 91 and the mangaka's main job was as a voice actor I think, but you'll have to bear with it. If a story with average artwork made ME read it (someone who reads pure crap stories just to gawk at the artwork) then it's definately worth a few nights up and skipping school/work.
Was this comment useful?  Yes

takes time
by tribal2199
September 3rd, 2007, 10:54am
Rating: 10.0  / 10.0
This is a great manga that takes time getting into but don't be fooled by the first few chapters. The artwork isn't the best but as the story progresses, I've found that this matters less and less.One of the few manga's out there that can have you laughing one minute and crying the next.10/10

nice one
by kamasutra69
July 29th, 2007, 9:30pm
Rating: N/A
artwork worst
but jokes saved the day
-please be the salvation of the town"
"i want to see you dance"
what can i say
Was this comment useful?  Yes

One of the most engaging series ever.
by ViolistofHameln
July 13th, 2007, 6:01pm
Rating: 9.5  / 10.0
VoH is definitely my favorite manga series of all time, and that's saying a lot, because it's a lo~ong series -- and I hate those. So why did I give it less than a 10? Because it is a long series, and therefore tends to get repetitive in some respects, especially when it keeps re-iterating common themes, almost like the whole "With great power comes great responsibility" fixation in Spider-Man. Despite this, the huge cast of characters and the growth of said characters throughout the series is one of the best aspects of VoH, not to mention a very unique spin on the cliche manga staple of "Demon must fight to save humanity from demons."

@phanzanu : You should really keep going with the series. The art changes drastically (as with Ah! Megamisama/My Goddess!) as the series progresses, which is very understandable as it lasted a good 10 years in print. I don't mind the early art, but after reading volume 25 or so, then flipping back to volume 1, the change is astounding. Give it another shot