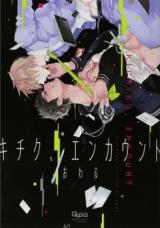 Oddly Funny
by Caedis
July 29th, 2017, 4:26pm
Rating: 7.0  / 10.0
If you don't think of this manga so seriously you'll like it better. Obviously no one should emulate the character's actions, that's not what the mangaka was trying to show anyway. More often than not this reads almost like a gag manga, and I think you should take it as such.

Lol
by OmNom
March 11th, 2016, 6:25am
Rating: N/A
I am one of those who do not take this manga too seriously, and I think the story itself does not do that either. The manga's not really a parody, but you can see how the mangaka is at least moderately aware of the usual tropes brutally milked (*ba dum, tss*) in rape stories/the AV industry, and intends to use those exact tropes to make her own rape manga, though with a BL spin on it.

The manga's strong point is definitely the characters' chemistry, and so although rape is still rape, the book doesn't leave you with the bitter aftertaste following the typical awful dub-con meat-fest or psychologically disturbing non-con scenarios where every party involved end up pretty ruined and messed up; thus allows room for believable romance to blossom, at least by the standard of a rape story. That's not something you see everyday, so I gotta give the author props for accomplishing that feat.

And aside from all the logic talk, who can deny the eye-candy artwork and all those pretty d*cks, lol. I also love the chibi drawings, they're so cute and funny and part of the reason I like the characters quite a lot, even if their relationship might not be of the most healthy nature. Anyone with an open mind should give this a try, it's surprisingly not as bad as it seems, and the bonus point is it's really hot too.
Was this comment useful?  Yes

I really enjoyed it
by juls91
February 10th, 2016, 6:42pm
Rating: 8.0  / 10.0
lol it was funny, cute, simple, steamy and overall entertaining ^_^ . I liked the characters and i think it was better than Junjou bitch. Of course it wasn't deep or meaningful but its fine for a quick read

What a failure... My bad. I was deceived by the cover - it looks promissing
by kidoraku
January 10th, 2016, 1:59pm
Rating: 3.0  / 10.0
it looks hot and it seems that the art is very pretty but it's not like that inside. It's a rape=love kind of story with average plot and rather stupid characters and weak sense of humour. Every chapter is about Mr. Violent and Mr. Pathetic having sex.

I just don't get why the mangaka decided to draw main characters in such a ridiculous way - I mean the seme looks awesome, he's hot and you can't complain bout anything, on the other hand the uke looks like a child in elementary school, he looks ridiculous and out of the place, to the point you have a feeling you're reading shota. Because of his face it's unpleasant to look at them when they hook up.

The only good thing about this manga is one shot, it's simple but it's ok. There won't be a recommendation, sorry.
Was this comment useful?  Yes

A tragicomedy?
by Nirhtuc
September 15th, 2015, 6:00am
Rating: N/A
Not even the art or the slutty factor can redeem this manga, in my opinion. Rape is rape and never acceptable. There are some BL manga in which rape serves a significant role in the plot, but we cheer on the love interests to live happily ever after. Why? Because the characters both have positive qualities albeit being in a very complex and unusual situation- a great example is Sono Kuchibiru Ni Yoru No Tsuyu. There is mutual suffering and you can empathise with both characters to some degree or other. Not so in Kichiku Encount! The seme is a horrible sociopath, basically; and the uke is a weak and confused catastrophe. I would put 'tragedy' in the genre labels if it didn't look so ridiculous! I think it truly would be a tragedy if these two stuffed up characters somehow end up together in the end! To make matters worse, there is a lot of humour thrown in as well- I'm not sure what the mangaka was thinking. Perhaps this is meant to be a satire or parody of the yaoi rape trope. I have to say that the scanlators are doing a great job on this manga, though. I will keep reading it to see if the story can get any more messed up.