Login to add items to your list, keep track of your progress, and rate series!
Description
From Prisms:

A romantic comedy about Fuwa, a guy living in a small apartment in overcrowded Tokyo, who wants to have a place of his own. Because of a building accident in their new office building, Fuwa's company (5 employees) had to move into his apartment, right after he had moved to a larger place. And the new employee (Hiyama Izumi, a 15 year-old girl) had to move into Fuwa's place, as she had just come from the country. Then Fuwa's old girlfriend Tokiko, who had already gotten married, ran away from her husband and came to Fuwa's place. 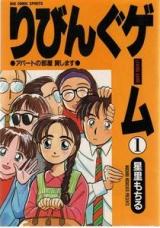 Note: You must be logged in to update information on this page.
Forum Posts Click to view the forum
I just finished this and I have to say, I loved it except...
over 5 years ago

I love this
by kzh01
April 25th, 2020, 2:22am
Rating: 9.5  / 10.0
I love this manga so much, it's realism is one of the appealing thing about this manga. We got a 27 year old adult and a 17 year old, each with their positive and negatives and unique charachteristic, which also comply with their age. i like how the mangaka make izumi as the childish, and sometimes annoying selfish kid, because well, she is 17 so it make sense for Fuwa to be the adult in many instances. But imo there's no growth for izumi as a charachter, which again i dont say she needs that growth, adding to the realism sometimes teen needs time to grow, not in an instance. But i really do hate Tokiko and her husband. you'll see what i mean if you read the manga.
Was this comment useful?  Yes

Romance is well done, handling of other themes less so
by Aegnorosto
April 25th, 2018, 3:07am
Rating: 9.0  / 10.0
While Living Game can be criticized for not fully exploring its themes of finding a place for yourself and making decisions between a profitable career vs. pursuing your dreams, these criticisms are tangential to the main strength of the series, which is in how the author is able to maintain a constant sense of forward progression in the relationship between the two main characters*.

Read Living Game if you want a slow romance between characters dealing with adult concerns (like problems at work, problems finding a place to live, and struggles with pursuing dreams as a working person). Don't read living game if you expect the focus to be on fully exploring the problems of living and working in Japan in the 80s and 90s (those elements usually exist in the background, and when they are brought into focus they share screentime with how Fuwa and Izumi's relationship is affected).

*Breakdown of how Fuwa and Izumi's relationship is handled (minor spoilers for the general structure of the series):
There are a couple of major factors that play into maintaining this sense of development in Fuwa and Izumi's relationship. First is that both of the leads are self aware enough to recognize their developing feelings for each other, and are socially adept enough to recognize that their feelings may be reciprocated. This means that while all romantic scenes in early chapters are undercut (and often turned into the punchline of a joke), there isn't the sense of annoyance that would develop in a different series where this would doom the characters to remain oblivious to their own feelings and/or the feelings of their counterpart.
The other major factor in keeping the series from becoming an endless purgatory of ambiguous relationships is that the overarching conflict in the series is driven by its exploration of its other themes (and, in fact, this might explain why those themes are not examined fully, since it seems plausible that they exist only to provide a way to introduce conflict that doesn't involve forced melodrama in Fuwa and Izumi's relationship). The existence of external conflicts unrelated to the relationship between the two leads allows the author to resolve problems between the two leads quickly without leading to stagnation of the overall plot. Other series would draw these problems out for as long as possible, but in Living Game the conflicts in Fuwa and Izumi's relationship rarely last more than a few chapters at most.

Beautiful philosophy
by huangzu12
December 20th, 2016, 5:44am
Rating: 10.0  / 10.0
I read this manga seven times, and until this time I write a short review about it. I love the characters and story of this manga, all of them are perfectly in harmony. Izumi is childish, but she still too young to face the adult world or have a serious relationship. Because of that, Fuwa is very patient with her, this is realistic about age gap relationship in real world. Time of adult is very different from the time of the young girl, you know. So the ending is good when Izumi finally catch up with Fuwa.
Was this comment useful?  Yes

Almost perfect
by SangMo
October 25th, 2016, 1:13pm
Rating: 9.5  / 10.0
I loved the comedy. I loved the romance. Fuwa and Izumi were great characters. The office workers were great characters. I loved all the characters except Tokiko & her husband. They are the very definition of a dysfunctional marriage. They are what ruins it from being perfect. He's a complete scumbag who neglects & hits her and she's an idiot for going back to him time and time again because she does this soooo many times. Most of the time it came off as a joke that she would leave her husband, but honestly that just made it worse. I started to drift when it became more and more about them. She was a likeable character at first until it got more into her story with the husband and then it spiraled. There were times where you were supposed to feel bad for the husband, but again he just came off as a complete scumbag. Worst of all
Spoiler (mouse over to view)
she gets pregnant with that scumbag's baby and of course goes back to him and then after she leaves with him, they joke about her running away again.
I've never seen a more frustrating couple in a manga than I have with Tokiko and her husband.The last 2 volumes were good because you didn't see them until the end
Spoiler (mouse over to view)
where she comes back AGAIN, pregnant & talking about divorce and her idiot husband right behind coming to argue with her.
All in all, a really good romance slice of life where its perfection is ruined by 2 highly unlikable characters. I know this review is mostly about ranting Tokiko and her husband, but seriously, they are the one flaw of this manga.
Was this comment useful?  Yes

Excellent
by yoannjuan
August 7th, 2014, 9:17am
Rating: 10.0  / 10.0
This manga is still one of my favorites of all times. Fun situations and great characters all around in this touching story. It has a good insight into the land speculation crisis in Tokyo.
Very much recommended if you have liked Usagi Drop for example.

Possibly the biggest disappointment in manga
by Fundefined
December 4th, 2013, 10:53pm
Rating: 6.0  / 10.0
I loved the first two volumes of Living Game. It was fun, wacky humor with likable characters and hinted at a greater theme being subtly discussed. And then it gradually gets worse and worse until it becomes nothing but stupid drama that reads like a rejected k-drama script. I've honestly never read another manga with such a slow and excruciating fall from grace. Rushed and unfulfilled endings? Sure, there's a million of those. But Living Game is unique in how painfully slow it commits suicide.

it's alright , even recommended
by qu1eet
April 17th, 2011, 6:48am
Rating: N/A
I'll recommend this as a light read, just keep an open mind, don't look too much for H(there is no raping or any anything of this sort, don't listen to small minded people) and read this nice manga light headed

annoying
by alldark
March 29th, 2011, 10:15am
Rating: N/A
Spoiler (highlight to view)
She so pure and naive that even they lived together more than year they dont do anything. But then turns out that her father kick her out of town coz she slept with her classmate. And than drama, cliche, drama, cliche. As always when author try to milk some money and make more volumes than story really need.

Don't Listen to goldminer and Taopaipai
by Jigero
December 3rd, 2010, 3:33pm
Rating: N/A
Both have no idea what they are talking about, they don't have sex when she's 15.
Spoiler (highlight to view)
it doesn't happen until she's 17 just about to turn 18

God forbid they actually read a manga instead of writing it off because of their prudish values that don't even apply to this.
Was this comment useful?  Yes

yes
by goldminer
November 7th, 2010, 1:35pm
Rating: 4.0  / 10.0
I agree with TaoPaiPai in every aspect. An age gap of ten years and more seems very popular in manga. I can tolerate a 30 years old woman marrying a 40 years old man, but definitely not a 15 years old maiden falling for a 25 years old man at first sight. That comes very close to pedophilia. It saddens me to say this but the more manga I check the more I am becoming covinced that it consists to 80% of perversion. Why can't there be more works like Emma?
Was this comment useful?  Yes